Norway’s National Museum of Art, Architecture and Design to Open in Oslo this June 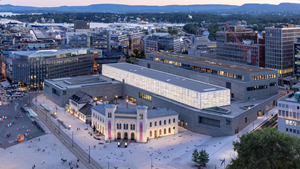 Norway’s National Museum of Art, Architecture and Design has announced that it will be ready to welcome visitors from June 11, 2022, during summer.

Norway’s National Museum of Art, Architecture and Design has announced that it will be ready to welcome visitors from June 11, 2022, during summer.

“We are inviting visitors to join us and have a look inside while the art is being mounted and the museum is taking shape,” said Karin Hindsbo, Director of the museum.

Organised, prebooked tours free of charge will start as soon as local coronavirus restrictions are lifted, allowing visitors into selected parts of the interior, including exhibition rooms and the exterior of the brand new building designed by Kleihues + Schuwerk.

5000 works of art and a glowing exhibition hall

With the new National Museum, Norway gets a unique space for the country’s most extensive collection of art, architecture and design. More than 5000 works, from the antiquity to the museum’s most recent contemporary acquisitions, will be on display in a collection exhibition that spans two floors and almost 90 rooms. The building also includes a spectacular space for temporary exhibitions - the Light Hall situated on the roof - as well as a large open-air roof terrace, cafés, a shop, and the largest art library in the Nordic region. Situated on Oslo’s harbour close to the promenade, the museum offers spectacular views of the city.

The museum is designed by German architects Kleihues + Schuwerk and built by Norway’s government building commissioner Statsbygg. Designed with the perspective of housing artworks for centuries, the museum is built with clean and robust materials that will age with dignity, like oak, bronze and marble. The entire facade is covered with Norwegian slate. As a FutureBuilt pilot project, the new museum is designed to reduce greenhouse gas emissions by at least 50% compared to current building standards.

On permanent display works from all the National Museum’s various fields – older and modern art, architecture, design, craft and contemporary art – will meet and interact in new contexts.

For opening, the Light Hall will be filled with an extensive survey of new Norwegian Contemporary art featuring almost 150 artists and artist groups of all ages and covering all the museum’s fields.

The full programme for the opening year will be launched later this year.

The National Museum of Art, Architecture and Design