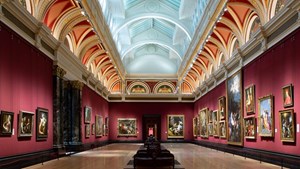 This research project brings together data that helps us to understand and acknowledge the role that slavery has had in the history of the National Gallery.

This research project brings together data that helps us to understand and acknowledge the role that slavery has had in the history of the National Gallery.

Some art collectors, connoisseurs, donors and founders of museums and galleries across Britain were slave-owners or benefitted financially from the trade in enslaved people.

Our project has started to find out about what links to slave-ownership can be traced within the Gallery, and to what extent the profits from plantation slavery impacted our early history.

Phases I and II of the Research Project

We are one of many UK museums and historic collections that are working to make the history and origin of their collections more accessible and transparent.

The research project started in 2018 when we approached Dr Nicholas Draper, a founder and then Director of LBS, and established an academic partnership to undertake systematic research into key figures in our history.

The first person researched was John Julius Angerstein (1735–1823). This is because, in 1824, the British government purchased 38 of Angerstein’s pictures as the foundation of the national collection. Working for what became Lloyd's of London, Angerstein amassed a fortune through broking and underwriting marine insurance. An unknown proportion of this was in slave ships and vessels bringing to Britain produce cultivated in the Caribbean by enslaved people. Angerstein acted as a trustee of estates and enslaved people in Grenada and Antigua.

To date, the research project has focused on 19th-century trustees and donors, as well as some important sitters and painters. The first two phases of research have been completed, covering the period from 1824 to 1880.

We have gathered succinct data, covering whether:

The data has been generated primarily through consulting three well-respected online resources noting whether any of them contain an entry for the person under review.

The online resources are

We have linked that data to National Gallery pictures associated with that person, including any works transferred elsewhere, including Tate. This data is now searchable through our website.

We have taken an all-encompassing approach when identifying connections with slavery that may arise out of:

Therefore, inclusion on this list should not be understood to imply a direct connection with slavery.

For convenience of use, the individuals researched have been grouped according to the type of known connection with:

The presentation of the data aims as far as is possible to present objectively, facts relevant to the long and complex history of the transatlantic slave trade. From the information provided, users will be able to determine for themselves the nature and extent of these connections.

All data has been reviewed by Dr Draper, and we received advice on appropriate terminology from Marenka Thompson-Odlum, Research Associate at the Pitt Rivers Museum and doctoral candidate at the University of Glasgow, whose thesis explores Scotland and the transatlantic slave trade through material culture.

We are now embarking on phase III of this research project, which will cover our trustees and donors from 1880 to 1920; thereafter, we will begin phase IV, which aims to cover past picture owners as far back as 1640.