Mark Hallett Appointed As New Director of The Courtauld 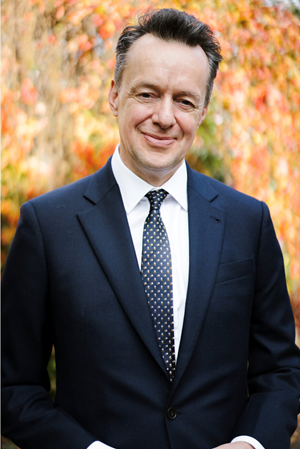 The Courtauld Institute of Art has announced that the accomplished art historian, curator, and academic leader Mark Hallett will be its next Director, the ninth in the history of The Courtauld since its founding in 1932.

The Courtauld Institute of Art has announced that the accomplished art historian, curator, and academic leader Mark Hallett will be its next Director, the ninth in the history of The Courtauld since its founding in 1932.

The appointment comes half a year after Professor Deborah Swallow announced that she would be stepping down as Märit Rausing Director at the end of this academic year, after almost twenty years in the role.

Following a rigorous international search over many months, the Succession Committee selected Professor Hallett, currently Director of the Paul Mellon Centre for Studies in British Art. The appointment will take effect on 1 August 2023. From 1 April 2023 Professor Hallett will be Director-designate.

Announcing the Governing Board’s unanimous decision, the Chairman Lord Browne of Madingley said that Professor Hallett brings with him “a reputation for scholarly work at the highest level, broad curatorial experience, and excellent management skills”, adding that  he is “well-equipped to lead the institution as we implement the next phase of our ambitious development initiative”.

Under Professor Hallett’s direction, the Paul Mellon Centre has become known for supporting and publishing research on British art and architecture of all periods, and for pioneering efforts to broaden the field of British art history and open it up to a wider range of individuals. In early 2022 the Centre launched its New Narratives initiative, a set of awards designed to support students and researchers from a diverse range of backgrounds.

Professor Deborah Swallow said she was delighted with the panel’s choice: “I believe Mark will be an excellent Director and will take this extraordinary institution forward to a new and exciting future. I know I shall be leaving The Courtauld in very safe hands.”

“It is a privilege to be asked to lead The Courtauld at this time in its history” said Professor Hallett. “Famous for its path-breaking research, outstanding staff, superb collections and newly renovated Gallery, The Courtauld is one of Britain’s great jewels, attracting a global community of scholars, students and visitors.”

Professor Hallett also expressed his great appreciation to his predecessors, and especially Professor Deborah Swallow, for “helping to make The Courtauld a uniquely dynamic, inclusive and intellectually stimulating place in which to encounter and study the art and architecture of all periods, from all across the globe.”

The Board’s unanimous choice to lead The Courtauld through an era of bold transformation, in his current role, Professor Hallett has overseen a major expansion of the Paul Mellon Centre’s premises, personnel, activities and remit.

An alumnus of The Courtauld (having been brought up in mid-Wales, and attended school in Tregaron, Cardiganshire, Hallett took his BA (1986) at  Cambridge University, and his master’s degree (1989) and a PhD (1996) at the Courtauld Institute of Art), Professor Hallett has run a university department, is a well-known practitioner of the humanities in art history, and has a proven track-record of leadership with twenty years of experience.

The appointment comes at a seminal moment in the life of The Courtauld. With the first students moving into the new Linbury Conservation Centre in Somerset House in September, Phase One of Courtauld Connects, the biggest programme of development in our history is now complete, and the development of Phase Two is underway.

Thanking Professor Deborah Swallow for leading and advancing The Courtauld’s many accomplishments over the past two decades, Lord Browne expressed his appreciation “for all she has done to support this extraordinary and unique institution.”

Lord Browne also thanked the Succession Committee for their professionalism and for their dedication to The Courtauld, alongside staff from The Courtauld, who — along with the current and former student union presidents —participated in the process, providing important insights.