Lucas Museum: Its Collection, Building, and Park, Developing to Create an Institution Dedicated to Narrative Art 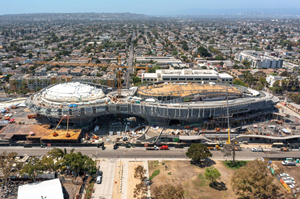 The Lucas Museum of Narrative Art today announced the latest details in creating this new institution–the first of its kind devoted to the meaning and impact of narrative art–now being constructed in Los Angeles’s Exposition Park.

The Lucas Museum of Narrative Art today announced the latest details in creating this new institution–the first of its kind devoted to the meaning and impact of narrative art–now being constructed in Los Angeles’s Exposition Park.

Sandra Jackson-Dumont, Director and Chief Executive Officer, revealed major milestones now achieved in constructing the five-story, 300,000-square-foot building, developing the park and gardens integrated into the 11-acre campus, and expanding the museum’s collection, all leading toward the opening in 2025. “It’s humbling and energizing to see how all aspects of this new public resource are taking shape,” said Jackson-Dumont. “We believe that narrative art can connect us and help shape a more just society. As a result, every element of this institution contributes to that idea—the site is one physical manifestation of that. The campus with its iconic building and arched belly that creates a canopy, coupled with the 200-plus trees taking root in the park, together create another community gathering place with much needed shade for our neighbors and others who will use the site. Another manifestation of that idea is the museum’s wonderfully evolving collection of narrative art that features multifaceted perspectives through the stories humans have told throughout history. Through these works, we hope to ignite complex and nuanced conversation that may impact the ways folks understand the world, but perhaps even what they decide to do in the world. We’re thrilled to share this significant progress, and I look forward to keeping the public informed as we forge ahead.”

Creating a Collection Made of Stories

Spanning from ancient Roman mosaics to Renaissance painting to contemporary photography, and representing diverse cultures and artistic media, the museum’s collection demonstrates the breadth of themes and viewpoints with which narrative art can engage dynamic and diverse publics. “Through narrative art, people from every age and background can find connections between their lives and the lives of others across eras, cultures, and regions of the globe,” said Pilar Tompkins Rivas, Chief Curator and Deputy Director of Curatorial and Collections. Narrative art has an incredible capacity to challenge the beliefs and values of a society as can be seen in George Washington Carver Crossing the Delaware: Page from an American History Textbook (1975) by Robert Colescott, which the Lucas Museum brought into the collection in 2021. Other additions to the collection like For Freedoms’ (Hank Willis Thomas and Emily Shur in collaboration with Eric Gottesman and Wyatt Gallery of For Freedoms) For Freedoms II (2018) and Kadir Nelson’s Art Connoisseurs (2019), both contemporary responses to Norman Rockwell’s well-known works—of which the Lucas Museum collection also has deep holdings, along with Cara Romero’s The Last Indian Market (2015), a photograph of contemporary Native artists posed in the style of Leonardo da Vinci’s The Last Supper, reimagine societal visual mythologies to reflect our diversity and complexity.

One of the principal functions of narrative art—to express and transmit the beliefs and values of a society—is exemplified in the addition of The Judgment of Solomon (1526) by Lucas Cranach the Elder. This reverent visual narrative joins other works in the collection that tell stories from the Bible or religious lore, such as Triumph of Galatea (c. 1650) attributed to Artemesia Gentileschi and Onofrio Palumbo. Another addition to the collection that speaks to how stories continue to resonate over centuries and across borders is John Singer Sargent’s Las Meninas, After Velásquez (1879), a copy painted more than 200 years after Diego Velázquez’s original. The Lucas Museum collection also has deep holdings of work by Ernie Barnes, who created some of the twentieth century’s most iconic images of African American life, including The Drum Major (2003).

The era of mass production and distribution brought new uses and meanings for the transmission of visual narratives. Works created for mass reproduction point to the broad societal reach and impact of widely circulated objects from material culture as well as commercialized images. Additions to the museum’s extensive collection of original works created for comics, books, and magazines include Alex Raymond’s Flash Gordon issue number 1 (1933), Jaime Hernandez’s alt comic Love and Rockets (2010), which he created over 40 years with his brothers Gilbert and Mario, and children’s book illustrations by Jerry Pinkney for Black Cowboy, Wild Horses: A True Story (1998) and Weshoyot Alvitre for At the Mountain’s Base (2019), her book about a Navajo World War II pilot. The addition of Kerry James Marshall’s RHYTHM MASTR Daily Strip (Runners) (2018) to the collection presents the artist’s response to the absence of black superheroes, characters, and environments in mainstream comics.

The 11-Acre Campus Comes to Life

At the center of the museum’s 11-acre campus is the innovative building designed by Ma Yansong of MAD Architects with Michael Siegel of Stantec as executive architect. Taking inspiration from large trees in Exposition Park, which provide places of shelter and gathering, Ma envisioned the building as an extension of that tree canopy, lifting at its center to create a gathering space in the central plaza. To realize the building’s organic, biomorphic surface, the structure will be clad in more than 1,500 curved fiberglass-reinforced polymer (FRP) panels, each uniquely shaped and placed to create the whole. In a major construction milestone, installation has now begun of these panels, which are now being fitted onto the southern façade.

The Lucas Museum’s park and gardens, designed by Mia Lehrer of Studio-MLA, will provide an expansive, multilayered experience fully integrated with the building, which will be heavily programmed for museum audiences and the local community. The 11-acre museum campus replaces an asphalt parking lot and opens and activates Exposition Park’s western edge for the neighboring community by creating new access points into the park. In another milestone for the Lucas Museum, the first of more than 200 trees are now being put into the ground, which will change visually with the seasons, offering new experiences during each visit to the Lucas Museum. Whereas water runoff from the previous asphalt parking lot went into the city sewer system, the museum’s new landscaping uses a rain-harvesting system to capture water for irrigation. Other major architectural features of the park and gardens, including the amphitheater, hanging garden, and pedestrian bridge, are also now taking shape.

As a core element of its construction program, the Lucas Museum has worked closely with its contractor, Hathaway Dinwiddie, and the City of L.A. to set and meet ambitious goals for local hiring and for increasing the pipeline for subcontracting with businesses owned by women, minorities, and veterans. Through robust community outreach efforts in partnership with Slate Z, L.A. Trade-Tech, the City of L.A., local unions, and other workforce development nonprofits, the building project to date has employed more than 4,200 workers, more than 60% of whom live in Los Angeles County.

About the Lucas Museum of Narrative Art

As the first museum to focus exclusively on storytelling through images, the Lucas Museum of Narrative Art believes that visual storytelling can connect us and help shape a more just society. With a growing collection that encompasses artworks from across cultures, places, times, and mediums, including paintings, sculptures, murals, photography, comic art, book and magazine illustrations, and the arts of filmmaking, the Lucas Museum will explore narrative art’s potential to prompt questions, invite opinions, inspire community, and move people to think about the impact of images on our world.

Co-founded by George Lucas and Mellody Hobson and led by director and CEO Sandra Jackson-Dumont, the Lucas Museum was designed by renowned architect Ma Yansong of MAD Architects with Stantec as executive architect and will open in Los Angeles’s Exposition Park in 2025. An 11-acre campus with extensive new green space designed by Studio-MLA will embrace the museum’s 300,000-square-foot building, which will feature expansive galleries, two state-of-the-art theaters, and dedicated spaces for learning and engagement, dining, retail, and events.