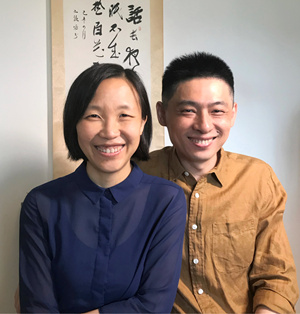 The Organizing Committee for Yokohama Triennale (Chairperson: Kondo Seiichi [Chairperson, Yokohama Arts Foundation]) has appointed the team of Liu Ding and Carol Yinghua Lu as artistic director of Yokohama Triennale 2023, the 8th edition of the tri-annual event. The Triennale will be the first major event held at Yokohama Museum of Art after extensive renovations are completed. The event’s second venue will be PLOT 48. This edition of the Triennale will be the first to be held in winter.

Liu Ding and Carol Yinghua Lu are an artist and art historian respectively who started joint curatorial work in 2007. Based in Beijing, they have participated in international exhibitions around the world including the Venice, Gwangju, Istanbul and Busan biennales. In a time of historical flux, their curation seeks out kernels of wisdom for surviving the present in both the minutiae of individual endeavor and the grand turning points of history. Their frame of reference transcends time and place, as they seek ideas in everything from traditional oriental philosophy to the globalized lifestyles of the 21st century. The Yokohama Triennale welcomed its first non-Japanese artistic director for its 7th edition in 2020. Since then the ongoing challenges of COVID-19 and war have shown us just how inextricably interconnected our world has become. For the 8th edition, we once again welcome as artistic director a team that is active on the global stage, and with them we look forward to creating an event that is open to the world and that takes advantage of our port city’s role as a crossroads of people and culture.

Carol Yinghua LU Carol Yinghua Lu is an art historian and a curator. Born 1977 in Chaozhou City, Guangdong Province and now based in Beijing. She is Director of Beijing Inside-Out Art Museum, where she’s recently curated “Wang Youshen: Codes of Culture” (2022). She was Artistic Director and Chief Curator of OCAT, Shenzhen (2012-2015) and CoArtistic Director of Gwangju Biennale (2012). She was a contributing editor for frieze magazine (2008-2018), a recipient of ARIAH East Asia Fellowship (2017) and visiting fellow in Asia-Pacific Fellowship Program at Tate Research Centre (2013). She has acted as a jury member for many art prizes, such as Tokyo Contemporary Art Award (2019- 2022), Rolex Mentor and Protégé Arts Initiative (2019), Hugo Boss Asia (2019), International Award for Art Criticism (2014), Future Generation Art Prize (2012), and Golden Lion Award at Venice Biennale (2011).

Liu Ding and Carol Yinghua Lu commenced their joint curatorial activities in Beijing in 2007. Their recent co-curated exhibitions at art institutions across China, such as Beijing Inside-Out Art Museum, Art Museum of Guangzhou Academy of Fine Arts, and Beijing 798 Creative, include, “Notes: Chinese Artistic and Intellectual Voices from the End of the Twentieth Century,” (2022); “Waves and Echoes: Postmodernism and the Global 1980s,” (2021); “Waves and Echoes: A Process of Re-contemporarization in Chinese Art Circa 1987 Revisited,” (2020), “Factories, Machines and the Poet’s Words: Echoes of the Realities in Art,” (2019), “Salon Salon: Fine Art Practices from 1972 to 1982 in Profile - A Beijing Perspective,” (2017) toured to Art Museum of Guangzhou Academy of Fine Arts, Guangzhou (2020). Other co-curated exhibitions include, Trans-Southeast Asia Triennial: “Sounds as Silence: The Academic Value of Life,” Guangzhou (2021), Anren Biennale: “Crossroads,” Anren (2017), Shenzhen Sculpture Biennale: “Accidental Message: Art Is Not A System, Not A World,” Shenzhen (2012), “Little Movements: Self-practice in Contemporary Art,” OCAT, Shenzhen, MUSEION, Bolzano and Asia Culture Center, Gwangju (2011-2015).