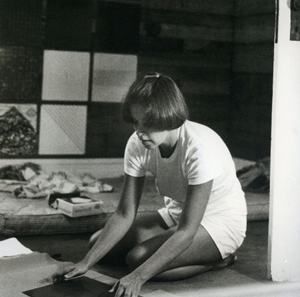 One of the best-known painters of her generation, Bartlett seamlessly combined the refined aesthetic of minimalism with expressive and emotional painting, and leaves a vast and varied body of work.

One of the best-known painters of her generation, Bartlett seamlessly combined the refined aesthetic of minimalism with expressive and emotional painting, and leaves a vast and varied body of work.

Over the course of her career, Bartlett remained dedicated to the investigative and serial approach that was inherent to Rhapsody. Depicting quotidian subjects such as houses, shorelines and domestic interiors, her work resulted in comprehensive examinations of a single motif, both figurative and abstract, and often combined a variety of media in a single work. Through these systematic explorations, Bartlett’s works are imbued with the poignancy and emotion of the day-to-day human experience.

For her series In the Garden (1980), the artist drew the same domesticated plot in southern France from nearly two hundred different perspectives—and she later returned to the subject in a body of paintings. Other major series include: Swimmers and Rafts (1979) which combined steel enamel plates and shaped canvases in singular, multimedia studies; Sea Wall (1985) a group of multipartite paintings of boats along a shoreline with accompanying sailboat sculptures; Air: 24 Hours (1991-1992), a group of twenty-four paintings, one for each hour of the day, and an accompanying print series; and the recent Hospital Paintings (2012) made after snapshots the artists took during a period of extended care along the East River in Manhattan, each emblazoned with the psychologically charged word ‘Hospital’.

After temporarily replacing the steel plates with large-scale, figurative paintings in the 1980s through the early 2000s, Bartlett returned to minimal, gridded arrangements of purely abstract plate works in the 2010s, incorporating larger plates, an increased density, and vibrant color.

In addition to the ambitious bodies of work Bartlett produced for galleries and museums, the artist executed many commissions, spreading her works across specific sites to create immersive environments and durational experiences. The challenge of responding to a specific site was ideal for Bartlett, who thrived on limitations and restrictions, and worked according to a self-imposed methodological rubric. A commission for the lobby and offices of the Institute for Scientific Information in Philadelphia (1980) remains on view at Drexel University, and a ceiling installation for the Homan-ji Buddhist temple in Choshi-shi, Japan, also still on view, inspired a subsequent series of prints on the same theme.

Bartlett was a writer as well as a visual artist, publishing Cleopatra I-IV, a conceptual study of the Egyptian queen across prose, poetry, and diagrams, in 1971, and History of the Universe, a free-form autobiography that intertwines personal anecdotes with cultural references, in 1987.