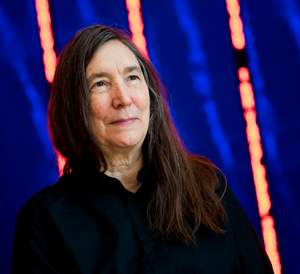 Whitechapel Gallery has announced Jenny Holzer is the tenth artist to receive its prestigious annual Art Icon award. On 19 January 2023, the award will be presented at a gala celebration hosted by Whitechapel Gallery Director Gilane Tawadros, who said:

“We are delighted that Jenny Holzer will be Whitechapel Gallery’s Art Icon in 2023 in recognition of her ground-breaking practice as an artist who has consistently addressed social justice issues with elegance and humour throughout her decades-long career.”

An online auction of artworks donated by leading contemporary artists will also take place, hosted by Phillips Auction House. All funds raised will help support Whitechapel Gallery’s programme, in particular its work with thousands of children and young people each year.

Jenny Holzer (b. 1950) is a conceptual and installation artist whose work deploys text in public spaces across an array of media, including electronic signs, carved stone, paintings, billboards, and prints. Holzer invites public debate and illuminates social and political justice.

Celebrated for her inimitable use of language, Holzer creates a powerful tension between the realms of feeling and knowledge, with a practice that encompasses individual and collective experiences of power, violence, joy, idealism, corruption, vulnerability, and tenderness.

Holzer’s work has appeared in public places and exhibitions around the world, including Tate Modern, the Guggenheim Museums in New York and Bilbao, and the Whitney Museum of American Art. She was the first female artist to represent the United States with a solo exhibition at the Venice Biennale in 1990.

Performing on the night will be founding member of Sonic Youth Thurston Moore, ranked amongst Rolling Stone’s ‘100 Greatest Guitarists of All Time’.

Holzer and Moore first met in the late 1970s in the milieu of New York City’s downtown art and music scene. Moore’s first band, The Coachmen, performed in the now legendary 1979 Manifesto show curated by Holzer.