Impressions of enforced mobility. Eugeen van Mieghem and the Emigrants of the Red Star Line 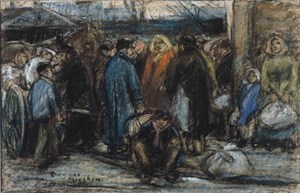 Eugeen Van Mieghem was born at his parent’s inn on the Van Meterenkaai in Antwerp on October 1st 1875. Around 1880 the Van Mieghem family moved slightly further north to Montevideostraat on The Little Island (‘Het Eilandje’), the port area surrounded by the River Scheldt and the docks. The new inn was situated right opposite the building belonging to the Red Star Line, the shipping company that transported emigrants to their new lives in America.

Eugeen Van Mieghem was born at his parent’s inn on the Van Meterenkaai in Antwerp on October 1st 1875. Around 1880 the Van Mieghem family moved slightly further north to Montevideostraat on The Little Island (‘Het Eilandje’), the port area surrounded by the River Scheldt and the docks. The new inn was situated right opposite the building belonging to the Red Star Line, the shipping company that transported emigrants to their new lives in America.

In 1892 Van Mieghem enrolled at the Antwerp academy of art. The exhibitions mounted there by ‘L'Association pour l'Art’ confronted the student with innovative works by Van Gogh, Seurat, Toulouse-Lautrec and the like. In September 1894 Van Mieghem enrolled in Professor Siberdt’s Life Drawing class. That same year Constantin Meunier produced The Exodus, a drawing of a group of emigrants, and in 1896 Eugeen Laermans painted his triptych of emigrants, which was featured on the cover of the ninth The Low Countries yearbook. Both those socially-engaged artists were familiar with Georges Eekhoud’s book La nouvelle Carthage (1888), which described the sad lot of emigrants embarking in Antwerp. In 1896 Van Mieghem was forced to leave the academy after a clash with Professor Siberdt (the very same man who had dismissed Vincent Van Gogh in 1886). His father sent him to the port to look for freight for his shipping agency business. Around 1898 Van Mieghem met his future wife, Augustine Pautre, a Brussels girl studying at the academy in Antwerp. At the end of 1899 he began to frequent the anarchistic organisation ‘De Kapel’. Exhibitions, lectures, discussion and musical evenings were arranged at this centre of progressive intellectual life. Writers (including Stijn Streuvels, Emile Verhaeren, Georges Eekhoud and Camille Lemonnier) and other prominent cultural and political men (including Emile Vandervelde, Edmond Picard, August Vermeylen, Elisée Reclus, Louis Franck, Octave Maus and Frederik van Eeden) lectured to an often disorderly but passionate public on a whole range of subjects relating to topical artistic, philosophical and political events. Visitors came from every stratum of society: bourgeoisie, artists and workers. Not unlike a modern-day adult education centre, this free-thinking and socially progressive organisation championed Flanders’ cultural emancipation.

The new social trends struck a chord with Van Mieghem and he began to form ideals he would never renounce. He wanted to be the artist of the people in the fast-growing world port. Antwerp was rapidly becoming a cosmopolitan city. Even in 1900 more than 10% of the population was of foreign origin.

In March 1901 Van Mieghem showed his work alongside famous French impressionists at the salon of ‘La Libre Esthéthique’ in Brussels. On January 28th 1902 he married Augustine Pautre. The artist’s family lived in the house at the rear of his mother’s inn. Their son was born on November 11th of that year. Eugeen’s work reflected this brief period of domestic bliss.

The world is his oyster

On March 1st 1881 Alexander II, the Russian tsar, who introduced a programme of modernisation and political and economic reforms, was assassinated by anarchists. Shortly afterwards pogroms took place all over the Russian empire, which lead to an exodus of Jews. Though the ‘shetls’ where they lived at one with their own culture and language (Yiddish) provided relative protection, another reason for emigration was the economic downturn in the period 1894-1898. For the growing Jewish proletariat, the New World beckoned like the Promised Land offering freedom of religion and better economic conditions. Between 1882 and the outbreak of the First World War, an estimated one-third of Eastern Europe’s Jews (or almost two million people) emigrated to the United States of America. The main ports of departure were Hamburg, Bremen, Rotterdam, Amsterdam and Antwerp. Jewish emigration peaked in the years 1881-1882 (murder of Alexander II), 1903 (bloodbath in Kishinev) and 1905 (following the uprising in St. Petersburg on Bloody Sunday). Ellis Island Immigration Station was opened in New York on January 1st 1892 to receive the influx of exiles. Between 1892 and 1954 no fewer than twelve million would-be immigrants arrived there.

Antwerp’s Red Star Line was founded in 1872 (partly with American capital) and continued to transport passengers until 1936. In 1893 the shipping company built a stone depot (now a listed building) on the corner of Montevideostraat and Rijnkaai (where their ships berthed). Travellers were examined by the doctor and their clothes disinfected before embarkation. A total of more than 2 million emigrants left Antwerp in search of a new future, so Van Mieghem was confronted by the flood of refugees on a daily basis. His compassion is reflected in an impressive series of drawings of these emigrants in black chalk and pastel. The artist, who avidly read the works of Russian writers, did not need to leave home to see the world. Van Mieghem gave the anonymous, who filed down Montevideostraat past his door, a face in his art.

In dire financial straits Eugeen’s wife Augustine posed naked for her husband and a group of artists in November 1904. A few months later Van Mieghem made drawings of his ailing wife on the back of mourning cards, bills of lading and port telegrams. The young woman died of tuberculosis on March 12th 1905 at the age of just 24. Demoralised and desperate, Van Mieghem did not exhibit any of his work in the period between September 1905 and March 1910. In November 1912, at the age of 37, the artist had his first individual exhibition at the ‘Koninklijk Kunstverbond’ in Antwerp (today the Arenberg theatre). Early 1914 Van Mieghem took part in group salons devoted to Belgian art abroad (in The Hague and Cologne).

The flight during the Great War

The German invasion on August 4th 1914 with World War I lasting four years interrupted growing international interest in Van Mieghem’s work. Antwerp was bombed on October 7th, 8th and 9th 1914. The German army destroyed the fortresses that surrounded the city and carried out bombardments using Zeppelins at night. The civilian population, including the Van Mieghem family, fled the city in panic. As irony would have it, ten years after his sympathetic drawings of Jewish emigrants, the artist himself joined a flood of refugees. Even during the chaos of flight he continued to make drawings, recording the look of fear and dejection on the faces of the citizens like a reporter. Van Mieghem’s mother, who had offered her son financial security, played a central role in his oeuvre of the refugees. Several weeks after Antwerp was taken, the widow (her husband had died in 1899) returned to her livelihood, the café in Montevideostraat. The artist, too, returned to Antwerp and remained in the occupied city throughout the war. In March 1919 he showed his extensive war oeuvre at the Koninklijk Kunstverbond but the liberated people no longer wished to be reminded of wartime suffering and his work did not sell. Art critics, however, justifiably compared him to Steinlen, Forain and Kollwitz. Van Mieghem received several letters of admiration from the writer Georges Eekhoud. Willem Elsschot reviewed his work in the Nieuwe Rotterdamsche Courant. Soon a Dutch gallery at Scheveningen would organise an exhibition of his wartime drawings.

His health undermined by the hardships of war, the disheartened artist was admitted to a sanatorium in Ukkel in April 1919, where he would meet his second wife, Marguerite Struyvelt. In 1920 Van Mieghem obtained a teaching post at the Antwerp academy and his authentic social art gradually made its breakthrough in exhibitions at home and abroad. However, in 1925 health problems and a divorce began to create new problems, culminating in the artist’s withdrawal from public life. On March 24th 1930 at 6 o’clock in the evening Eugeen Karel Van Mieghem died of a cardiac arrest at the Stuivenberg hospital in Antwerp. He was just 54 years old.

In European social art at the turn of the 19th Century many artists admired the work of Jean-François Millet. He endowed simple people working in the fields in the Barbizon region with dignity and respect. Other artists strove to match this social authenticity. They left their own petit bourgeois world to explore the world of labourers: Constantin Meunier and Vincent van Gogh settled in the Borinage, J. Israëls lived among fishermen on the coast, Liebermann and Van de Velde headed for the countryside. As a child of the port, Van Mieghem did not experience their restlessness. Even as a young boy he was fascinated by the colourful hustle and bustle at the dockside. His origins determined his later art. He did not need to go in search of inspiration, for the world was at his doorstep. Driven by his youthful idealism, he left behind a unique and enduring oeuvre about the lives of ordinary people in a cosmopolitan seaport. His works of the emigrants are unique artistic and valuable historical documents supplying evidence of a sympathetic-minded artist observing people compelled to seek their fortunes elsewhere.