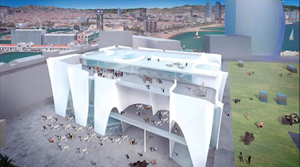 Barcelona may no longer have its Hermitage museum. The company in charge of the project, Hermitage Museum Barcelona – mostly owned by a Swiss-Luxembourgian investment fund called Varia – has dropped its plans after facing several years of opposition by the local council, led by left-wing, anti-austerity Ada Colau.

Barcelona will not have its Hermitage museum – at least in the short, mid-term.

The company in charge of the project, Hermitage Museum Barcelona – mostly owned by a Swiss-Luxembourgian investment fund called Varia –, has dropped its plans after facing several years of opposition by the local council, led by left-wing, anti-austerity Ada Colau.

The entity is no longer spending more money on developing the project, as first published by 'El País' newspaper and confirmed by the Catalan News Agency (ACN). Instead, Hermitage is focusing on legal disputes against the Barcelona local government.

The challenge opened in court revolves around the council's decision to reject signing a contract that would have allowed the construction of the museum.

The premises where Hermitage was planned are owned by Barcelona's port – a facility run by the Spanish government –, which in May 2021 allowed the works, as long as a contract including the local council was signed. Two days later, the institution led by Colau declined getting involved.

While rejecting the project – keeping the stance taken for years –, deputy mayor Janet Sanz suggested that they could rethink their position if local entities were also involved in the project.

Barcelona's iconic Liceu opera hall had launched talks with Hermitage to create an alliance allowing them both to also use the potential museum as a cultural hub, which was welcomed by the local government.

Yet, earlier this month, it was revealed that Liceu might go solo and open a second site, 'Liceu Mar', devoted to contemporary and experimental compositions along the Catalan capital's seafront.

The institution, which has been on the city's La Rambla boulevard since its inauguration in 1847, is weighing up whether to make use of the location that housed the Imax Port Vell, a 3D cinema, from 1995 to 2014, following talks with the council and the Port of Barcelona, as was first reported by Ara newspaper and confirmed by the Catalan News Agency. This building is on the Moll d'Espanya quay, close to the Aquarium and the Maremagnum mall, in the Port Vell harbor.

Colau's executive is in favor of this project: "Time has proved we were right, it was worth working and waiting for a project that had more consensus," said Janet Sanz on Friday.

For her, a project launched by a local entity, rather than a foreign one, is positive – she also believes Hermitage has no chances to succeed in its legal challenge.

Meanwhile, the Socialists, the local government's junior party, is not opposing the Hermitage plans and is not giving up.