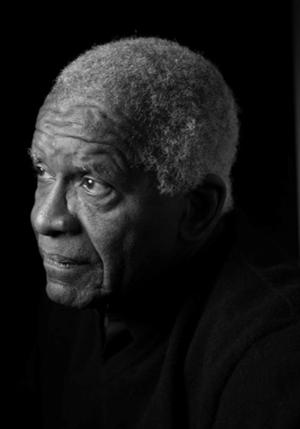 Artist Throughout his career, Hunt was central to important landmarks in African American art history and Civil Rights-era action.

The Getty Research Institute has acquired the archive of sculptor Richard Hunt. Hunt’s work often ties together historical and contemporary references all the while creating historically-based artwork that conflates local and African diasporic themes and design elements. His unique approach to the conception and construction of sophisticated forms calls upon aspects of storytelling and memory with objects that emphasize fluidity, movement, migration, and change.

“Hunt’s creative and seemingly spiritual connection to his African American heritage situates him as an inheritor of the African creative traditions that influenced modernism and its best-known European artists,” says Mary Miller, director of the Getty Research Institute. “Both sculptor and print maker, Hunt’s collection of models, maquettes, sculptural objects, sketchbooks, related works on paper, studio notebooks, and photographs relate closely to the GRI’s core collections sectors and areas of curatorial expertise, both in terms of subject matter and media.”

“Richard Hunt is one of the foremost American artists of the mid- to late-twentieth century,” says LeRonn Brooks, associate curator for modern and contemporary collections. “In addition to the extensive archival material pertaining to Hunt’s over 60-year career, a great deal of this archive consists of material highlighting his significance as a public figure and his eminent role in the African American community as well as correspondence with government leaders, clients, other prominent artists and African American leaders of his time including John H. Johnson of the Johnson Publishing Company. In all, the Richard Hunt archive represents a significant and substantial addition to the emerging collections related to the African American Art History Initiative (AAAHI) and the study of African American art during the twentieth century.”

In addition to his acclaimed career as a fine art sculptor, Hunt is one of the most prolific and significant creators of public art in the U.S, with 160 public sculpture commissions gracing prominent locations in 24 states. Hunt has sculpted monuments for notable figures, including Martin Luther King, Jr., Mary McLeod Bethune, Carl Sandburg, and Hobart Taylor, Jr., and has recently completed a major monument for Ida B. Wells.

"I am thrilled that the Getty, who I first became affiliated with through my participation in the Getty Center for Education in the Arts during the 1980s, will be the home of my archive,” says Richard Hunt. “The entirety of my papers, photographs, letters and sketches trace the arc of my career and my contribution to art history. I hope that my archive would serve not only as a remembrance but an inspiration to others."

The archive, estimated at approximately 800 linear feet, contains detailed notes and correspondence, notebooks, sketchbooks, photographic documentation, financial records, research, ephemera, blueprints, posters, drawings, and lithographs, as well as a selection of wax models for public sculptures. At the heart of the archive are Hunt’s project files which contain complete records on every commission, project, exhibition, and body of work that Hunt has produced. Hundreds of sketches and drawings capture Hunt’s thought processes as ideas develop, and technical drawings, blueprints, and correspondence note the complex logistics of fabrication, of obtaining necessary city approvals, and of integrating public artworks into architectural spaces designed to serve many different communities and publics. Many of Hunt’s sculptures have been carefully photographed and his files document their placement in public and private collections throughout the United States and abroad.

The archive also documents Hunt’s lectures, and his service on many prestigious councils and juries, including the jury for the Vietnam Veterans Memorial. The archive includes a small number of audiovisual materials, including documentation of Hunt’s projects and recordings from a classical music series that Hunt held at his studio from the late 1970s through the 1990s. Though the archive primarily focuses on Hunt’s professional career, there are several boxes of personal and family archival collections, including photo albums and correspondence.
In addition to his sculptural practice, Hunt has maintained a parallel practice as a printmaker, most often producing lithographs. The archive includes more than one hundred prints, as well as a selection of larger drawings and sketches.

About Richard Hunt
Hunt was born in Chicago, IL in 1935. In 1950, he set up a studio in his bedroom and began to model in clay. In addition to formal art instruction, in 1953 he taught himself to solder, and in 1955 he taught himself to master the welded-metal technique. After graduating from the School of the Art Institute in Chicago, Hunt was awarded the prestigious Logan, Palmer, and Campana prizes, and the James N. Raymond Foreign Traveling Fellowship in 1957, which permitted him to visit England, France, Spain, and Italy. Hunt was a Guggenheim Fellow in 1962, a Cassandra Foundation Fellow in 1970, and a Tamarind Fellow (awarded under the auspices of the Ford Foundation) in 1965. He has served as Visiting Artist and Professor at many schools and universities, including Harvard, Howard, and Yale Universities.

Over the course of his career Hunt has had more than 150 solo exhibitions and his work is represented in more than 100 public museums throughout the US and abroad, including the Art Institute of Chicago, the National Gallery and National Museum of American Art in Washington, DC, the Whitney Museum of American Art, the Metropolitan Museum of Art and the Museum of Modern Art in New York. He has received many fellowships, prizes and awards and holds sixteen honorary degrees from American universities. In 2009, Hunt was awarded the Lifetime Achievement Award by the International Sculpture Center.