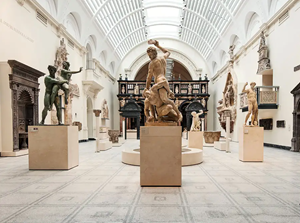 Three new trustees have been appointed to The Victoria and Albert (V&A) Museum by Prime Minister Boris Johnson. Their posts will last four years, commencing 5 September.

Three new trustees have been appointed to The Victoria and Albert (V&A) Museum by Prime Minister Boris Johnson. Their posts will last four years, commencing 5 September.

ROSALIND BLAKESLEY is a Professor of Russian and European Art at the University of Cambridge, where she is a Fellow of Pembroke College and co-founder of the Cambridge Courtauld Russian Art Centre.

RUSTY ELVIDGE is a former collector of antique silver and jewellery, Regency furniture and English watercolours and now collects paintings by the Bloomsbury set, modern British artists and contemporary art and pottery.

With a career in finance, Elvidge has worked as Vice President of Salomon Brothers and is now Managing Director at Credit Suisse.

ZEWDITU GEBREYOHANES is a right-wing commentator, Executive Editor of History Reclaimed and Director of Restore Trust, a forum campaigning against perceived “wokeness” within the National Trust.

She previously worked as Head of the History Matters Unit at right-leaning thinktank Policy Exchange, where she accused institutions of pursuing a “post-BLM trend” to “take action in relation to the public representation of history on a whim”.

Also a former canvasser for the Conservative party, Gebreyohanes' appointment has been criticised by Labour.

Barbara Keeley, Shadow Minister for the Arts and Civil Society, told The Guardian: “Public appointments should be based on merit, not how much you’ve donated to the Conservatives or whether you work at one of their think tanks. The constant stream of cronyism in public appointments without any public scrutiny or accountability threatens to damage the reputation of many of our great British institutions.”