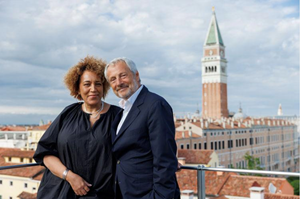 The President of La Biennale di Venezia, Roberto Cicutto, and the Curator of the 18th International Architecture Exhibition, Lesley Lokko - appointed as the Artistic Director of the Architecture Department by the Board of Directors announced the title and theme of the Biennale Architettura 2023, which will be held from May 20th to November 26th 2023.

The President of La Biennale di Venezia, Roberto Cicutto, and the Curator of the 18th International Architecture Exhibition, Lesley Lokko - appointed as the Artistic Director of the Architecture Department by the Board of Directors announced the title and theme of the Biennale Architettura 2023, which will be held from May 20th to November 26th 2023 (pre-opening May 18th and 19th) in the Giardini, at the Arsenale, and at various sites around Venice.

The title of the 18th International Architecture Exhibition is The Laboratory of the Future.

“New technologies continuously appear and disappear – stated Lesley Lokko - giving us unfiltered glimpses of life in parts of the globe we will likely never visit, much less understand. But to see both near and far simultaneously is also, as Du Bois and Fanon famously put it, a form of ‘double consciousness’, the internal conflict of all subordinated or colonised groups, which describes the majority of the world, not only ‘there’, in the so-called Developing-, Third-, and Arab Worlds, but ‘here’ too, in the metropoles and landscapes of the global North. In Europe we speak of minorities and diversity, but the truth is that the West’s minorities are the global majority’diversity is our norm. There is one place on this planet where all these questions of equity, race, hope and fear converge and coalesce. Africa. At an anthropological level, we are all African. And what happens in Africa happens to us all”.

Explaining her choice Lesley Lokko said that the title operates on several levels:

“Firstly, Africa is the laboratory of the future. We are the world’s youngest continent, with an average age half that of Europe and the United States, and a decade younger than Asia. We are the world’s fastest urbanising continent, growing at a rate of almost 4% per year. This rapid and largely unplanned growth is generally at the expense of local environment and ecosystems, which put us at the coal face of climate change at both a regional and planetary level. We remain the most under-vaccinated continent at just 15%, yet recorded the fewest deaths and infections by a significant margin that the scientific community still can’t quite explain So often on the wrong side of hope and history, the resilience, self-reliance and a long, long history of grass-roots community health care suddenly tipped the balance in our favour. The long and traumatic history of forced migration through the trans-Atlantic slave trade is ground on which successive struggles for civil rights and a more civil society are being fought all over the world today. In all the talk of decarbonisation, it is easy to forget that black bodies were the first units of labour to fuel European imperial expansion that shaped the modern world. Racial equity and climate justice are two sides of the same coin.

But hope is a powerful currency. To be hopeful is to be human. At a deeply personal level, I owe my presence at this table today to the tireless demands for a more just, more inclusive and more equitable fought for by generations before me. The vision of a modern, diverse, and inclusive society is seductive and persuasive, but as long as it remains an image, it is a mirage. Something more than representation is needed, and architects historically are key players in translating images into reality.

Secondly, La Biennale di Venezia itself is also a kind of laboratory of the future, a time and space in which speculations about the discipline’s relevance to this world — and the world to come — take place. Today, the word ‘laboratory’ is more generally associated with scientific experimentation and conjures up images of a specific kind of room or building. But Richard Sennett’s examination of the word ‘workshop’, from which the word ‘laboratory’ stems, deepens the concept of collaborative endeavours in a different way. In the ancient world, in both China and Greece, the workshop was the most important institution anchoring civic life. In the aftermath of the American civil war, Booker T Washington, an ex-slave, conceived a project in which freed slaves recovering from slavery would leave home, train at two model institutions, the Hampton and Tuskegee Institutes, and return to their home communities. Importantly, during this temporary relocation, cooperation would be forged by direct experience and daily contact with one another as equals. We envisage our exhibition as a kind of workshop, a laboratory where architects and practitioners across an expanded field of creative disciplines draw out examples from their contemporary practices that chart a path for the audience — participants and visitors alike — to weave through, imagining for themselves what the future can hold”.

“The world has always been rife with cultural misunderstandings: up until the beginning of the twentieth century, Europe viewed African art as barbaric and incomprehensible, and it took the provocations of the artistic avantgardes to force Europeans to look at a Bantù mask through a different lens; only cultured elites knew what the statues of Easter Island were: common people in Europe, and perhaps in China, judged the erotic sculptures on Indian temples, when they happened to see photographs of them, to be lewd and frenzied: Christians were scandalised when the followers of other religions represented their divinities in animal form, forgetting that western Christianity for centuries represented the third person of the Holy Trinity in the form of a dove.” (Excerpt from Lectio Magistralis by Umberto Eco to the Ministers of Culture at the inauguration of the Expo di Milano in 2015)

“I quote these words today because I believe that the 18th International Architecture Exhibition curated by Lesley Lokko will have much to say about these themes as well. A sort of update seven years after that event. Lesley shows determination and courage in using two words in her title that are time-worn but irreplaceable – “laboratory and future” – to restore the full importance of their meaning.

You will understand how her approach looks very much like the proposal for a pact between the visitors of La Biennale, the world of architecture and of culture in general.  This is an Exhibition that, based on very practical premises and very specific points of view, will look straight into the eyes of the representatives of participating Countries, and all those who will crowd the Giardini, the Arsenale and the City of Venice. All in order to speak to the world, which is the real reason why a Curator takes on the responsibility of organizing an International Exhibition of La Biennale.”

The 18th International Architecture Exhibition will also feature, as usual, the National Participations, with each country presenting its own exhibition in the Pavilions of the Giardini and the Arsenale, and in the historic centre of Venice. This edition will once again include a selection of Collateral Events organized by international institutions, which will hold their own shows and initiatives in Venice.