About 7,000 Works of Andrew Wyeth to Become Accessible through Remarkable Partnership 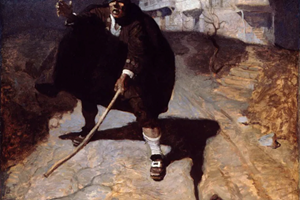 The Wyeth Foundation for American Art has announced that it has established a collections-sharing arrangement managed by the Brandywine River Museum of Art, an approach that will ensure Andrew and Betsy Wyeth’s extensive collection of works by the artist is available to the public.

The Wyeth Foundation for American Art has announced that it has established a collections-sharing arrangement managed by the Brandywine River Museum of Art, an approach that will ensure Andrew and Betsy Wyeth’s extensive collection of works by the artist is available to the public.

The Foundation’s collection—assembled primarily by Betsy, who was Andrew Wyeth’s muse and who also carefully documented his career—is deeply personal and gives significant insight into Wyeth’s artistic and career trajectory. It comprises nearly 7,000 works from across Wyeth’s seven decades as a working artist, with rarely seen paintings, watercolors, sketches and sketchbooks. The Brandywine will oversee the collection and—with a new curatorial position at the Museum funded by the Wyeth Foundation to supervise the collection—conduct research, develop exhibitions and make works available for loan to other institutions. The Wyeth Foundation collection will be located jointly at Brandywine and the Farnsworth Art Museum and rotating presentation of works will be on view in both museums’ galleries throughout the year.

Based in Chadds Ford, Pennsylvania, the Brandywine focuses on American art and has had longstanding relationships with the Wyeth family. The museum has generated some of the most well-received exhibitions and scholarship on three generations of Wyeth family artists. In 2017, the Brandywine’s Andrew Wyeth: In Retrospect exhibition presented more than 100 of the artist’s most important paintings and works on paper, along with a catalogue publishing new perspectives on his work and career.

The Farnsworth, in Rockland, Maine, is also recognized for its connections to the Wyeth family, who spent summers living and working in Maine. Its recent exhibition Andrew Wyeth: Maine Legacy highlighted the artist’s connections to the area. In both Pennsylvania and Maine, the Wyeths were engaged by the landscapes and the people living there, finding inspiration for works that at once capture the majesty of nature and the everyday lives of the artists and their subjects.

“We are so excited to formalize a partnership with the Brandywine River Museum of Art and the Farnsworth Art Museum to ensure that Andrew and Betsy Wyeth’s collection is well-maintained and available for the public to enjoy,” said J. Robinson West, the President of the Wyeth Foundation for American Art’s Board of Trustees. “The Wyeth family is closely connected to both Chadds Ford and coastal Maine, with long relationships with both of these institutions. This collections management arrangement draws on the expertise of these two great museums in managing works of art, while underscoring the mission of the Foundation to support scholarship and exhibitions of Wyeth’s work, now and into the future, both at these two museums and around the world.”

The Foundation also announced today that it has given an outright gift to the Brandywine River Museum of Art of close to 200 pieces of art formerly in the collection of Andrew and Betsy Wyeth. Highlights of the gift include over 40 works by N. C. Wyeth, whose letters were published by Betsy Wyeth in 1970, leading to a major reconsideration of his career. Also included are more than 30 works by Howard Pyle, as well as paintings and drawings by Daniel Garber, Carolyn Wyeth, Henriette Wyeth Hurd, Peter Hurd, John McCoy, George A. “Frolic” Weymouth and others. This gift further strengthens the Brandywine’s deep holdings of works by N. C. Wyeth, Andrew Wyeth, Henriette and Carolyn Wyeth, and Jamie Wyeth—all of whom resided nearby. The Brandywine also owns and operates N. C. Wyeth’s House and Studio, Andrew Wyeth’s Studio and the Kuerner Farm, ensuring that all three National Historic Landmarks are maintained and open to the public.

“We are thrilled by this generous and transformative gift that will greatly enhance Brandywine’s already extensive assemblage of landscape painting and American illustration, giving the Museum the largest collection of art by N. C. Wyeth and very significant holdings of work by Howard Pyle,” said Thomas Padon, the James H. Duff Director of the Brandywine River Museum of Art. This follows an historic gift to the Farnsworth of 26 works by three generations of Wyeth family artists from Betsy Wyeth’s collection made through the Wyeth Foundation in summer 2021.

The Collection of the Wyeth Foundation for American Art
The Foundation’s collection is both broad and deep—and the majority of the works have never been exhibited publicly. Among the unusual elements are 70 of Wyeth’s oil paintings—very rare works, principally from the 1930s, when he experimented with the medium before adopting tempera and watercolor as his preferred mediums. These paintings—such as Fox Grass Below Adams (1934), currently on view at the Brandywine—reflect prevalent themes, yet their style and approach demonstrate his evolution as an artist over his entire career. Wyeth is best known for his tempera paintings, 48 of which are in the collection, including his 1966 tribute to his wife Betsy, titled Maga’s Daughter; Black Hunter (1938), an rare example of an early tempera; and Wyeth’s last major painting, Goodbye (2008), which has rarely been seen publicly. The collection features over 2,000 of Wyeth’s watercolors, for which he is renown—many rendered using the “dry brush” technique.

The largest part of the collection are the more than 4,000 drawings: some are finished drawings some are preparatory drawings and sketches, and some are study pieces for works he would later paint in tempera or watercolor, and many are still in their original sketchbooks. From the fully rendered work in pencil, My Sister (1967), to a casual portrait of his father, Pa Writing at his Desk (1942), to tempera studies for major paintings such as That Gentleman Study (1961) these drawings will provide a vast trove of information that reveal Wyeth’s thought process and experimentation with how to stage or represent different scenes.

As part of the collections-sharing arrangement, the Foundation will provide funds for a new curatorial position managed by the Brandywine River Museum of Art with oversight of Wyeth gallery displays at both Brandywine and the Farnsworth as well as creating exhibitions that will travel across the country. The curator will foster research and scholarship on Andrew Wyeth including finalizing and publishing a catalogue raisonné of the artist’s tempera paintings and partner with Brandywine’s education staff to organize public programs. Accessibility to the collection by curators, scholars, and students is a primary aim of the collaboration with the Wyeth Foundation. The search for this new position is expected to begin immediately.

“Andrew Wyeth is truly an iconic artist. In a career spanning over seven decades he developed a singular style, creating some of the most haunting compositions in American art,” added Thomas Padon. “Focusing on the landscapes, people and objects he knew in Chadds Ford and in Maine, where he summered throughout his life, his art is as personal as it is timeless. Through her tireless documentation of her husband’s work throughout his career, her gift of the Andrew Wyeth Studio to the Brandywine, and all the planning she put into making her collection accessible through this partnership with the Wyeth Foundation, Betsy Wyeth ensured that her husband’s remarkable artistic legacy will always be accessible to the public. I am profoundly grateful for her generosity and her important contribution to the study of American art. We are excited to build on our longstanding relationship with the Wyeth family and the Wyeth Foundation for American Art with this new partnership.”