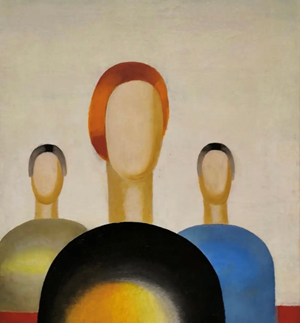 The 'Three Figures' painting by Anna Leporskaya was defaced at the Yeltsin Centre, located in the city of Yekaterinburg in the Sverdlovsk Oblast region in west-central Russia on 7 December 2021, by a 'bored' 60-year-old security guard.

On his first day at work, a 'bored' security guard decided to draw eyes on a valuable modern art painting worth a whopping $1 million (£740,000).

The 'Three Figures' painting by Anna Leporskaya was defaced at the Yeltsin Centre, located in the city of Yekaterinburg in the Sverdlovsk Oblast region in west-central Russia on 7 December 2021.

The 'bored' 60-year-old security guard allegedly drew eyes with a ballpoint pen on the faces of two of the three figures in the painting during an exhibition called 'The World as Non-Objectivity. The Birth of a New Art'.

The unnamed guard was reportedly from a private security company and has since been fired.

Leporskaya, who was a student of Russian avant-garde artist Kazimir Malevich, is having their 'Three Figures' painting (1932-1934) worked on by experts in a bid to restore it to its former glory. Leporskaya, who died in 1982, is known primarily as a master of artistic porcelain. In addition to the Tretyakov Gallery, her works are widely represented in the collection of the Russian Museum.

After the incident, police opened an investigation for vandalism, which comes with a RUB-40,000 (GBP£395) fine and a one-year correctional labour sentence.

The damage to the painting has been estimated at RUB 250,000 (GBP 2,470). It is unclear how much the painting is worth, but it was insured with the Alfa insurance company for RUB 74.9 million (GBP 740,000). It has been reported that the company is paying for the restoration.

The Yeltsin Center said in a statement released on Tuesday: "We inform you that during the investigation, the person who painted the eyes on the figures in the painting by Anna Leporskaya was identified - this is an employee of a private security organization that carries out security activities of the Yeltsin Center.

"Recall that on December 7, 2021, during the demonstration of the exhibition 'The World as Non-Objectiveness. The Birth of a New Art' in the Art Gallery of the Yeltsin Center suffered a painting by Anna Leporskaya 'Three Figures' (1932–1934) from the collection of the State Tretyakov Gallery.

"The damage was done with a ballpoint pen.'

The Center added: "The work was inspected by the restorer of the State Tretyakov Gallery the very next day and sent to Moscow. The painting is being restored, the damage, according to the expert, can be eliminated without consequences for the work of art.

"The Yeltsin Center refrained from commenting on this situation in hot pursuit, as an internal investigation of the incident and interaction with law enforcement agencies were underway.'