MARGARET AND CHRISTINE WERTHEIM VALUE AND TRANSFORMATION OF CORALS

Working hours:
Tue-Sun, 10am - 6pm Closed on Mondays except on public holidays. 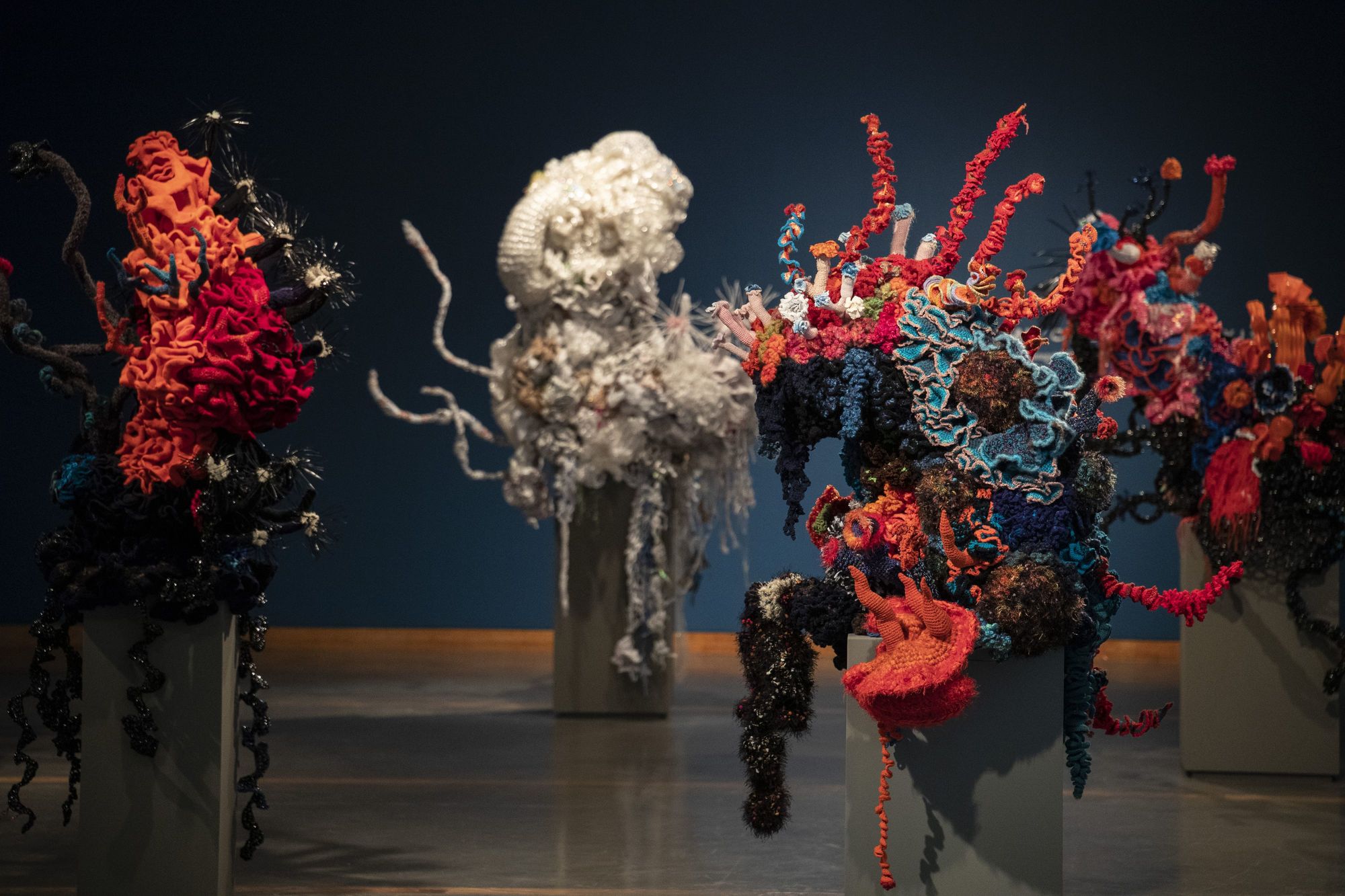 The cnidarians are dying. Corals everywhere are being killed by global warming. Refusing to capitulate in the face of loss, Australian-born, California-based sister-artists Margaret and Christine Wertheim have fabulated a response using traditional handicraft techniques: their crochet reefs shimmer and swell in colors and shapes inspired by the Great Barrier Reef.

Like the living reefs they emulate, the sisters have created a collaborative installation to which over 20,000 people in 50 cities and countries have contributed. Art, science, mathematics and community practice are synthesized in work that reflects the possibilities of stitchery and the hidden history of using craft techniques for scientific representation.

Exhibited at the 2019 Venice Biennale, the sisters’ Crochet Coral Reef is now the subject of a museum-wide retrospective at Museum Frieder Burda. On the ground floor are a series of works they began in 2005, into which are incorporated crochet pieces from a group of skilled craft collaborators. Here we encounter a grove of giant Coral Forests (made from yarns, videotape, tinsel and other detritus), a Bleached Reef, an all-plastic Toxic Reef, a collection of miniature coral Pod Worlds, and new sculptures for this exhibition, including a large-scale embroidered sampler paying homage to the projects’ contributors and domestic female labor.

Alongside reefs made by the Wertheims, the project also includes Satellite Reefs generated by citizens of many countries. For Museum Frieder Burda, a new Baden-Baden Satellite Reeftransforms the upper floor into a kaleidoscopic underwater world. With more than 40,000 coral pieces made by 4,000 participants from Germany and beyond, this is by far the largest Satellite Reef. Throughout Germany, people gathered to crochet and draw attention to the crisis unfolding in the world’s oceans. At the Museum, with guidance from Margaret and Christine, a dedicated team transformed this wooly outpouring into a collection of three-dimensional coral islands and vast wall-mounted sculptures.

Underlying the project is also a mathematical dimension, for many of the ruffling shapes found in both marine organisms and their crocheted siblings are based on hyperbolic geometry, an alternative to the Euclidean variety we typically learn. The Crochet Coral Reef may thus be seen as an exercise in applied mathematics melding handicraft with geometrical exploration.

At the same time, the project demonstrates parallels between biological and social evolution. For in the process of crocheting corals, each maker becomes part of a comprehensive whole, analogous to the individual polyps of living reefs that together grow collective forms blurring the boundaries between the ‘individual’ and the ‘communal.’ Collaborative, figurative, material, conceptual, artistic, scientific, feminist and playful, the Crochet Coral Reef alerts us to the reality that life on Earth is nothing if not entangled.