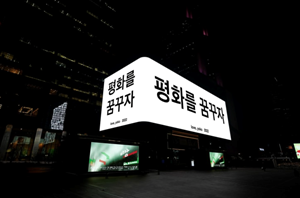 Artist, musician and activist Yoko Ono is occupying digital mega screens across the world to transmit a message of peace. Some of the largest LED billboards in major metropolitan areas will be interrupted daily to broadcast the phrase "Imagine Peace" in bold black text every night for the rest of March.

Artist, musician and activist Yoko Ono is occupying digital mega screens across the world to transmit a message of peace. Some of the largest LED billboards in major metropolitan areas -- including Piccadilly Lights in London, Times Square in New York and K-Pop Square in Seoul -- will be interrupted at 8:22 p.m. local time to broadcast the phrase "Imagine Peace" in bold black text every night for the rest of March. The other cities include Berlin, Los Angeles, Melbourne and Milan, with each phrase translated locally. Ono's first message lit up city streets on Thursday night. The public art installation is presented by Circa, a platform that utilizes digital billboards for arts programming, as well as London's Serpentine Galleries.

Ono's message of peace comes at a time when Russia continues its invasion of Ukraine. At time of writing, more than one million refugees have fled Ukraine as the war begins its second week with intensified missile strikes in the country's most populated cities. In response, the US, UK and EU have levied economic sanctions on Russia while in the arts, musicians, artists and institutions have canceled concerts, exhibitions and performances in Russia as a kind of cultural sanction.

"Imagine Peace" is Ono's ongoing art project that has appeared at a number of locations, from the Las Vegas strip to Hyde Park in London.

The series first began in March 1969 when Ono and her late husband, musician John Lennon, protested the Vietnam War from their honeymoon suite at the Amsterdam Hilton Hotel. The couple lay surrounded by flowers and homemade placards that read "Hair Peace" and "Bed Peace." The photos from their "Bed-In" captured the countercultural spirit of the beat generation and have since been exhibited in the Museum of Modern Art.

At the second "Bed-In" protest, staged at the Queen Elizabeth Hotel in Montreal over seven days, Lennon and Ono's conceptual Plastic Ono Band recorded the song "Give Peace a Chance," which was broadcast on 160 European radio stations simultaneously on Friday in support of Ukraine. Two years after the Montreal protest, in 1971, Lennon penned the seminal track "Imagine."

Almost four decades later, in 2007, Ono installed an "Imagine Peace" tower of light on Viðey Island off the coast of Reykjavík, Iceland, to commemorate Lennon.

Now, the prolific message will return once again -- this time on a global stage. Accompanying the public art piece is a limited-edition print, with all of the proceeds donated to the United Nations Central Emergency Response Fund (UN CERF), an organization providing food, water, medicine and shelter to countries in crisis. The UN CERF is currently reviewing a $20 million allocation of funds to support the people of Ukraine, according to its website.

Ono's timeless message has been the bedrock of her artistic work. "Imagining is something that we can all do, even when we have different opinions about how to get there," she said in a press statement.