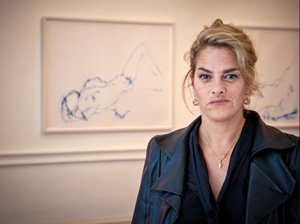 Whitechapel Gallery has announced Tracey Emin (b. 1963, UK) to be the 9th artist to receive the prestigious annual Art Icon award. On Tuesday 22 March 2022, the award will be presented at gala celebration hosted by Iwona Blazwick OBE (Director, Whitechapel Gallery).

Whitechapel Gallery has announced Tracey Emin (b. 1963, UK) to be the 9th artist to receive the prestigious annual Art Icon award. On Tuesday 22 March 2022, the award will be presented at gala celebration hosted by Iwona Blazwick OBE (Director, Whitechapel Gallery).

Iwona Blazwick said: “Our nominating committee was unanimous in wishing to pay tribute to Tracey Emin. Over the past four decades, her work across painting, sculpture, installation, film and photography has both challenged and transformed conceptions of art, gender, health and autonomy; now as one of the most renowned artists of our time, Emin’s impact can be seen globally – from contributing to the development of East London and Margate as centres for creativity, to her impact as a Professor at the Royal Academy and efforts further afield with the Tracey Emin Library in Uganda. Her pioneering portrayals of love, loss, happiness and hope will resonate with artists and audiences for years to come.”

An online auction of artworks donated by leading contemporary artists will also take place, hosted by Phillips. All funds raised will help support Whitechapel Gallery’s programme, in particular its work with thousands of children and young people each year.

Tracey Emin’s expressive and visceral work is renowned for its portrayal of personal experience and heightened states of emotion. Frank and intimate, but universal in its relevance, her practice draws on the fundamental themes of desire and grief, unravelling the constructs of ‘woman’ and ‘self’ through painting, drawing, film, photography, sewn appliqué, sculpture and neon.

In 1998 she produced My Bed, perhaps her most iconic work. A representation of her own bed after a particularly troubled period, it offers an unflinching glimpse into a state of emotional flux through its unedited, real-life accumulation of objects. Her work from this period also includes the photographic series, Naked Photos – Life Model Goes Mad (1996), which is to be displayed in A Century of the Artist’s Studio: 1920-2020, opening on 24 February 2022 at Whitechapel Gallery. Accompanied by more than 80 artists in the exhibition, the work records a painting performance Emin gave in Galleri Andreas Brändström, Stockholm. Taking on the role of both artist and life model, who is often nude, the artist was viewed by visitors through small peepholes as she worked in a specially-constructed studio space in a candid and politically charged public performance.

By contrast, Emin’s ongoing series of neons – a critical part of her practice since the 1990s – adopt a language more commonly associated with commercial signage. Formed of her own handwriting, the texts are at once poetic and intentionally ambiguous.

Emin has described her practice as being about ‘rites of passage, of time and age, and the simple realisation that we are always alone’. In recent years, painting and bronze sculpture have become her primary focus in works where the body as a battle ground comes to the fore. On the canvas she confronts moments of anguish, elation or pain: from memories of sexual aggression to the loss of her mother and episodes of insomnia, illustrated through powerful graphic lines and dripping gestures. The tactile, near-abstract female forms of her sculptures are similarly eroticised and defenseless, but always subjective, relating back to the artist’s own body and physical self. The Mother (2022), a monumental 9-metre bronze sculpture and Emin’s largest work to date emphasises the female figure as vulnerable, but also as protector and sexualised being – a heroic monument to femininity and motherhood. In June 2022 the sculpture is to be permanently installed outside of the Munch Museum in Oslo, Norway.

Most recently, Emin revealed that will establish an art school and museum in her seaside hometown of Margate, transforming a former Victorian bathhouse and mortuary into dozens of artists’ studios and a miniature Emin museum. The Tracey Emin Foundation will further provide a sculpture park, artist residencies, lectures and, crucially, a life-drawing club for local children.

– For over a century the Whitechapel Gallery has premiered world-class artists from modern masters such as Pablo Picasso, Jackson Pollock, Mark Rothko, Frida Kahlo and Hannah Höch to contemporaries such as Zarina Bhimji, Sophie Calle, William Kentridge and Michael Rakowitz. Its historic campus houses exhibitions, artist commissions, collection displays, historic archives, education resources, inspiring art courses, talks and film screenings, the Townsend dining room and the Koenig Bookshop. It is a touchstone for contemporary art internationally, plays a central role in London’s cultural landscape and is pivotal to the continued growth of the world’s most vibrant contemporary art quarter. The Gallery believes that art has the power to transform the lives of children and young people, and pioneered gallery education and community outreach. Working with thousands of children and young people annually, leading artists collaborate with those who have the greatest need for opportunity, and their art is celebrated through exhibitions in galleries 5&6, which are dedicated to education www.whitechapelgallery.org/learn

– The Whitechapel Gallery Art Icon Award was established in 2014 in partnership with Swarovski and the Swarovski Foundation. The collaboration has fostered innovation and generated valuable support for the Gallery’s community and educational initiatives for more than a decade.

– A Century of the Artist’s Studio: 1920-2020 runs from 24 February – 5 June 2022. The exhibition presents a 100-year survey of the studio through the work of artists and image-makers from around the world, bringing together more than 100 works by over 80 artists and collectives from Africa, Australasia, South Asia, China, Europe, Japan, the Middle East, North and South America. The idea for the exhibition originated from a proposal by art historians Giles Waterfield (1949-2016) and Dawn Ades. Led by Iwona Blazwick OBE, the research and themes of the exhibition have been developed over the past three years by a curatorial committee made up of Dawn Ades, Inês Costa, Richard Dyer, Hammad Nasar and Candy Stobbs.