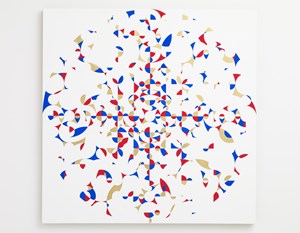 Gabriel Orozco is unarguably one of the most important and prolific contemporary Mexican artists of the last two decades. Besides this, he could also be defined as a nomad artist and, why not, as a nice human with the ability to talk about his work in a very amiable way. He is a traveller by nature and it is probably this, combined with his Mexican roots, what makes his work genuine and authentic. Orozco’s series of works can be understood as an expression of his vital experiences and as the materialisation of what he learns from people and places he meets on the way. He lets himself to be inspired by the environment surrounding him, with an honest interest that is then captured in his oeuvre.

Gabriel Orozco is unarguably one of the most important and prolific contemporary Mexican artists of the last two decades. Besides this, he could also be defined as a nomad artist and, why not, as a nice human with the ability to talk about his work in a very amiable way.

He is a traveller by nature and it is probably this, combined with his Mexican roots, what makes his work genuine and authentic. Orozco’s series of works can be understood as an expression of his vital experiences and as the materialisation of what he learns from people and places he meets on the way. He lets himself to be inspired by the environment surrounding him, with an honest interest that is then captured in his oeuvre.

Although he lives between Paris, New York and Mexico City, he took up residence in Japan since January 2015, where he has created part of the new works that are currently exhibited in Marian Goodman Gallery. This is Orozco’s first show in London since the 2011 retrospective at Tate Modern. 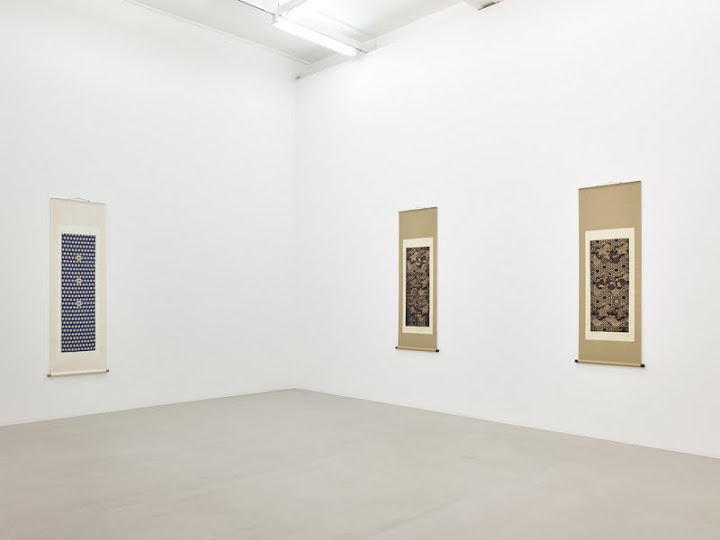 Among his new pieces, he has created a series of silk collages on Japanese traditional scrolls, which have been displayed both on the walls and in their own wooden boxes.

To create this new body of work he has learned the traditional methodology of creating and mounting the scrolls, thanks to the craftsman and antiquarian book restorer Tatsuo Ooiri. His nomadic background can be reflected in the admiration he shows when learning and assimilating the local culture. He has considered, not only the traditional technique of mounting scrolls, but the advice of Tatsuo Ooiri when deciding the display order (the position of the pieces in relation to the window is extremely important by Japanese people) and he has even created stamps with his name, the traditional way of signing in Japan even for bank transactions. 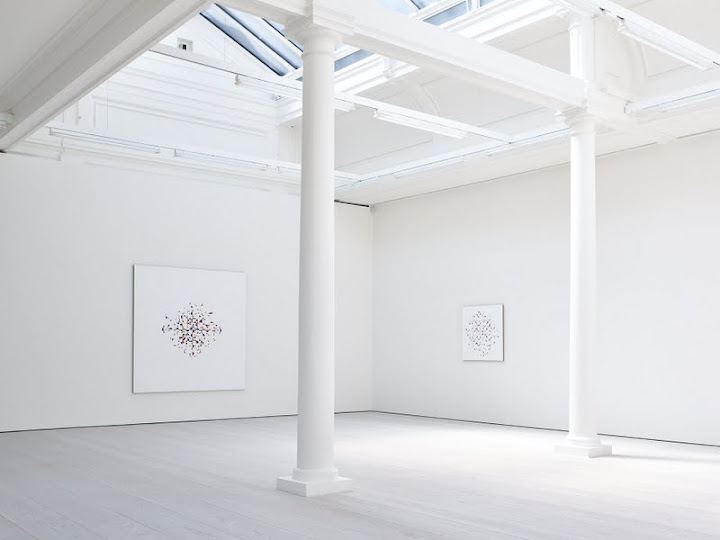 Orozco went over old shops in Tokyo collecting pieces of traditional Japanese kimono silks that he has intervened and mounted on scrolls, instead of framing them, a loyal decision to the origins of the work. The artist has composed collages on the fabrics, creating irregular patterns and circles, a recurrent motif in his artistic universe.

Despite of having used such a precious format and traditional creative methodology, he wanted the pieces to be contemporary avoiding being too romantic. One can directly relate the scrolls to Japanese tradition, simple and clean, but when one has a closer look to them, other definitions come to mind, identifying more complex meanings that belong to Orozco’s diverse background.

Despite of having been inspired by an ancient artistic tradition, the symbology and methodology that these pieces involve are very precise. As he says humorously, they are Japanese high-tech pieces, in opposition to the Mexican low-tech pieces displayed in the contiguous room. 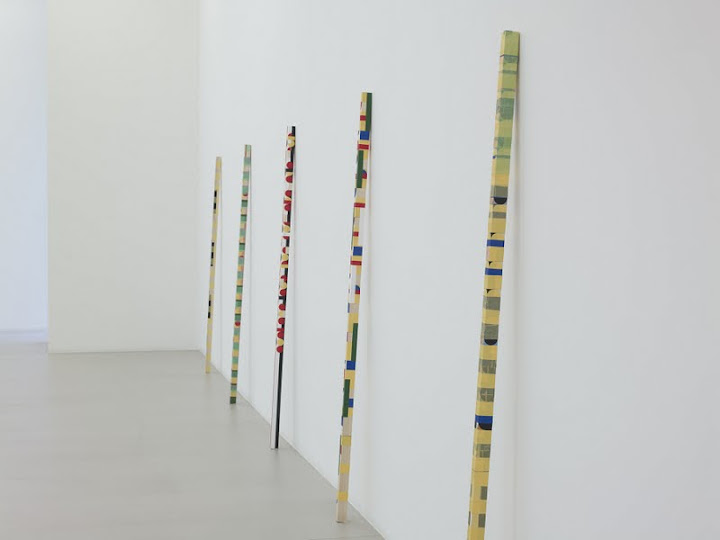 By Mexican low-tech he refers to his new works of hand-made poles and square staves that he has painted with bright colours. As Briony Fer says, they are low-tech because they could have been made anywhere, in this case, at Orozco’s apartment in Tokyo.

This series brings together local Japanese materials with distinctive Orozco’s geometric forms, as well as some coloured plastics wrapped around adding a glowing look to the pieces. The length of the poles has also a certain meaning, as he selected six shaku timbers, the measure used for the tatami that cover the floors of Japanese floors.

The poles are displayed by intervals leaning against the walls, giving the impression that the pieces themselves are transferring an encrypted message to the viewers, or even trying to perform the notes of an abstract melody. Despite its simplicity, the displayed wooden poles have a majestic look, almost hiding a sign of spirituality. 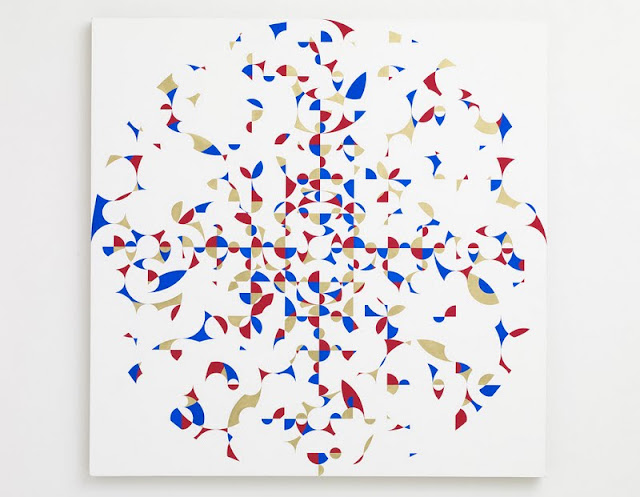 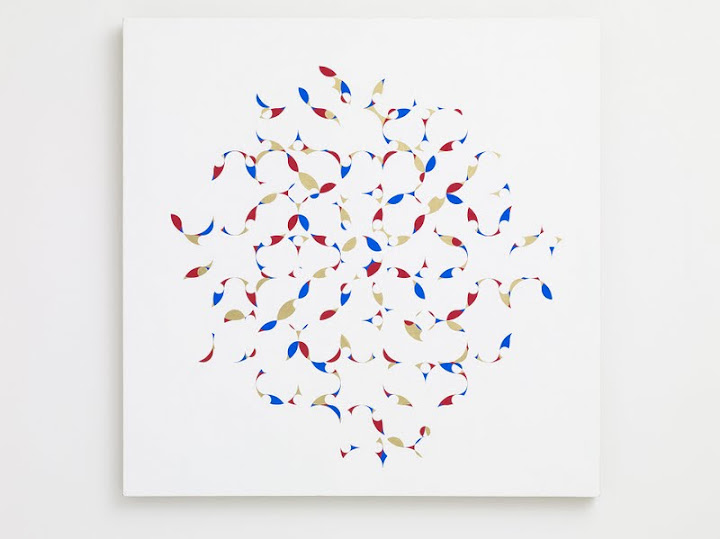 The gallery also presents a selection of his renowned paintings of red, blue and gold circular patterns. Created in the last six moths in Mexico, they constitute a continuation of this series with some additional new experimentation, which he assures wants to follow in the future.  The artist finds the balance in the combination of the three colours, but this time he allows the white to have a more active presence, playing an important part in the creation of circles from the non-colour.

The use of circles is reminiscent of the notion of the self in the artist practice and of how he understands the position of the individual regarding his environment: “an individual interacting with reality, the self in a specific situation in dialogue with another culture, with a specific object that always belongs to a political sphere and to a social instrument” (Gabriel Orozco, Museum of Contemporary Art, Tokyo, 2014). 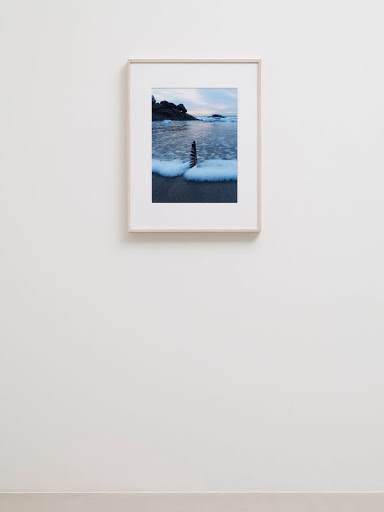 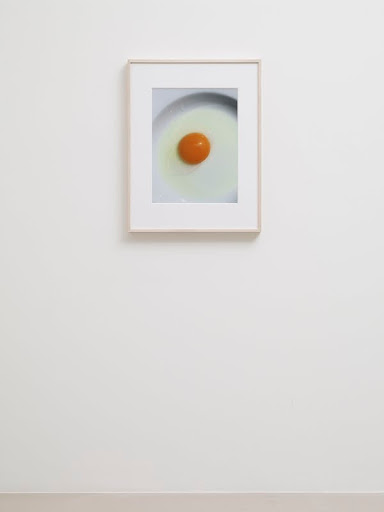 Orozco’s pictures are a witness of this notion of the self through the presence of the circle, but they are also surrounded by the distinctive romanticism of travel diaries. The use of an iPhone instead of a camera fits perfectly in his nomadic life, having the chance to spontaneously capture moments and coincidences created by time and nature that he encounters in his pathway.

The exhibition at Marian Goodman Gallery, which will be open until 7th August, shows Orozco’s excellent skills to follow an osmotic creative process, where he allows himself to be invaded by the reality surrounding him, being fully conscious of the position of himself as the pivotal centre. 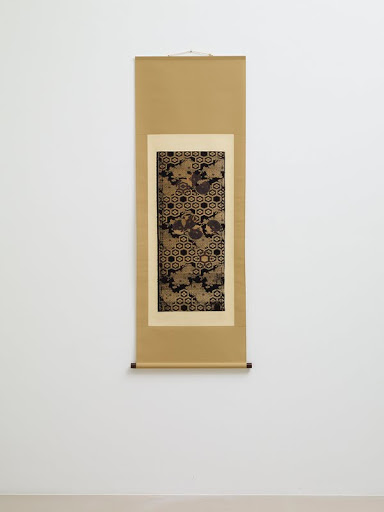 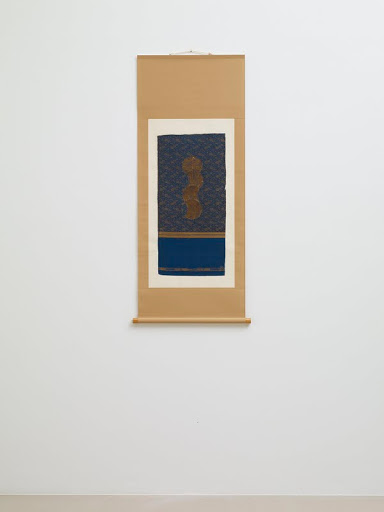