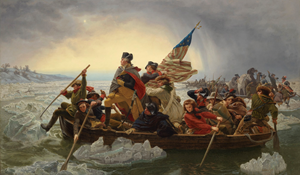 Christie’s has announced that Emanuel Leutze’s Washington Crossing the Delaware (estimate: $15 million – 20 million), a painting of transcendent historical impact, will be a highlight of the 20th Century Evening Sale taking place live on 12 May 2022 at Rockefeller Center.

Christie’s has announced that Emanuel Leutze’s Washington Crossing the Delaware (estimate: $15 million – 20 million), a painting of transcendent historical impact, will be a highlight of the 20th Century Evening Sale taking place live on 12 May 2022 at Rockefeller Center. The painting which hung for decades in the White House is one of two extant versions by Leutze. The other version is the centerpiece of the American Wing at the Metropolitan Museum of Art. Leutze’s powerful imagining of a key moment in American history has been a cultural phenomenon from the minute it was seen and has been reproduced more than almost any painting in American history. This picture, which defined its era and has had a profound and lasting impact on art history and popular culture, will take its place in Christie’s New York saleroom during the 20/21 Marquee Sale Week alongside other definitive images of modern history, including Claude Monet’s Parlement, Soleil Couchant, Andy Warhol’s Shot Sage Blue Marilyn, and Mark Rothko’s Untitled (Shades of Red).

Tylee Abbott, Head of Department, American Art, said: “Emanuel Leutze’s Washington Crossing the Delaware is arguably the most important work of pre-War American Art to ever come to the market, and indeed set the record for any American painting at auction when sold in the 1970s. The only other extant version by Leutze is the centerpiece of the Metropolitan Museum of Art’s American Wing. The present version hung for decades in the White House, further demonstrating its importance to the nation. Depicting a dramatic moment at the beginning of our country, this iconic image serves as the origin of the archetype of an American hero that has become imbedded in our collective imagination and firmly places this work as one of the most famous images in art history.”

Vanessa Fusco, Co-Head of 20th Century Art Evening Sale, said: “Washington Crossing the Delaware is more than a painting; it is an image that has transcended any single canvas, or the artist who created it. Leutze’s composition has been reused and reinterpreted by artists from Grant Wood to Robert Colescott, and found its way into popular imagery from the Saturday Evening Post to The New Yorker. Within the 20th Century Evening Sale context, it is in the company of watershed works of art which defined their moment and fixed themselves in the public imagination. These extraordinary works speak to each other across decades about beauty, power, expression, perception, and the place of art in an era when images can be easily mass produced. Christie’s is honored to offer them together in an innovative sale format that promotes dialogues between the defining cultural moments of the past century.”

EMANUEL LEUTZE’S WASHINGTON CROSSING THE DELAWARE
This iconic painting has been published countless times in textbooks and articles, seen on U.S. postal stamps, and on the New Jersey state quarter, and is ubiquitous in popular culture. It is the creation of the artist Emanuel Leutze (1816-1868), an immigrant from Germany, who grew up in Philadelphia, returned to Europe as an aspiring painter, and then finished his career in the United States, where he gained fame and was a friend and mentor to many notable American painters.

Leutze and studio assistants, including Eastman Johnson, produced three known versions of this composition. The first was in the Kunsthalle Bremen, in Germany, and was destroyed in a World War II air raid. The second forms the centerpiece of the American Wing of The Metropolitan Museum of Art, in New York. The third is the present work. It is almost identical in composition to the Metropolitan’s version, and was widely exhibited in its own right. The present version was painted by Leutze with Johnson’s assistance and was also reproduced as an engraving that was widely disseminated and brought this composition international fame.

The picture being offered by Christie’s was commissioned by the original purchaser of the Metropolitan’s painting, the art dealers Goupil, Vibert & Co. They wanted a smaller version that could be more easily reproduced by the engraver, Paul Girardet, as a print. This painting was also exhibited in its day at major venues in New York, Philadelphia, and Chicago. Thanks to the engraving, within short order the image was everywhere. “Every town and village along that vast stretch of double river-frontage had a best dwelling,” wrote Mark Twain in Life on the Mississippi, 1883. “Over middle of mantel, engraving—Washington Crossing the Delaware; on the wall by the door, copy of it done in thunder-and-lightning crewels by one of the young ladies …”

Today, Washington Crossing the Delaware remains as relevant and renowned in American culture as when it debuted. The present version has had a notable modern exhibition history, from multiple shows at The Metropolitan, to the Smithsonian Institutions in Washington, D.C. and even in Düsseldorf. This painting hung in The White House for decades, beginning in the 1970s in the Nixon and Carter Administrations, through President Obama’s tenure, when it hung in the West Wing lobby. When the painting was installed on long-term loan in 1979, the curator Clement Conger remarked that this work was among “the most important American paintings ever to hang in the White House.”