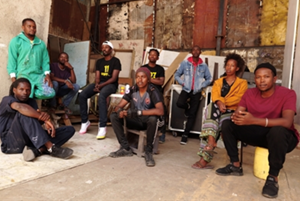 At the suggestion of the Board of Trustees, the Magistrate of the City of Kassel as the Board of Directors of the Arnold-Bode-Foundation has decided to bestow the 2022 Arnold-Bode-Award on the Collective Wajukuu Art Project.

At the suggestion of the Board of Trustees, the Magistrate of the City of Kassel as the Board of Directors of the Arnold-Bode-Foundation has decided to bestow the 2022 Arnold-Bode-Award on the Collective Wajukuu Art Project. The award is endowed with € 10,000.

Bode’s collection of artworks, given to him by documenta-artists in 1975, at the occasion of his 75th birthday, constitutes the capital stock of the Arnold-Bode-Foundation. It was established by the City in 1978, one year after the death of the „Father of documenta“. The foundation’s purpose is to promote art and culture, specifically by giving the Arnold-Bode-Award.

The prize has been awarded since 1980, initially once yearly, bi-annually after 1987. It is however mandatory that the award be given following a documenta exhibition, to recognize exemplary achievements in the field of contemporary art. Award recipients do not necessarily need to be documenta-artists, but their work needs to meet documenta standards.

In her statement on the decision, Dr. Susanne Völker, Head of the Department of Cultural Affairs, went on to explain: “Wajukuu Art Project is a community-based organization situated in the Mukuru slum in Nairobi. The project was established in 2004 by a group of artists with a common goal: to make Mukuru a place where children can thrive and develop a sense of community, in an environment dominated by poverty and crime, by becoming involved in art projects. I am pleased with the decision to grant this prestigious award to Wajukuu Art Project. In doing so, the board of trustees follows the central idea of documenta fifteen, to highlight collectives as a specific form of organization and artistic practice, working to promote the common good.“

The collective’s contribution to documenta fifteen impressed visitors with its visual impact: a dark architectural installation made of rusty corrugated iron, depicting the precarious environment of these youths, and representing a perfect backdrop for the artworks on exhibit. Upon entering documenta Halle and passing through a gloomy tunnel, accompanied by a soundscape of engine noise and siren wails, visitors were transplanted to the collective’s reality of life. The images and sculptures on display in the exhibition space represented topical amalgamates of materials readily available in Mukuru‘s slum and contemporary form language, such as a striking ready-made sculpture made of battered knives, equally threatening as impressive. A documentary film exemplified why in spite of their social commitment Wajukuu Art Project views its art practice as setting artistically ambitious rather than socio-educational standards. Still, their guiding principle is: Transform yourself into what you want to be – not necessarily an artist.

A primary objective of Wajukuu Art Project’s overall installation was to enter into dialogue with documenta fifteen visitors, and to offer a venue for exchange.

Wajukuu Art Project would like to use their participation in documenta fifteen as a starting point for their sustainability project “Killing Fear of the Unknown“, and to establish a permanent, collective-based project space in Mukuru, to make it possible for members to receive financial support, and to build wood workshops in order to train young course participants.

The prize money has been provided in equal parts by Kasseler Sparkasse and by Sparkassen-Kulturstiftung Hessen-Thüringen. The award ceremony is planned for early 2023.