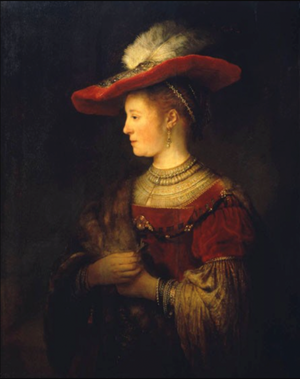 One of the most eminent collections of its kind, the Old Masters Picture Gallery in Wilhelmshöhe Palace enjoys a worldwide reputation. Its origins go back to the collections of the Landgraves of Hesse, which means it reflects more than 500 years of history.

One of the most eminent collections of its kind, the Old Masters Picture Gallery in Wilhelmshöhe Palace enjoys a worldwide reputation. Its origins go back to the collections of the Landgraves of Hesse, which means it reflects more than 500 years of history. The c. 500 works on display, distributed over three floors, offer a magnificent overview of European painting from the Late Gothic era to Neo-Classicism.

The main emphasis of the collection is on 17th-century Dutch and Flemish painting, with numerous masterpieces by Rubens, Frans Hals, Van Dyck und Jordaens. Our collection of paintings by Rembrandt, which includes the famous »Jacob Blessing the Sons of Joseph« and the portrait of Saskia, is among the largest in the world. Among the highlights of our departments of Old German, Italian, French and Spanish painting are works by Dürer, Tizian, Poussin and Murillo.

The origins of the gallery go back to 1509, the year when Lucas Cranach the Elder painted a small winged altarpiece to commemorate Landgrave Wilhelm II. The most passionate collector of them all was Landgrave Wilhelm VIII, who over the years from 1748 to 1756 commissioned his diplomats and agents to buy about 800 paintings in the Netherlands, Paris, Brussels, Antwerp, Venice and Germany. In 1749–51, a gallery to house the collection was built at the back of the Landgravial town palace between Auehang and Frankfurter Straße. In 1877, the paintings were relocated to a new building, the Neue Galerie on Schöne Aussicht, where they remained until the outbreak of WWII. Since 1974 the collection has been on display at the Old Masters Picture Gallery at Wilhelmshöhe Palace.