The Part I of the Paul G. Allen Collection Sale at Christie's Totals $1.5 Billion in a Single Night 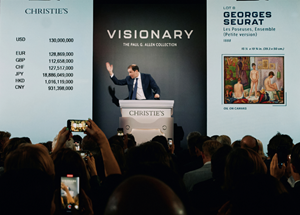 Visionary: The Paul G. Allen Collection, Part I at Christie’s Rockefeller Center featured 60 masterpieces drawn from the greatest movements of the last five centuries of art history, which brought a combined $1,506,386,000.

On November 9, 2022, Christie’s and the estate of the philanthropist and co-founder of Microsoft, Paul G. Allen, celebrated an evening sale of historic proportions. Visionary: The Paul G. Allen Collection, Part I at Christie’s Rockefeller Center featured 60 masterpieces drawn from the greatest movements of the last five centuries of art history, which brought a combined $1,506,386,000, establishing this as the most valuable private-collection sale of all time.

The auction broke the world-record for a sale just halfway through the bidding when the auctioneer, Jussi Pylkkänen, knocked down Alberto Giacometti’s sculpture, Femme de Venise III, for $25,007,500. The auction was 100% sold, and 122% sold against low estimate. All of the estate’s proceeds from this historic sale will be dedicated to philanthropy, pursuant to Mr. Allen’s wishes.

It was a sale of one highlight after another, with five paintings – the most ever in one sale – bringing more than $100 million each, with each one setting a world record. Three of the lots were among the top lots sold of all time. Georges Seurat’s groundbreaking statement on pointillism, Les Poseuses, Ensemble (Petite version) led the evening at $149,240,000. Paul Cezanne’s monumental landscape, La Montagne Sainte-Victoire brought $137,790,000. Vincent van Gogh’s Verger avec cyprès, which captures the artist’s early encounter with the South of France, achieved $117,180,000. Paul Gauguin’s Maternité II from 1899, one of his most important years, made $105,730,000. Gustav Klimt’s evocative depiction of a Birch Forest, made $104,585,000. The number and size of the record prices set was unprecedented.

Marc Porter, Chairman, Christie’s Americas, said, “The Paul G. Allen Collection will always be celebrated as a monumental collection of masterpieces in support of philanthropy on a historic scale. Christie’s and the Allen Estate have set the world record for the value of a single auction, and it is deeply gratifying that we were able to do so for the benefit of others. Let’s all take a moment to recall that this was made possible by one man’s passionate pursuit of excellence, and his commitment to making the world a better place. Those are values that Christie’s feels deeply and thanks to Paul Allen, we were able to live our values on this important night.”

Max Carter, Vice Chairman, 20th and 21st Century Art, said “In these last weeks and months, collectors, art lovers and our colleagues around the world have stood on the mountaintop, overlooking 500 years of visionary achievement from Botticelli to Seurat, Cezanne, Van Gogh, Gauguin and Freud—and the view was breathtaking. We may never see this range, quantity and quality of masterpieces in one private collection again.”