Venice City Celebrates the Completion of the Rialto Bridge 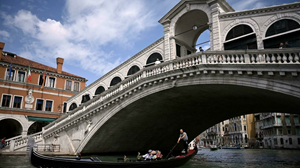 Venice is celebrating the completion and full restoration of its Rialto Bridge. As part of the celebration, renowned tenor singer Andrea Bocelli, sang an opera atop the gem of Renaissance art spanning the Grand Canal.

Venice is celebrating the completion and full restoration of its Rialto Bridge. As part of the celebration, renowned tenor singer Andrea Bocelli, sang an opera atop the gem of Renaissance art spanning the Grand Canal. With its elegant low arch and distinctive arcades, the gleaming white bridge spanning the Grand Canal at its narrowest point is one of Venice's most photographed tourist attractions -- and until the mid-19th century, the only way to cross besides by boat.

The 5-million-euro ($6-million) head-to-toe restoration of the bridge, funded by Diesel founder Renzo Rosso, was completed in 2019 after beginning in 2015, organisers said. But a planned inauguration ceremony twice had to be delayed because of Covid-19.

"This bridge is the bridge of Venice," Luca Zaia, president of the Veneto region of which Venice is the capitol, told invited guests at the bridge's apex. "It's a piece of history, it's an open-air museum."

Bocelli sang the famous Puccini aria "Nessun Dorma" during a brief ribbon-cutting ceremony, as the Grand Canal's stream of gondolas, water taxis and barges passed underneath.

"It's been 450 years since it was built. It required meticulous work," Rosso told AFP.

The bridge with three walkways and a 6.5-metre-high arch is the oldest that currently crosses the Grand Canal, connecting the district of San Marco to the Rialto, the city's commercial center and famous Rialto market.

It is considered an architectural masterpiece for its two arcades of shops and pedestrian walkways with balustrades facing the water -- all supported by 6,000 wooden piles. Built between 1588 and 1591, for centuries its shops were exclusively the domain of goldsmiths. But over 400 years of wind, water and pollution -- and the modern-day influx of tourists -- had taken their toll on the bright white Istrian stone. The bridge's entire 5,000 square metre surface area was restored, including its decorative bas-reliefs. The restoration also involved the flooring, the roofs of the shops lining the bridge and the balustrades.

Millions of tourists visit the UNESCO heritage site of Venice each year, and in July, Venice narrowly avoided being placed on UNESCO's endangered list. The UN body warned of the need for a sustainable tourism management plan. City officials have already decided the best way to manage crowds lies in making tourists book ahead and pay.

Earlier versions of the bridge were more fragile, with a 12th-century pontoon bridge and later wooden covered bridges having burnt or collapsed.