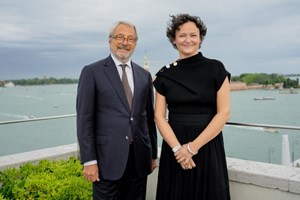 The President of La Biennale di Venezia, Roberto Cicutto, and the Curator of the 59th International Art Exhibition, Cecilia Alemani have announced the title and theme of the Biennale Arte 2022, which will take place from April 23 to 27 November 2022.

The President of La Biennale di Venezia, Roberto Cicutto, and the Curator of the 59th International Art Exhibition, Cecilia Alemani have announced the title and theme of the Biennale Arte 2022, which will take place from April 23 to 27 November 2022  in the Giardini, at the Arsenale, and at various sites around Venice.

Titled ‘The Milks of Dreams’, the name is borrowed from a book by Leonora Carrington, in which, as Cecilia Alemani says, “the Surrealist artist describes a magical world where life is constantly re-envisioned through the prism of the imagination, and where everyone can change, be transformed, become something and someone else. The exhibition takes us on an imaginary journey through metamorphoses of the body and definitions of humanity.”

In explaining her selection of this title, Cecilia Alemani said: In the 1950s, while living in Mexico, Carrington dreamed up and illustrated mysterious tales, first directly on the walls of her home, then in a small notebook called The Milk of Dreams. Told in a dreamlike style that seemed to terrify young and old alike, Carrington’s stories describe a world set free, brimming with possibilities. But it is also the allegory of a century that imposed intolerable pressure on the individual, forcing Carrington into a life of exile: locked up in mental hospitals, an eternal object of fascination and desire, yet also a figure of startling power and mystery, always fleeing the strictures of a fixed, coherent identity.

This exhibition is grounded in many conversations with artists which took place over the past months. The questions that kept emerging seem to capture this moment in history, when the very survival of the species is threatened, but also to sum up doubts that pervade the sciences, arts, and myths of our time. How is the definition of the human changing? What constitutes life, and what differentiates animals, plants, humans, and non-humans? What are our responsibilities towards the planet, other people, and the other organisms we live with? And what would life and the Earth look like without us?

These are some of the guiding questions for this edition of the Biennale Arte, which focuses on three themes in particular: the representation of bodies and their metamorphoses; the relationship between individuals and technologies; the connection between bodies and the earth.