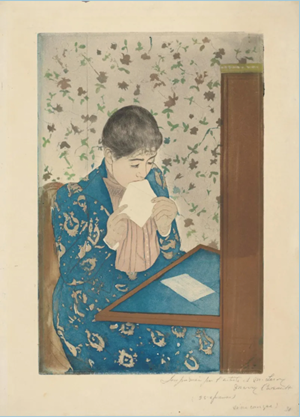 The Van Gogh Museum has acquired four rare prints by the American artist Mary Cassatt for its collection.

Mary Cassatt (1844-1926) was part of the first generation of Impressionists, and was a contemporary of Vincent van Gogh. The new acquisitions – three large colour etchings and a singular lithograph in black – are considered highlights of her oeuvre.

Cassatt was far ahead of her time: her decision to use colour etchings was daring, and she was closely involved with the complex and time-consuming production process; Cassatt designed and printed most of the etchings herself.

Emilie Gordenker, General Director of the Van Gogh Museum: ‘We have been hoping to acquire important prints like these for many years, and are delighted to now be able to add them to our collection. We are very grateful to the VriendenLoterij, the Mondriaan Fund, the Rembrandt Association as well as individual donors who make up the The Yellow House circle for financing these remarkable acquisitions in full’.

The new prints will be exhibited on a dedicated wall in the permanent collection as soon as the museum reopens to the public.

With her Impressionistic paintings and drawings, Mary Cassatt was an innovative force in the late-19th-century Parisian artworld. Cassatt was initially sceptical of printmaking, but in about 1879, she recognised the allure of graphic techniques – as did her contemporaries and colleagues Edgar Degas and Camille Pissarro.

The four acquired prints, which are in excellent condition, are counted among the finest graphic works produced in the fin de siècle. ‘Together with the series by Bonnard, Vuillard and Toulouse-Lautrec, these are without doubt the most successful colour prints ever produced’, wrote renowned critic Claude Roger-Marx in 1938.

In the Theatre (c. 1880) is the result of Cassatt’s early experiments with lithography. The print shows a woman in a loge viewing the auditorium through opera glasses, but the woman herself is being watched by the rest of the audience. Only a handful of prints of this work are known to exist.

The other three works, ‘The Fitting’, ‘The Letter’ and ‘Woman Bathing’ (1890-91) are all from The Ten: a ten-part print series with which Mary Cassatt secured her name as a (print) artist.

Cassatt drew inspiration for the series from the colourful Japanese woodcuts that were exhibited in Paris in 1890. Cassatt wrote to her colleague Berthe Morisot:

‘We could go to see the Japanese prints at the Beaux-Arts. Seriously, you must not miss that. You who wants to make colour prints couldn’t dream of anything more beautiful. I dream of it and don’t think of anything else but colour on copper’.

In this series, Cassatt explored the intimate daily rituals of a woman from the upper middle class, a guarded world to which she – as a woman – had access. In 1891, the decision to produce colour etchings was daring to say the least – it was a complex and laborious technique that artists usually outsourced. However, Cassatt was involved in the entire process: she spent months working closely together with master printer Leroy on etching, finishing, inking and printing her highly subtle and vivid colour scenes. 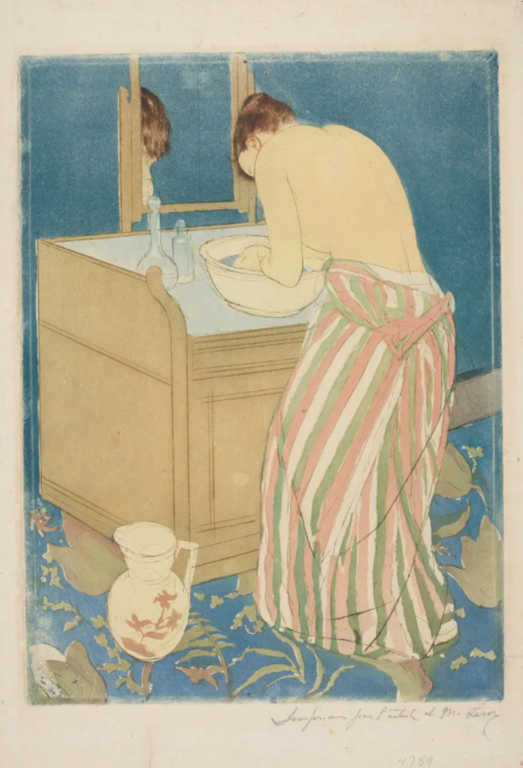 The Van Gogh Museum collects and exhibits works by Vincent van Gogh and his contemporaries. The museum is home to one of the world’s most significant collections of French prints from the second half of the 19th century. The museum had long wanted to add works by Mary Cassatt to its collection of Impressionist prints.

Fleur Roos Rosa de Carvalho, Senior Curator: ‘Colour etchings by Mary Cassatt in their final state are extremely rare, and less than a dozen have come up for sale in recent decades. The four prints, unrivalled in terms of experimentation, technical subtlety, styling and intimacy of the subjects, are an important addition to the Dutch National Art Collection.’

‘The Van Gogh Museum is therefore delighted to be able to exhibit the four works in a temporary presentation as part of the permanent collection once the museum reopens’.

The acquisition of the four artworks by Mary Cassatt was fully financed by the Vrienden Loterij, the Mondriaan Fund, the Rembrandt Association (with the additional support of the Maljers-de Jongh Fund, the Liesbeth van Dorp Fund, the Marijke Laarhoven Fund and the Claude Monet Fund) and the members of The Yellow House.