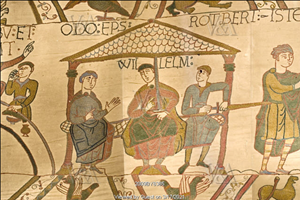 The V&A and the City of Bayeux have signed a Memorandum of Understanding, which will see the two organisations work together to share research and expertise around the Bayeux Tapestry.

The V&A and the City of Bayeux have signed a Memorandum of Understanding, which will see the two organisations work together to share research and expertise around the Bayeux Tapestry.

The agreement marks 150 years since the first collaboration between the South Kensington Museum (now the V&A) and the City of Bayeux. As a result of careful diplomatic negotiations between the museum’s first director, Henry Cole, and the Mayor of Bayeux, M. Urbain-Abel Marc, the Victorian photographer Joseph Cundall was given permission to photograph the entire Bayeux Tapestry for the Science and Art Department, the governing body which oversaw the South Kensington Museum.

In 1872, the Bayeux Tapestry was photographed by Edward Dossetter, under Cundall’s orders, for the museum, producing 180 glass negatives detailing each section of the 68-metre-long tapestry. Six full-size copies were made by the Arundel Society from Dossetter’s negatives, which were then coloured by hand, creating the longest composite photograph made in the nineteenth century.

Dossetter’s negatives remain in the V&A collection, as well as two of the Arundel Society copies – one on a long roll, and the other divided into 25 separate sections.

A key focus of the V&A’s and the City of Bayeux’s collaboration is a research, conservation and digitisation project around the photographic negatives. Subject to funding, the glass plates from 1872 will be digitised, then integrated into a unique digital database that will showcase the Bayeux Tapestry’s appearance in the period after its restoration at the end of the nineteenth century. The “SIDS” (Information System Spatial Documentary) is a major digital project led by the City of Bayeux and the State and developed by the University of Caen Normandy and the CNRS (Centre national de la recherche scientifique).

The partnership will also provide the City of Bayeux access to the two Arundel Society copies of the Bayeux Tapestry in the V&A collection, as well as opportunities for research, curatorial and scientific exchange.

In celebration of the 150th anniversary of the museums’ relationship, a temporary exhibition Tapisserie de Bayeux: Fragments d'histoires will also open at the MAHB - Musée d'Art and History Baron Gérard in Bayeux on Saturday. It tells the story of the original fragment of the tapestry that was returned to Bayeux in 1872.