Unseen Masterpiece by John Constable Unveiled for the First Time in Almost 200 years at the Royal Pavilion, Brighton 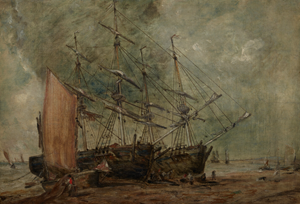 Labourers and fishermen on Brighton & Hove’s beaches captured the imagination of the English artist and inspired him to produce Colliers unloading on Hove Beach, looking towards Shoreham, Brighton.

Labourers and fishermen on Brighton & Hove’s beaches captured the imagination of the English artist and inspired him to produce Colliers unloading on Hove Beach, looking towards Shoreham, Brighton.

The painting is now on display in public for the first time in the Royal Pavilion thanks to the generosity of London art dealer and collector Danny Katz, a former Brighton resident.

The painting, which was rediscovered in 2017, is a significant addition to the body of John Constable’s work. Previously completely unknown to art experts, it belonged to the great French collector Camille Groult (1832–1908), who established the most significant collection of British art in France in the nineteenth century.

Painting on display at the exit of The King’s Apartments