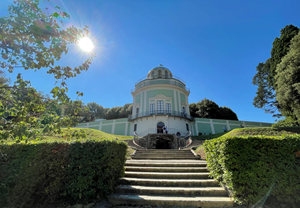 The Uffizi Galleries in Florence, Italy, have introduced an bold €50m grasp plan to rebuild the close by Boboli Gardens inside eight years. This system “Boboli 2030” reveals 40 initiatives to guard the park from the ruinous results of local weather change, whereas making it extra vitality environment friendly, accessible and enticing.

Presented the restoration of the Kaffeehaus, the first of three refreshment areas inside the Boboli Gardens and the Garden of the Royal Stables. A specific master plan will provide the restoration of sculptures and fountains, the optimization of water resources, the opening of new spaces, and the re-functionalization of buildings with many new services for visitors.

With its more than 33 hectares of history, art and nature, the Boboli Gardens, a true green lung and open-air museum in the heart of Florence, represent one of the best examples of formal gardens in the world. Populated with statues and adorned with grottoes and imposing fountains, the park realized in the 16th century by Duchess Eleonora di Toledo, now becomes the protagonist of a mighty program of interventions that, over the next eight years, will make it even more beautiful, accessible and environmentally sustainable. The core of 'Boboli 2030' project is the enhancement of the Garden's vast architectural heritage, the restoration and rehabilitation of sculptures and fountains, the improvement of its enjoyment for visitors, the creation of new services, the opening of new spaces, the optimization of water resources, a new lighting and video surveillance system.

The reopening of the Kaffeehaus, new signage, and recently completed interventions Many restoration interventions have just been completed (or nearing completion) at Boboli (for which more than 2,400,000 euros were needed): the installation of new signage (180,000 euros); the restoration of the Monkey Fountain (35,000 euros) and the Kaffeehaus (700. 000 euros); the renovation of the first part of the Princes Garden (195,000 euros), the introduction of an innovative video surveillance system at the Pagliere (100,000 euros), passing through the redevelopment and renovation of the entrance to the Piazza della Calza (110,000 euros) and the Camellia Garden (875,000 euros). The architectural renovation of the historic Kaffeehaus has been completed, including the restoration of the 18th-century frescoes and the construction of a new air conditioning and lighting system. After years of being closed to the public, the atmospheric grand-ducal cafeteria will reopen in October, equipped with a counter, tables inside and outside, and toilets, and will feature a large garden and a panoramic terrace overlooking the breathtaking panorama of Florence.

For the Camellia Garden, on the other hand, located between the south wing of Pitti Palace and the Palazzina della Meridiana, ere required structural consolidations and an extensive restoration of the sculptures and wall paintings in the grotto; the functionality of the water features of the fountains and the drainage system were restored; a new irrigation system was built to maintain 39 varieties of camellias; and a lighting system was installed to make evening openings possible. New signage for the Garden was also completed, with hundreds of signs and new maps to make clear the slopes and duration of the paths to aid usability for all visitors.

Upcoming projects: restoration of the large ponds and all the statues, new lighting for the garden, an exhibition center in the pagliere building:

- the construction of an underground elevator that will connect the Ammannati Courtyard with the Mezzanine of the Muletta and the Boboli Amphitheater (3,000,000 euros);

- the architectural restoration and re-commissioning of the building at the Prato dei Castagni (1,450,000 euros);

- the restoration of all the sculptures of the Gardens (3,500,000 euros), with the more than 300 statues from the Classical, Renaissance and Baroque periods and the substitution of the most delicate works with copies;

The following are the other interventions:

- construction of a new accessible restroom inside the Amphitheater (130,000 euros), completing the rearrangement of the area's toilets.

The intervention in the Muletta area will connect the Ammannati courtyard and the Amphitheater via an elevator, encircled by an octagonal staircase, whose glass termination evokes the destroyed chapel of Christina of Lorraine in shape, position and proportions. The elevator will make accessible for the first time the Mezzanine of the Muletta with frescoes by Salvator Rosa, Pietro da Cortona, Jacopo Chiavistelli, and Andrea Ciseri and the Garden of Giovan Carlo de' Medici. As for the Vasca del Nettuno and the Vasca dell'Isola, after a survey campaign and various diagnostic investigations (12 3D scans of the sculptures for the Vasca del Nettuno and 60 3D surveys of the sculptures for the Vasca dell'Isola), the plan is to clean the water, optimize water resources and restore the water features. Both fountains will also undergo architectural and sculptural restoration. The project for the Chestnut Meadow includes a playroom, a cafe and a large outdoor terrace with seats under the shade of cypress trees. Again, a general architectural renovation will be carried out, there will be a new lighting system and an outdoor pathway will be built tending to ensure full accessibility to the spaces. New rooms for workshops, offices and study rooms will be built in the Annalena Building, intended for the Department of Education. The Pagliere building located in the heart of the garden of the Royal Stables will also be restores: a new lighting and air-conditioning system will allow the activation, on the ground floor of the building, of a ticket office and bookshop, a bar area, and storage room for the collection of carpets and tapestries. On the second floor, on the other hand, a vast exhibition space of over 800sqm will become the center of the Uffizi Galleries for temporary exhibitions.

Future projects: the 'rebirth' of the Amphitheater and of the Column Lawn; the redevelopment of the entrances

In a brief preview of future projects we can include the completion of the Princes Garden, which will extend over three terraces, but also the redevelopment of the exits to Forte Belvedere, Porta Romana and La Specola. The main interventions in this last part of Boboli 2030 will be the integral restoration of the Amphitheater and the garden in front of it; the architectural, sculptural and vegetal restoration of the Prato delle Colonne with the construction of new water disposal facilities; the securing of the boundary walls and historical gates of the Monumental Park of the Royal Stables; the rehabilitation of the path leading from the Sughera to the so-called Lavacapo statue; and the construction of a new and increased Photographic Department, new cataloging and archiving spaces, a restoration laboratory, new offices for the botany department and changing rooms for gardeners. The restoration of the Mula, the Mascherino Tower and the Mostaccini Fountain are planned for the next years.