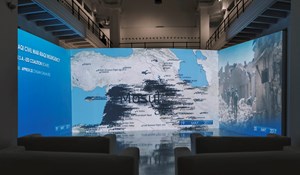 Kunsthall 3,14 is proud to present three distinct artists and their projects, Unending Lightening by Cristina Lucas in the Exhibition hall, Target by Zartosht Rahimi in the Vault, and Shot Gun Architecture by Justin Bennett in the Parabol.

Kunsthall 3,14 is proud to present three distinct artists and their projects, Unending Lightening by Cristina Lucas in the Exhibition hall, Target by Zartosht Rahimi in the Vault, and Shot Gun Architecture by Justin Bennett in the Parabol.

These projects thematize different aspects and effects of geography of power and war-making. Through the various artworks, we are invited to see and discuss some of the more central and inflamed forms of power in our own time. It is the space between the extremes, on one side the underlying issues and relations that might trigger war and on the other the devastating consequences for human inflicted by war, which are explored and transformed into artistic acts. 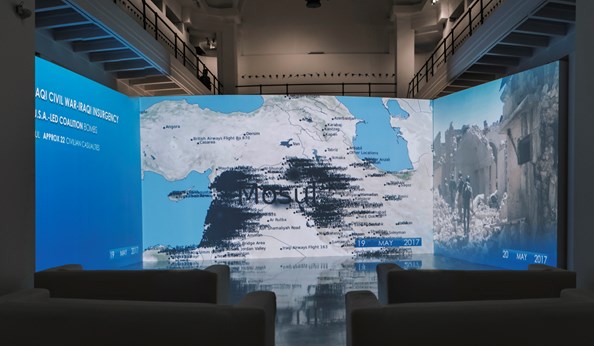 Cristina Lucas is featured with three works in her exhibition. They work together as a narration, starting with the single video projection of the work Piper Prometheus (2013), where an aircraft flies a commercial banner with the print of the formula that enables it to fly. The desire to be free from Earth and able to fly freely has captured human´s imaginations for as long as the time remembers. Thanks to the lift formula L= (1/2 d v2 s CL) and invention of flying machines, aircrafts were short time after implemented in warfare during the Italo-Turkish War starting 1911.

Lucas 3-channel six-plus hour long video installation, Unending Lightening (2015-), is an open-ended work in progress. Global cartography of aerial warfare, that shows all aerial bombings over civilians since its implementation. The project is composed around historical investigation that is endless, and grievously ongoing due to current events.

The three screens are synchronized and time has been condensed with images changing every 3 seconds; representing one day. The viewer is on one screen presented with the respective military forces responsible for dropping the bomb, date, and type of bomb, the city under attack and if known the number of its casualties. The center screen is Lucas´s cartography indicating where in the world the bomb was dropped, while on the last screen documentary images and film footage are seen of the devastating horror of the act; damage, injuries and death. Unending Lightening has also been divided into three chapters. The first part represents the beginning of aerial bombardments until the first atomic bomb was dropped in 1945, then the second part runs through to the end of the cold war in 1989, while the third section is running through the current time also introducing remote-controlled drone attacks.

In Ignominy Map (2018) Lucas has left out the contours of the borders of her world map, and we are left with indication through her embroidered black bomb spots as a global web of devastation.

Zartosht Rahimi presents in his exhibition the installation Tir'ras (Target), (2018). At first glanse man is still the first weapon of war. Two soldiers seemingly confront and threathen each other, but as the viewer approaches and comes closer, we find that a third soldier has clear shot directed at us. 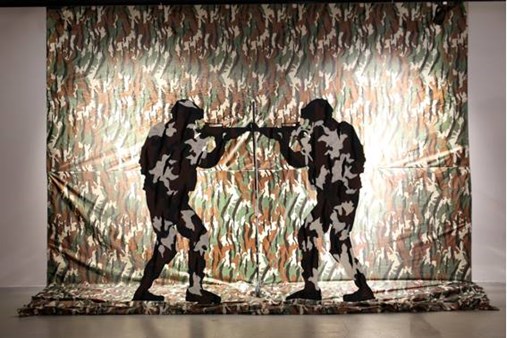 The artist is playing with the form, the light, the shadow, and the camouflage, all sign that we need to have insight into the geography of power. And how transparent is their relationship? Invisibly in the background, where most of us don´t recognize them and therefore can´t oppose or resist their influence.We know there is a distinction between direct power, indirect power, consciousness-controlling power and structual power. But we still need to raised the questions of who holds power? Who has the opportunity to use it? Who really uses it, and for what purpose?

Social scientists often emphasize that power is exercised in different ways. Today they talk about the three faces or three dimensions of power. One is power in open conflicts, the second is invisible power overt the agenda, while the third is power over ways of thinking. All these aspects can lure within the work.

Tir'ras (Target) investigates and discuss the hidden structures that often result in armed attack and by that form and changes individual society and the path of our lives and choices. To what extent does geo-political grid locks influence our choices and ways of thinking? How to challenge power constellations and established allies’ determination of waging war?

Shotgun Architecture (2008) plays with concepts of subjective measurement, translations between sound and image and above all the idea of the publicness of public space. 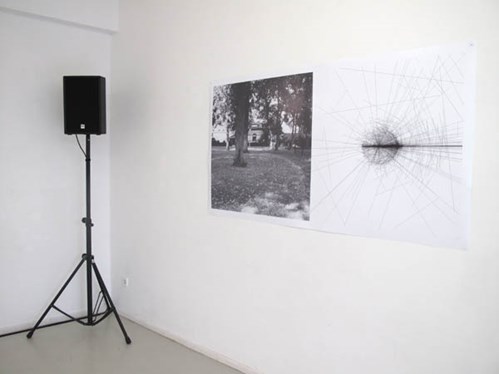 The recordings of the sound of a pistol shot in a number of semi-public places in Amsterdam, were used to create a sound composition which explores the resonances of the chose places by repeatedly recycling or “feeding back” the sounds of the gunshots through the spaces. The resulting piece moves between a dramatic realism to an abstract composition reminiscent of the electronic music of the 1950’s.

Justin Bennett is an artist working with sound and visual media. The everyday sound of our urban surroundings at every level of detail is the focus of his work where he develops the reciprocity of music and architecture, and sound and image.
A founding member of the performance group BMB con, he has played percussion and electronics in many music projects and has produced permanent installations, sound walks, CD-releases and live performances.
Recent work has focused on urban development and public space, resulting in sound, video and graphic works including drawn animation.

Shotgun Architecture on vinyl will be sold throughout the exhibition at Kunsthall 3,14.

PARABOL - in collaboration with Lydgalleriet, who selects a sound work that will be featured through our parabolic loudspeaker sited in the institution's entrance hall. With a particular focus on special commissions and edits, the loudspeaker's adjacent location offers an ambience and mode of address corresponding with the simultaneous exhibition in the exhibition hall and vault.