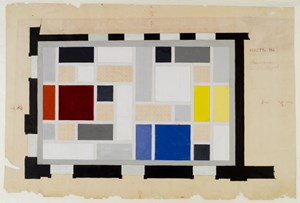 Het Nieuwe Instituut has acquired a model of an interior by Theo van Doesburg for the National Collection for Dutch Architecture and Urban Planning. It is a design for one of the most important architectural projects of De Stijl: the cinema-cum-dance hall in the Aubette building in Strasbourg (1928).

Het Nieuwe Instituut has acquired a model of an interior by Theo van Doesburg for the National Collection for Dutch Architecture and Urban Planning. It is a design for one of the most important architectural projects of De Stijl: the cinema-cum-dance hall in the Aubette building in Strasbourg (1928). The acquired work is a unique hybrid of a gouache and a model, which expresses Van Doesburg’s intended synthesis of painting and architecture. It is also the only model by Van Doesburg to survive. The acquisition has been made possible by contributions from the Mondriaan Fund, Vereniging Rembrandt and Galerie Gmurzynska. 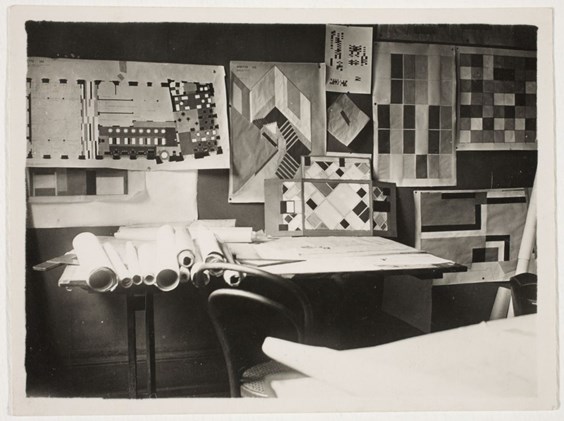 An iconic design for the Aubette

The Aubette’s interior, designed in 1928, is one of the great avant-garde artworks of the 20th century. The design transformed the 18th-century barracks building in Strasbourg into an entertainment complex with cafés, bars, restaurants, a cinema and dance halls. For the most important space in the Aubette, the cinema-cum-dance hall, Theo van Doesburg made a dynamic design with diagonals for the walls and ceiling. It represents a milestone in his oeuvre and in the development of De Stijl. It had no precedent, nor was it ever matched on this scale.

In addition to Van Doesburg, the team for the redesign of the Aubette was made up of the artists Sophie Taeuber-Arp and Hans Arp. They all approached colour, form and architecture as a unity that enters into an interaction with the public. This project gave Van Doesburg his first opportunity to put his theories on abstract interior design into practice. He employed diagonal shapes and lines to create a dynamic whole with the intention of seducing visitors to move from one space to another, thus rejecting the common, more static concept of space. In the Aubette, he also first expressed his ideas about Elementarism: “This oblique dimension not only destroys the earlier means of rectangular expression […] but also provides new optics and phonetics.”1 Central to Van Doesburg’s theory of Elementarism was the idea that you must liberate the human mind in order to raise the individual and the community to a higher level.

The acquired work is a provisional design for the cinema-cum-dance hall from 1926. At first sight, it looks like a one-dimensional work, but it is in fact a model: the walls can fold up. With the exception of this work, all of Van Doesburg’s models have been lost. That makes this object unique in a material sense. The work is also characteristic of Van Doesburg’s representational means. He excelled in depicting space, making no distinction between art and architecture. He was concerned, after all, with the interaction with the viewer. The interior model, which presents a spatial image either folded or unfolded, reflects Van Doesburg’s intended synthesis of painting and architecture. He literally placed the visitor of the space within the art of painting instead of in front of it. From a practical standpoint, the model was intended to convince the Arps and their client of the spatial quality of his ambitions. The numbers in the coloured areas were intended as instructions for the painters who were to implement the design.

There are several drawings in the Van Doesburg collection (in the National Collection of Het Nieuwe Instituut and in other collections) that show the ceiling (or floor) with the walls on a single sheet. He thus returned to the classic representational model used by architects since the Renaissance: with the ceiling in the middle and the walls around it. From that point of departure, Van Doesburg then experimented, for example, with a vertical stacking of the spatial components, as the design for a University Hall (1923) shows. This was a radical break with traditional architectural conventions. Van Doesburg created a plastic architecture, in fact an anti-architecture – certainly if modernism is taken as the starting point – in which only the skin with the coloured walls is required to evoke an atmosphere that was to help shape the “new man” envisioned by the avant-garde.

Part of the National Collection

As a preliminary design, the interior model fits seamlessly within the National Collection, and the Van Doesburg collection that forms a part of it. Unlike many museum collections, the National Collection focuses on the design process and the underlying history of ideas. The drawings of the Aubette in the Van Doesburg collection show the development from the first sketches of 1926 to the final design drawings two years later. Van Doesburg designed all aspects of the interior of the cinema and dance hall, including the furniture, lighting and graphics. 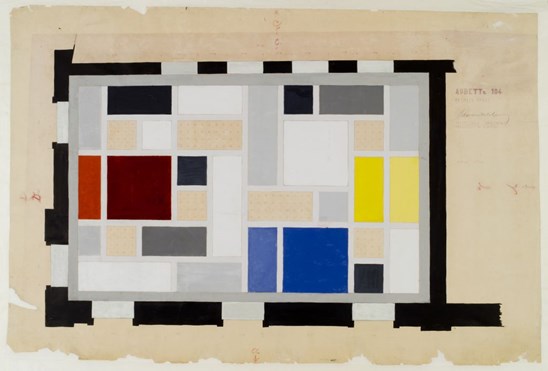 The drawings show how Wagner’s concept of the gesamtkunstwerk was transformed in the 20th century into a total installation by a man who was a master of several disciplines. Placing the surfaces of the interior model alongside the definitive series of drawings, it becomes apparent how Van Doesburg puzzled over the positions of the diagonal forms and the colours. But not only the forms and colours differ from the final design: the gouache paint is also applied in a different manner, and has a more unfinished appearance compared to the final design drawings.

A new perspective on heritage

As of 1 January 2021, Het Nieuwe Instituut became a heritage institution. In the new policy period, the term “innovation” no longer pertains to the creative industry, but to the desire to connect the past and the future on the basis of the National Collection and/or other archives. Network formation and partnerships are essential for making the collection accessible. Using different forms of research – speculative, academic, design, public – we are developing new approaches to looking at the archive, assigning value to it and giving it meaning. After all, the collection’s meaning is not fixed, but is constantly changing and has to be made and proven time and again. More generally, the central question is how heritage institutions can give expression to a greater diversity of voices and improved accessibility through their organisation, collections and associated acquisitions and accessibility policies.