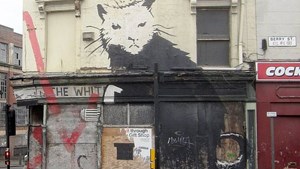 The ‘White House Rat’, also known as “The World's Biggest Banksy”, has been delivered to Hessink’s International Fine Art Auctioneers this week, at their famous location in Zwolle at the ‘Koperen Hoogte’ along the A28

The ‘White House Rat’, also known as “The World's Biggest Banksy”, has been delivered to Hessink’s International Fine Art Auctioneers this week, at their famous location in Zwolle at the ‘Koperen Hoogte’ along the A28. Hessink’s will sell this and other works by Banksy, in the coming weeks by means of a public auction. The ‘White House Rat’ is also the biggest Banksy that has been offered at auction to date. ‘The Whitehouse Rat’ by Banksy, is the largest of his public artworks to have come to market and was nonchalantly painted in broad daylight in Liverpool’s Chinatown, at a time when the artist's modest public proﬁle afforded him the anonymity that only the hours of darkness would later come to offer him. 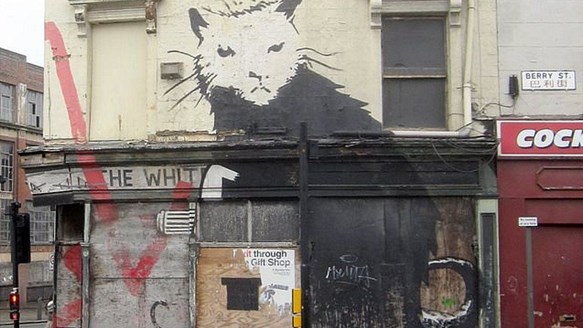 The artwork, which in its original form depicted a giant rat holding a marker pen, spanned nearly 200 square meters of a derelict Grade II listed Georgian building, which had previously housed the Whitehouse Pub in Liverpool’s Chinatown, and quickly led to the piece being referred to by the press as 'The Whitehouse Rat’. In stark contrast to the quickly played out fates of many of Banksy’s other murals, the Whitehouse Rat’s fate would take over a decade to unfold, and would take in many twists and turns on its circuitous path. The installation of the artwork was timed to coincide precisely with the September 2004 Liverpool Biennial, which Banksy spectacularly gate-crashed by painting a host of works throughout the neighbouring areas, sending a powerful message to the organisers, attendees and 41 exhibiting artists - in whose number he naturally did not feature - in more ways than one.

The Whitehouse Rat’s vast visceral impact on the local neighbourhood was both immediate and divisive. Lauded by some locals as a diverting and attractive addition to the rotting facade of an important landmark building, it was simultaneously viliﬁed by others who saw it as yet further evidence of the area’s fall into terminal disrepair. The irony of course, was that neither group at that point had a much of a grasp of who the artist was, nor that he was fast becoming an international powerhouse. By the beginning of 2008, with Banksy’s global notoriety and reputation soaring, the Whitehouse Rat’s fate began to come into sharp focus, when Liverpool embarked upon its yearlong installation as 2008 European Capital of Culture, alongside Stavanger in Norway. Liverpool City Council had earlier created a body speciﬁcally dedicated to overseeing this honour, which they called the Liverpool Culture Company, and one of the company’s ﬁrst initiatives was to reveal their top 10 ‘Grot Spots’ in Liverpool, which the Whitehouse Pub featured in. The purpose of the list was to identify the city’s most culturally compromising eyesores and to facilitate their urgent regeneration. As a consequence of this initiative, the company took immediate steps to improve the appearance of the building, which they undertook by boarding up the lower half of the artwork, which had not only deteriorated drastically, but had also seen the unfortunate theft of the rat’s marker pen, bearing Banksy’s name.

The response to the boarding up captured the attention of news editors, and it was soon featured on national television, which put Liverpool City Council under so much pressure, that they immediately removed their hoardings, and repainted the area surrounding the rat’s head, in a bid to make the building - and the ‘troublesome' artwork - more presentable to their European guests. By the end of 2008, it was clear that the owners of the building had - quite literally - an asset and a liability in the Whitehouse Rat. On the one hand, its notoriety had potentially drastically inﬂated the building’s market value, but on the other, as a listed building, the artwork constituted an unauthorised addition to the building’s fascia, which would make its regeneration a great deal more complicated and costlier to boot.

The owners of the building consequently listed it for sale, and despite a fanfare of media interest and speculation as to its ultimate value, it sold for a paltry £114,000, only then to be listed for sale once more in a local auction, where it sold to Ascot Property Management, who immediately applied for planning permission to restore the building and the artwork. Soon afterwards, the daunting reality of this undertaking became apparent to Ascot’s owners, when they established that the lower part of the artwork was completely unsalvageable, and that the top part had been painted onto the stucco plaster facade of the building, and that it was either going to need to be repaired and left in situ, or removed by a team of experts. Watching this debacle slowly unfold were Liverpool City Council, who decided to intervene and granted the owners of the building £307,000 towards the property’s restoration, which immediately sealed the Whitehouse Rat’s fate - the rat would need to be removed to allow for the building’s restoration work to commence, and so in late 2013, it was removed amidst a frenzy of media coverage. Since then there has been much speculation in the press as to the work’s whereabouts, with rumours that it had been re-homed in a newly commissioned Street Art Museum in Liverpool and then, more recently, that it had been acquired by a millionaire Qatari collector.

In 2018, it appeared in the public domain brieﬂy once more, when it was displayed at London’s fashionable 'Rat Bar’, a favourite haunt of many of the world’s most celebrated street artists. It has been in a private collection since 2017.