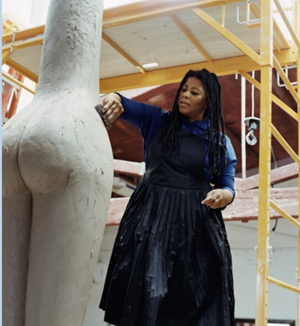 The Institute of Contemporary Art Boston (ICA/Boston) and the U.S. Department of State’s Bureau of Educational and Cultural Affairs has announced that Simone Leigh’s exhibition for the U.S. Pavilion at the 59th International Art Exhibition of La Biennale di Venezia will be titled Simone Leigh: GRITTIN.

The Institute of Contemporary Art Boston (ICA/Boston) and the U.S. Department of State’s Bureau of Educational and Cultural Affairs today announced that Simone Leigh’s exhibition for the U.S. Pavilion at the 59th International Art Exhibition of La Biennale di Venezia will be titled Simone Leigh: GRITTIN.

The exhibition’s title draws from Leigh’s continued interest in performativity and affect. Derived from the word “grit,” with its dual meanings that denote both a spirit of resolve and the material quality of sand or stone, “grittin” is an African American Vernacular English term for the act of adopting a posture of protection. The theatrical facial expressions used in the performance of grittin convey an attitude of aggressiveness toward an obstacle or adversary and these exaggerated expressions reveal the internal resolve of the person performing. In the context of Leigh’s presentation at the U.S. Pavilion, the notion of grittin signifies the performance of perseverance, stoicism, and determination suggested by many of the works in the exhibition, while also alluding to the earthen material that is central to their making.

“This will be the first time the U.S. Pavilion is entirely dedicated to the experiences and contributions of Black women,” said Jill Medvedow, 2022 U.S. Pavilion Co-Commissioner and Ellen Matilda Poss Director of the ICA. “Global in its research and references, intergenerational and collaborative in its lines of inquiry, Leigh’s exhibition will leave an indelible mark on all who visit the Pavilion.”

For the U.S. Pavilion, Leigh has created a new series of figurative sculptures in bronze and ceramic that further her commitment to highlighting the labor and resilience of Black women across global histories. Drawing upon artistic traditions from within Africa and the African diaspora, Leigh uses a strategy that she terms “the creolization of form,” merging disparate cultural languages linked through histories of colonization. With these works, Leigh weaves together references to 19th century West African art, the material culture of early Black Americans, and the colonial history of international expositions. Through her process, Leigh makes transformative works that propose new frames of reference. Venice, with its centuries-long history of trade and cultural exchange, as well its tradition of honoring artisan skill, provides an apt backdrop for Leigh’s project.

Said Eva Respini, 2022 U.S. Pavilion co-commissioner and Barbara Lee Chief Curator at the ICA: “Central to the exhibition—and to Leigh’s work at large—is an ethos of citation, wherein Leigh references the ideas, achievements, and histories of Black women’s intellectual labor. Leigh acts and imagines collectively and these ideas of collectivity point to the sharing of power, visibility, and access, while foregrounding the power of her figurative representations in the cultural sphere.”

As part of her exhibition at the U.S. Pavilion, Leigh will bring together scholars, artists, and activists from around the world for a major project, Loophole of Retreat: Venice. Organized by Rashida Bumbray, Director of Culture and Art at the Open Society Foundations, with curatorial advisors Saidiya Hartman, University Professor at Columbia University; and Tina Campt, Owen F. Walker Professor of Humanities and Modern Culture and Media, Brown University, the three-day symposium will comprise dialogue, performances, and presentations centered on Black women’s intellectual and creative labor. Taking place in Venice in Fall 2022, the gathering will feature a global roster of participants, and will spotlight performances, film screenings, and conversations organized around a few key directives including maroonage, magical realism, and medicine.

“Leigh is committed to the lineage of Black women artists and intellectuals that make her practice possible,” said Bumbray. “As such, in connection with her exhibition at the U.S. Pavilion in Venice, she continues her work of making Black women’s intellectual labor more visible. Loophole will elevate a global conversation on Black feminist thought in order to nurture the intergenerational and interdisciplinary connections between Black women thinkers and makers.”

Loophole of Retreat: Venice builds on an eponymous one-day convening held in 2019 at the Solomon R. Guggenheim Museum in New York. The conceptual frame is drawn from the 1861 autobiography of Harriet Jacobs, a formerly enslaved woman who, for seven years after her escape, lived in a crawlspace she described as a “loophole of retreat.” Jacobs claimed this site as simultaneously an enclosure and a space for enacting practices of freedom—practices of thinking, planning, writing, and imagining new forms of freedom. It is a place that Loophole of Retreat: Venice will mobilize again in centering this space for the intellectual labor of Black women and femmes.

Over the past two decades, Simone Leigh (b. 1967, Chicago, IL) has created an expansive body of work in sculpture, video, and performance that centers Black femme interiority. Inflected by Black feminist theory, Leigh’s practice intervenes imaginatively to fill gaps in the historical record by proposing new hybridities. Leigh’s sculptural works join forms derived from vernacular architecture and the female body, rendering them via materials and processes associated with the artistic traditions of Africa and the African diaspora. The collaborative ethos that characterizes Leigh’s videos and public programs pays homage to a long history of Black female collectivity, communality, and care.

The works that comprise Leigh’s exhibition for the U.S. Pavilion will be featured in her first museum survey exhibition at the ICA in 2023, which will subsequently tour to museums throughout the United States. The exhibition will be accompanied by the first comprehensive monograph dedicated to Leigh’s work.