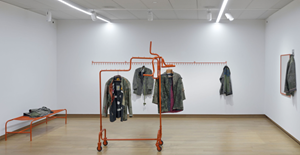 The work brings together a number of key themes that are central to her oeuvre, such as identity, performativity and network.

The Stedelijk Museum Amsterdam acquires Coats to Borrow (1989) by Ana Lupas with support from the Mondriaan Fund. The work brings together a number of key themes that are central to her oeuvre, such as identity, performativity and network. The installation also holds special significance within the cultural-historical context of Europe, as it marks the period around the fall of the Berlin Wall. Lupas made the installation in Romania in 1989, the last year of Nicolae Ceausescu’s communist regime. As Ana Lupas herself says, the work is an “act of resistance.”

The installation consists of six coats handmade by the artist, which hang and lie on orange-painted metal furniture, such as a garment rack on wheels, a bed and a mirror. Lupas made the six coats from old items of clothing and textiles and circulated them within her group of acquaintances. The coats were also passed from one friend to another in cities across Romania, and everyone was asked to write or sew their name on a label on the inside of the coat. The ensemble of garments with names (which are not visible on the outside) is the result of the social relationships of a group of makers who were unable to protest publicly because of the oppressive communist regime. Speaking of the installation, Lupas says, “The work is a sort of conspiracy.”

Ana Lupas began making Coats to Borrow in January 1989. At that time she intended that the coats would continue to circulate as long as Ceausescu’s regime was in power. She could not have suspected at the time that the communist dictatorship would fall before the end of that year. This explains why some coats have a great many labels, and others have only a label with the name of the artist, who also wore all the coats herself. This form of ‘performative sculpture’ – an installation centered on the actions of a group of people, a collective – is characteristic of Ana Lupas’ body of work.

Ana Lupas (born in Cluj-Napoca, Romania 1940; lives and works in Cluj-Napoca) is one of the foremost artists from (former) Eastern Europe. In the Netherlands, however, she is still relatively unknown to the general public. In the 1960s Lupas began making textile works, happenings and monumental installations, which were in line with the land art and post-minimal art of the time. Lupas was a major influence on a young generation of artists in Romania in the 1970s and 1980s, due in part to the exhibitions she organized with the avant-garde collective she founded, Atelier 35. In recent years, her contribution to contemporary art has gained international recognition and her work has been acquired by museums such as Tate Modern, Centre Pompidou, Museion Bolzano, Kunstmuseum Liechtenstein, Erste Foundation Vienna and by international private collectors.