The Rijksmuseum Receives €300,000 for Research into Women in its Collection 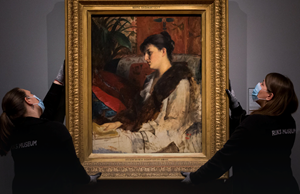 “In History and in art, women continue to be the exception to the rule. The role of women has in fact been far greater than acknowledged or described until now. The generous support from private benefactors and the creation of the fund will enable us to conduct research inti this area and add new stories to correct distorted perceptions,” said Hendrikje Crebolder, Director Development & Media.

Jenny Reynaerts, senior curator paintings and chair of the research programme, plans to use this research to provide answers to questions such as: How many female artists are represented in the collection? ‘The Rijksmuseum has already identified the female artists of paintings and sculptures in its collection, but still has to do the same for the hundreds of thousands of works on paper and crafted objects. Another question: What is the identity of the women portrayed in the art, and what part did they play in Dutch history? Women are still often described in terms of being ‘the wife of’, for example.’ We will also be conducting a thorough investigation into the origins of the Rijksmuseum collection and the history of the museum itself to identify the female collectors, patrons, benefactors and staff members involved. The outcomes of these research activities will include the enhancement of the information provided in the galleries and online, new acquisitions, exhibitions, symposiums and a book.

The Rijksmuseum will be adding the newly discovered stories throughout the research period. Take for example the painting by Catharina van Hemessen, one of the earliest known female painters, which has been restored over the past months so it can be incorporated in the permanent display. The Rijksmuseum also recently acquired new works such as the 1933 self-portrait by Charley Toorop and a set of bronze chess pieces made in 1923-25 by Saar de Swart, the sculptor and major patron of the late-19th century Dutch literary movement De Tachtigers. The Rijksmuseum Schiphol exhibition Female Power, which runs until 22 November 2022, is devoted to strong women in history such as biblical heroine Judith and artist Rachel Ruysch. 8 March 2022 will see the launch on the Rijksmuseum Stories platform of a series about important women in the Rijksmuseum collection with Cathelijne Blok, creative director of The TittyMag.

A variety of experts in the area of female cultural history will speak at the international symposium Women in the Museum: Best Practices on 8 March 2022. The topics covered will include ‘women in the art world’, ‘the female perspective on museum objects’ and ‘blind spots in feminist art history’. Speakers include Jolande Withuis (writer, sociologist and feminist) who will talk about the biography of Jeanne Bieruma Oosting, and Denise Murrell (curator at The Metropolitan Museum, New York, and of the Black Models exhibition at Musée D’Orsay) who will discuss black female artists and models in the period around 1900. Those interested in attending the symposium can do so live in the Rijksmuseum or online.