The Phillips Collection Presents an Installation in Solidarity with Ukraine 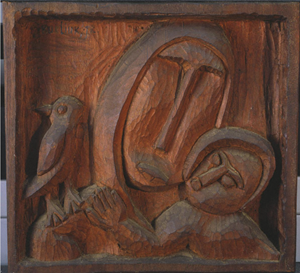 During this time of violent attacks against Ukraine, the Phillips wishes to express solidarity with Ukraine by paying tribute to influential artists of Ukrainian ancestry in the museum’s collection.

During this time of violent attacks against Ukraine, the Phillips wishes to express solidarity with Ukraine by paying tribute to influential artists of Ukrainian ancestry in the museum’s collection. In the Goh Annex Stairwell are five works by four Ukrainian-born artists: contemporaries Alexander Archipenko (b. Kyiv, 1887), John Graham (b. Kyiv, 1887), and David Burliuk (b. Kharkiv, 1882); and Burliuk’s son, David Burliuk, Jr. (b. Tchernianka, near Kherson, 1913).

In the 1920s, Archipenko, Graham, and Burliuk and his family fled Russia after the Russian Revolution and settled in the United States, where they became leaders in international vanguard art circles. Their innovative work came to the attention of collectors, such as Société Anonyme founder Katherine Dreier and Phillips Collection founder Duncan Phillips.

The Phillips Collection acquired in-depth holdings of work by Graham and Burliuk, giving each their first solo museum exhibition in 1929 and 1939, respectively. In 1953, Archipenko entered the collection.
Through their active careers in the United States, Archipenko, Burliuk, and Graham became catalysts in cross-cultural exchanges that fueled the course of 20th-century art.