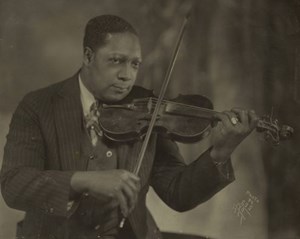 The Metropolitan Museum of Art, The Studio Museum in Harlem, and Mrs. Donna Van Der Zee jointly announced today the establishment of the James Van Der Zee Archive at The Met, a landmark collaborative initiative to research, conserve, and provide full public access to the remarkable catalogue of photographs by James Van Der Zee (1886–1983).

The Metropolitan Museum of Art, The Studio Museum in Harlem, and Mrs. Donna Van Der Zee jointly announced today the establishment of the James Van Der Zee Archive at The Met, a landmark collaborative initiative to research, conserve, and provide full public access to the remarkable catalogue of photographs by James Van Der Zee (1886–1983). The world-renowned chronicler of Black life in New York City during the Harlem Renaissance and for decades thereafter, Van Der Zee was a virtuoso portraitist and one of the most celebrated artists of the 20th century. The archive will comprise approximately 20,000 prints made in his lifetime, 30,000 negatives, studio equipment, and ephemera. The James Van Der Zee Archive is the third archive of an American photographer to be acquired by The Met—preceded by the archives of Walker Evans and Diane Arbus, which were acquired by the Museum in 1994 and 2007, respectively—and its first collaboration with a partner institution to safeguard the legacy of an individual artist.

For the last 40 years, Mrs. Van Der Zee, widow of James Van Der Zee, and the Studio Museum have cared for the materials comprising the archive. Were it not for their dedicated custodianship, the vast collection—one of the largest holdings of any photographer’s work in the world—would not have been saved for posterity. With the support of Mrs. Van Der Zee and through its educational and public initiatives, including the program for young photographers “Expanding the Walls: Making Connections Between Photography, History, and Community,” the Studio Museum has introduced generations of new audiences to Van Der Zee’s work, ensuring his cultural legacy. In recent years, the annual “Expanding the Walls” exhibition has been presented in The Met’s Ruth and Harold D. Uris Center for Education.

The complex effort to establish the archive was initiated by Mrs. Van Der Zee in the summer of 2018, and collaboratively managed by her with Thelma Golden, Director and Chief Curator of the Studio Museum, and Jeff L. Rosenheim, The Met’s Joyce Frank Menschel Curator in Charge of the Department of Photographs. The Metropolitan Museum of Art will assume the role of copyright holder for all works by James Van Der Zee in all media, and will conserve, maintain, and store the negatives. The items constituting the archive come from three sources: the collection of Donna Van Der Zee; the holdings of The Studio Museum in Harlem; and the James Van Der Zee Institute, which has been inactive since the 1980s.

Mrs. Van Der Zee noted: “I am so very pleased for this next chapter of my late husband’s archive. For most of his years, Van lived and worked in New York, and it was The Met that presented the very first exhibition of his photography, introducing him to the wider world. Given this, it is especially fitting that the James Van Der Zee Archive should find its permanent home at The Met and in a way that the Studio Museum is a partner. As the steward of Van’s work for the past 40 years, I feel it is a great honor and responsibility to ensure the collection is placed in a way that guarantees the depth, breadth, and innovative artistry of Van’s photography is appreciated, and the archive receives the care, scholarship, and attention it requires. That The Met’s acquisition will allow the public to witness, learn from, and be moved by the beauty and diversity captured in Van’s photographs gives me tremendous joy. The collection has found an ideal permanent home.”

Thelma Golden concurred: “This innovative partnership between The Studio Museum in Harlem and The Met at last brings all the complex and varied materials of the James Van Der Zee Archive under one roof, where the technical challenges of conservation and digitization will be expertly managed, and our ongoing work in advancing knowledge of Van Der Zee will be supported and amplified by a great partner. We are extremely pleased to be able to collaborate with Mrs. Van Der Zee and The Met on creating a permanent home for one of the nation’s most important picture makers.”

Max Hollein, Marina Kellen French Director of The Met, said, “The Met has been collecting James Van Der Zee’s photographs for more than 50 years and already holds an important collection of his work. By taking on the stewardship of his archive, the Museum is honored to partner with Mrs. Van Der Zee and The Studio Museum in Harlem to conserve and share Van Der Zee’s photographs with our large audiences both here in New York and around the world. The Met currently preserves the complete archives of two other American photographers—Walker Evans and Diane Arbus—and it is an immense privilege to bring to the Museum the archive of a third American artist with this extraordinary collection of intimate, life-affirming portraits and views.”

Over the next several years, The Met will be working in partnership with the Studio Museum and Mrs. Van Der Zee, and alongside a diverse team of historians, curators, registrars, and conservators, to fully research, archive, catalogue, conserve, and digitize the entire archive to make it fully available to the public.

James Van Der Zee was a highly inventive artist who lived and operated a portrait studio in Harlem for half a century beginning in the mid-1910s. His long career spanned some 80 years, from his earliest work documenting his extended family at their home in Lenox, Massachusetts, when he was a teenager, to his portraits in the 1980s of Romare Bearden, Ruby Dee and Ossie Davis, Benny Andrews, and Jean-Michel Basquiat, among other artists. In 1970, after his star turn in The Met’s controversial Harlem on My Mind exhibition, Van Der Zee was made a “Fellow for Life” at the Museum, a tribute to his extremely generous donation of 66 photographs. In 1978, he received the Pierre Toussaint Award from the Archdiocese of New York, and the following year, at the White House, President Jimmy Carter presented to Van Der Zee the Living Legacy Award. A highly lauded photographer with four honorary doctorate degrees, Van Der Zee died in 1983 at the age of 96.

Van Der Zee was the son of parents who had worked as a maid and butler in the home of President Ulysses S. Grant. He received a classical education encompassing music and visual art, and excelled in both disciplines. In 1900, at age 14, he purchased a camera and began his illustrious career. As the art historian Deborah Willis wrote in her 1993 catalogue for his posthumous exhibition at the National Portrait Gallery, Van Der Zee: Photographer, 1886–1983: “James Van Der Zee was tireless in devising ways to use composition, image manipulation, props, and staged studio setups to establish a space in which his subjects could expand spiritually, emotionally, and symbolically...It is this transformative power in his work that made Van Der Zee a model of the visionary and optimistic early-twentieth century American photographer.”

The James Van Der Zee Archive will be an important repository of New York art and history that features cosmopolitan portraits of Black families marking life’s many milestones from birth to death: young children with their parents; adolescents alone and posed with their peer groups; baptisms, communions, confirmations, and school graduations; military service members before, during, and after the two World Wars; brides, grooms, and their entourages; sports teams, social clubs, and literary salons; musicians, dancers, and blues singers; and nurses, surveyors, optometrists, and beauticians. These studio portraits will be seen alongside the artist’s celebrated funerary tableaux of the dead in their caskets; this fascinating body of work appears in the artist’s third monograph, The Harlem Book of the Dead (1978), which includes a foreword by the novelist Toni Morrison.

The archive also includes portraits of notable Black luminaries such as Mamie Smith; Adam Clayton Powell, Sr.; Florence Mills; Father Divine; Daddy Grace; and Muhammad Ali, as well as important and exceptionally rare photographs of Marcus Garvey and the rallies for his United Negro Improvement Association (UNIA). It includes street scenes of Harlem parades during and after both World Wars, church cornerstone ceremonies, and even neighborhood school kids informally mugging for the camera on the street in front of the artist’s photography studio. Bringing these portraits and views to light through careful preservation and long-term collaborative scholarship will confirm James Van Der Zee’s special place as an American master in the history of photography.