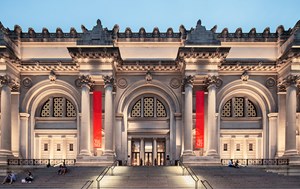 With this largest capital gift in Met history, longtime Trustee and his wife enable the renovation of the Modern Wing, which will be named the Oscar L. Tang and H.M. Agnes Hsu-Tang Wing.

The Metropolitan Museum of Art announced that Oscar Tang and Agnes Hsu-Tang have pledged $125 million to fund the renovation of the Museum’s Modern Wing. This is the largest capital gift ever to The Met and follows Oscar Tang’s nearly 30 years of service and leadership as a Trustee, as well as his extraordinary generosity in endowing curatorial positions, funding new and expanded galleries, and providing exceptional gifts of art. With this gift, The Met moves forward with a re-envisioning of the presentation of modern and contemporary art within the Museum, creating 80,000 square feet of galleries and public space named the Oscar L. Tang and H.M. Agnes Hsu-Tang Wing.

“With this remarkable gift, Oscar and Agnes are enabling The Met to realize its ambitious mission for future generations,” said Daniel H. Weiss, President and CEO. “Their generosity—while breathtaking in its scope and vision—is no surprise, as it is an extension of their decades-long support of our Museum. Indeed, for 151 years, The Met’s foundation was built precisely in this fashion—from the support of extraordinary individuals who have the vision and passion to make it possible for all New Yorkers, as well as visitors from around the world, to experience art from across 5,000 years of human history.”

The Modern Wing will encompass a full renovation of the current modern and contemporary galleries, which The Met has been seeking to renovate for more than a decade. Upon his arrival in 2018, Max Hollein, Marina Kellen French Director of The Met, began a comprehensive review of planning for the Museum’s modern and contemporary art galleries. The newly revised direction reflects the Museum’s updated curatorial direction, which embraces interdisciplinary work among the Museum’s 17 curatorial departments. The architecture firm will be selected by a committee of Museum leaders and Trustees by winter 2022.

Said Hollein: “The accomplishments and generosity of Oscar and Agnes are awe-inspiring. It is an honor to build a program in a space named for them, especially one that will enable a lively celebration and reevaluation of modern and contemporary art and cultures in the context of The Met collection. The reimagining of these galleries will allow the Museum to approach 20th- and 21st-century art from a global, encyclopedic, bold, and surprising perspective—all values that reflect the legacy of Oscar and Agnes.”

A Trustee Emeritus and Benefactor of The Met, Mr. Tang, even preceding this gift, has been one of the most generous supporters in the Museum’s history. As activist collectors—Tang, a longtime Chair of The Met’s Asian Art Visiting Committee, and Hsu-Tang, a member of the Modern and Contemporary Visiting Committee—they endeavor to safeguard art as cultural heritage. They have generously provided gifts and promised gifts of art and supported acquisitions, special exhibitions, general operating needs, and galleries. Tang has previously endowed the Frances Young Tang Gallery to commemorate his late wife and the Wen Fong Study Room in honor of his brother-in-law, a former Chair of the Department of Asian Art. Highlights among Tang’s earlier gifts of art include 20 important Chinese paintings from the 11th to the 18th century and the iconic 10th-century Song dynasty masterpiece, Riverbank.

Oscar Tang said: “As a young boy, I was displaced by war and America gave me refuge and the education and opportunities to succeed. I joined The Met’s board almost 30 years ago and I wanted to share the richness of my Chinese heritage with America and the world.” Together, the Tangs said: “Having witnessed the turbulent times that many continue to endure, we find The Metropolitan Museum of Art to be an exemplary guardian and presenter of artistic heritages across cultures and time. Contemporary art transcends entrenched notions of borders and identities and documents histories of the present. As Americans of Chinese heritage, we are honored to bestow this gift to galvanize progress—for The Met, for New York, and for the country to which we belong.”

Oscar L. Tang co-founded the asset management firm Reich & Tang in 1970 in New York. Born in Shanghai, Tang was sent to America for schooling at age 11, after his family fled from China to Hong Kong during the Communist revolution in 1948. He went on to attend Phillips Academy Andover, Yale College, and Harvard Business School—becoming the third generation in his family to be educated in the United States. In 1873, Tang’s maternal grandfather was one of 120 boys sent by the Qing court to study in America as part of the Chinese Educational Mission and the first Chinese to be documented in the Northampton, Massachusetts, census; he later became a senior foreign service official after returning to China. Tang’s father was a Boxer Indemnity Scholar; he graduated from the Massachusetts Institute of Technology in 1923 and was a business and civic leader in Shanghai and Hong Kong. In the wake of June 4, 1989, Tang, with I.M. Pei, Yo Yo Ma, and others, established the Committee of 100, a Chinese-American leadership organization for advancing dialogues between the United States and Greater China.

In 1994, Tang was the first American of Asian descent to join The Met’s Board of Trustees, and this gift constitutes the largest philanthropic gift to the Museum in a donor’s lifetime. His previous philanthropy includes the largest institutional gifts to Phillips Academy Andover, where he served as Board President, and the New York Philharmonic, of which he is Board Co-Chair. The Tangs have given important gifts to establish academic centers for Asian humanities to Princeton University, Columbia University, the University of California at Berkeley, and the University of Oxford, as well as support for social justice and humanitarian causes. In early 2021, they founded The Yellow Whistle campaign to combat anti-Asian violence and have disseminated 500,000 free yellow whistles emblazoned with the slogan “We Belong” at rallies and through a national alliance of 200 activist groups.

Agnes Hsu-Tang, Ph.D., is an archaeologist and art historian. A former Mellon Fellow at Cambridge University and Stanford University, she has authored academic publications and white papers, and advised UNESCO in Paris and President Obama’s Cultural Property Advisory Committee. She served under the late U.S. Ambassador James Lilley and has worked on cultural heritage protection and rescue since 2006. Hsu-Tang is a descendant of Paolo K.C. Hsu, the late 16th-century Catholic Ming Dynasty imperial minister and statesman who, with Matteo Ricci, engaged in the first cross-cultural exchanges and translations of scientific and philosophical texts in Classical Chinese and Latin, for which he has been beatified by the Vatican.

Hsu-Tang is Board Chair-Elect of the New-York Historical Society and has chaired its Exhibitions Committee since 2015. As a Managing Director on the Met Opera board from 2014 to July 2021, she served on the Oversight Committee and was Chair of the Nominating Committee.  She is a senior research scholar at Columbia University and a Distinguished Consulting Scholar at the University of Pennsylvania Museum of Archaeology and Anthropology.