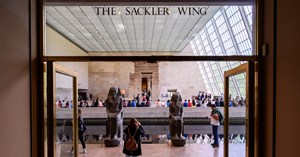 The Metropolitan Museum of Art and descendants of the late Dr. Mortimer Sackler and Dr. Raymond Sackler have announced that seven named exhibition spaces in the Museum will no longer carry the Sackler name.

In the wake of growing outrage over the role the Sacklers may have played in the opioid crisis, the Metropolitan Museum of Art and the Sackler family jointly announced that the Sackler name would be removed from seven exhibition spaces, including the iconic Temple of Dendur. The Museum and the families of Dr. Mortimer Sackler and Dr. Raymond Sackler have mutually agreed to take this action in order to allow The Met to further its core mission.

“Our families have always strongly supported The Met, and we believe this to be in the best interest of the Museum and the important mission that it serves,” descendants of Dr. Mortimer Sackler and Dr. Raymond Sackler said in a statement. “The earliest of these gifts were made almost fifty years ago, and now we are passing the torch to others who might wish to step forward to support the Museum.”

“The Met has been built by the philanthropy of generations of donors – and the Sacklers have been among our most generous supporters,” said Dan Weiss, President and CEO of The Met. “This gracious gesture by the Sacklers aids the Museum in continuing to serve this and future generations. We greatly appreciate it.”