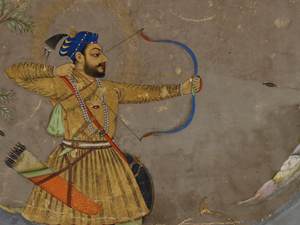 The Metropolitan Museum of Art has acquired 84 works from the Howard Hodgkin Indian Collection, which is widely regarded as one of the finest of its kind.

The Metropolitan Museum of Art has acquired 84 works from the Howard Hodgkin Indian Collection, which is widely regarded as one of the finest of its kind. Highlights of the acquisition include three pages from the early Mughal Hamzanama series; portraits of Mughal, Rajput, and Pahari courtly rulers; mythological and devotional subjects; celebrations of the hunt; and studies of nature and wildlife with a particular focus on elephants. The newly acquired works will be displayed at The Met in 2024 alongside the 38 works that remain in The Howard Hodgkin Indian Collection Trust, which will be loaned to the Museum.

Max Hollein, Marina Kellen French Director of The Met, commented, “Howard Hodgkin’s collection represents an artist’s eye for great beauty and reflects his passion for an extraordinarily broad range of Indian painting, which he gathered into a stunning group of works. We’re thrilled to display these works within the context of Howard’s entire collection, thanks to the additional loan from his trust.”

Randhir Jaiswal, Consul General of India in New York, said: “We warmly welcome the Howard Hodgkin Collection to The Met—an institution with deep and engaging ties with India. This special bond has been nurtured through its rich and varied collection of Indian art and heritage, and the conversations that have happened over decades. With the Howard Hodgkin Collection coming to The Met, a new chapter is being written in this ever-flowing cultural engagement. What makes this acquisition even more special is that it is happening at a time when India celebrates 75 years of its independence and democracy. I am sure visitors to the Museum are going to enjoy the collection and enrich their understanding of India, its people, and their history.”

Antony Peattie, Trustee of The Howard Hodgkin Indian Collection Trust, said: “We are delighted that The Metropolitan Museum of Art has acquired a magnificent selection of works from Howard’s collection and that the whole collection will be kept together at the Museum as Howard wished."

The newly acquired works will be housed within the Departments of Asian Art and Islamic Art. The Met’s collection of South Asian art—with sculpture, painting, textiles, photographs, and various other media from 2500 B.C. to modern times—is one of the most comprehensive in the West, allowing it to document the full expanse of the rich cultural heritage of the Indian sub-continent. The Museum began collecting works from the region in 1891.

Additionally, Hodgkin’s own painting Small Indian Sky (1990) has been gifted to The Met and will be on view with the Hodgkin collection.

About the Howard Hodgkin Indian Collection

Howard Hodgkin’s collection of Indian paintings and drawings was formed over sixty years and has been recognized as one of the finest of its kind, previously shown at the Ashmolean Museum, Oxford and toured to the Arthur M Sackler and Freer Gallery, the Smithsonian, Washington D.C.; the Museum Rietberg, Zurich; the Sainsbury Centre, University of East Anglia; the British Museum, London and the Museo del Castelvecchio, Verona. Individual works have been exhibited in numerous international exhibitions, including The Met’s 2011 Wonder of the Age exhibition.

The Collection comprises 122 works, from the Mughal, Deccani, Rajput and Pahari courts. Formed independently of academic interests in topography, period or style, it reflects an artist’s passion for great art. Hodgkin once said that what drew him to Indian art was its ‘sense of nearness, of nakedness, of tangible reality.’

Sir Howard Hodgkin CH CBE (1932–2017) was an internationally acclaimed British painter and printmaker, whose work enthused the general public as much as the art world. Unwilling to be considered an abstract artist he once said that he painted representations of emotional situations.

He found in Indian art ‘a world elsewhere’, an autonomous, independent way of looking and representing the world that moved and excited and inspired him. He longed to enthuse others with his passion. ‘For an artist there are elements of scale, form and color that are beyond verbal description. In Indian painting I have found much that could be found nowhere else, but I cannot tell you what – I can only metaphorically wave my arms at the pictures – and say look!’