The Holburne Museum Presents New Works by Artists and Their Children in ‘My Kid Could’ve Done That!’ 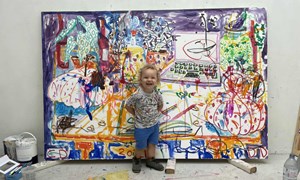 The Holburne Museum, Bath, is staging an exhibition of brand-new work by fifteen contemporary artists and their children, which invites art lovers to determine just who created the work on display.

The Holburne Museum is bravely staging an exhibition of brand-new work by fifteen contemporary artists and their children, which then invites art lovers to determine just who created the work on display?

The Museum’s Contemporary Art Curator Will Cooper came up with the show’s concept after working from home for much of the past year, where, like many other parents across the UK, he found himself doing more creative things with his family. Indeed, his co-curator for the show is Astrid, his five-year-old daughter – who also insisted that one of her drawings be included.

The exhibition will be staged at The Edge arts centre at the University of Bath, which has recently embarked on a partnership with the Holburne Museum.

While this will be a fun and experimental exhibition, Will believes that visitors will also understand how it taps into exploring themes such as the relationship between being a parent and a worker. Moreover, it reveals much about how life under lockdown changed for UK families and shares the experiences of parents juggling a wholly rearranged version of their normal work-life balance.

“Many of the works will share how joyous parenting can be, but this will be offset by the repetition, banality and challenges that all parents know so much about,” explains Will.

Via a series of Zoom studio visits, Will and Astrid have persuaded 15 contemporary artists and their children to take part in the project. They include Harriet Bowman and her son Len, who will be making large scale wallpaper, taking up the entire back wall of the gallery. While painter Dickon Drury and Cosmo, are drawing together and starting a new large work on canvas. Similarly, France Lise McGurn and Rita are working on some big collaborative paintings. Kate Owens and her daughter Trudy are merging Kate’s printmaking practice with Trudy’s love of mazes.

Other artists participating in the exhibition are Ryan Gander and his children; Emily Speed and Wilbur; Jasleen Kaur and Rai; Kenneth Alme and Heine; Tessa Lynch and Alva; Joanne Masding with Felix; Yu-Chen Wang in collaboration with her partner Andro Semeiko and their daughter Lilly;  Lilah Fowler and Reia, Sara Barker and Seb, along with Sean Edwards and his young family.

As can be expected, many of the artworks promise to be quite extraordinary. In the case of Yu-Chen, Andro and Lilly, they are planning a large installation featuring audio and a game, reflecting that 10-year-old Lilly is fluent in three languages and flits between her mother’s Taiwanese, father’s Georgian and English.

Reflecting their own heritage, Jasleen Kaur and her son Rai, have hinted that their contribution could include samosa sculptures. Bristol-based artist Natasha MacVoy had twins a decade ago, which prompted her to relocate her practice to her home, rather than rent a studio in the city. Consequently, the boundaries between home and workplace became blurred, because for Natasha and her fellow contributors to ‘My Kid Could’ve Done That!’ there simply isn’t a boundary.

In fact, the entire making process is an ongoing conversation between the artists and their families, which means that the final content of the show might not be known until the very last minute, as Will explains: “Much of what will appear in the exhibition will depend on what parents respond to when making with their kids. Every studio visit I’ve made so far has had some version of the same conversation – ‘my kid is into making this at the moment’. That’s likely to change between now and when the show opens, so it will be fascinating to see the results.”

He adds: “Another recurring theme is how artists are approaching collaborating with their children, so the resulting work isn’t by one or the other, nor is it too child or parent-led. You never know, we might have kids visiting the exhibition and exclaiming ‘My mum or dad could’ve done that!’”