The Curatorial Project of the 35th Bienal de São Paulo 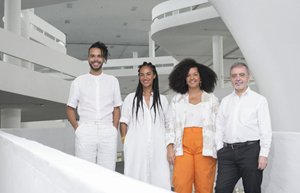 The Fundação Bienal releases the first curatorial text written by Diane Lima, Grada Kilomba, Hélio Menezes and Manuel Borja-Villel announcing the title and theme of the 35th Bienal de São Paulo – choreographies of the impossible, which will take place from September to December 2023.

The Fundação Bienal releases the first curatorial text written by Diane Lima, Grada Kilomba, Hélio Menezes and Manuel Borja-Villel announcing the title and theme of the 35th Bienal de São Paulo – choreographies of the impossible, which will take place from September to December 2023. The text introduces the key concepts and movements of the next Bienal de São Paulo, the biggest contemporary art exhibition of the southern hemisphere and the second oldest in the world after the Venice Biennale.

The idea of forming a group with a horizontal structure without the figure of a chief curator was suggested by the team of curators and will be central to their project for the 35th Bienal. Diane Lima is an independent curator, writer and researcher; Grada Kilomba, an interdisciplinary artist, writer and academic; Hélio Menezes is a curator, anthropologist and researcher; and Manuel Borja-Villel is a researcher, art historian and director of the Reina Sofia Museum in Madrid.

How can bodies in movement be able to choreograph the possible, within the impossible? The proposal for the 35th Bienal de São Paulo emerges as a mutual project around multiple possibilities to choreograph the impossible. As the title already suggests, it is an invitation to radical imaginations about the unknown, or even about what figures as im/possible.

We employ the term choreography to highlight the practice of drawing sequences of movements across time and space, generating multiple and new fractions, forms, images and possibilities, despite all the infeasibility and denial. We are interested in the rhythms, tools, strategies, and technologies, as well as in all symbolic, economic and juridical procedures that extra-disciplinary knowledges are able to promote, producing thus the flight, the refusal and their poetic exercises.

Here we present the impossible indefinitely, for we comprehend that its generative violence also goes beyond what we can imagine. They are often immeasurable, indescribable and unimaginable. We are concerned, therefore, about describing, without reenacting.

And so the choreography rehearsal begins.

As a curatorial proposal, choreographies of the impossible enunciates a space of experimentation – open to the dances of the unimaginable – that embodies movements capable of transforming what is apparently non-existent into existent. This idea of a choreography is based on the enigmatic nature of the artistic fact and, thus, on everything that is neither worn out nor evident, but rather on what can be named as secret, mystery or as the infinite itself. These are resilient elements, and therefore elements of rupture, of an attempt at freedom, consequently.

The curatorial team (in alphabetical order) is composed of Diane Lima, Grada Kilomba, Hélio Menezes and Manuel Borja-Villel. Our team is a collective, acting horizontally, in a counter-dance. For us, the choreographies begin with our practice, whose principle is the attempt to dismantle hierarchies, ethical and normative procedures that enact the institutional devices' vertical power, value and violence structures – which, as we all know, the world no longer supports.

Where are these choreographies? How to look at them? And how do they collapse the aesthetical categories of modern thought, creating a fractal image into which the political, the historical, the organic, the physical and the spiritual unite? When and how do work, frequency, heat, sound capacity and matter become parts of this choreography? And how to create new movements, changing the speed and the dimensions of time: how to defer, accelerate or even stop it?

This first moment begins like a rehearsal, a rehearsal of movements dedicated to writing and erasing words, terms and concepts, which produce a constellation of thoughts and actions in order to find them. This rehearsal has to do with the gestures of deepening, acknowledging, collapsing, and bringing together the theoretical frameworks, symbolic references, and aesthetical repertoires that conform the very collectivity we are. And, more importantly, these gestures echo the resonances of the collectivity that goes beyond us and expands with the dialogues we have been having with other thinkers, artists, researchers, activists, curators, and poets.

We understand this moment as the first choreography of our curatorial project. It is the singularity of this essay, which strays between borders, that will allow us to unfold the 35th Bienal de São Paulo’s networks in an extra-disciplinary and extra-institutional way. Right now, the central question is: would it be possible to bring forth networks that transcend an expansive spatial movement while, conversely, having as their starting points the gestures of listening, bringing forth redistribution policies, and caring towards people, spaces, and territories, all of which are themselves the very choreographies of the im/possible that inhabit institutional limits?

Inspired by non-linear and non-progressive perceptions of time, the 35th Bienal de São Paulo proposes also a reflection on how different registers of temporality can engender other modes of producing, feeling, exposing and relating to artistic practices. Spiraling, fractal, bent time(s); cadences that move bodies, dilate and contract spaces, and thus do not fit in chronologies or sequences. This immeasurable set of possibilities of living time is the core of our curatorial interest.

This is the spiraling movement we propose, the development of the performative and gradative character of curatorial and artistic processes. Let us say that this Bienal is about creating what is possible in a world ruled by impossibilities. This is our choreographic drawing.