The Broad Museum, Los Angeles Presents “This is Not America’s Flag” – A Group Exhibition 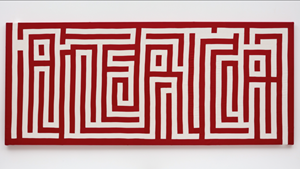 Featuring over twenty artists, the special exhibition “This Is Not America’s Flag” spotlights the myriad ways artists explore the symbol of the flag of the United States of America, underscoring its vast, divergent, and complex meanings.

Featuring over twenty artists, the special exhibition “This Is Not America’s Flag” spotlights the myriad ways artists explore the symbol of the flag of the United States of America, underscoring its vast, divergent, and complex meanings.

Titled after Alfredo Jaar’s iconic 1987 work, A Logo for America, “This Is Not America’s Flag” provides a critical discourse on the symbol’s meaning, the complexity and contradictions of contemporary national identity, and artists as active citizens.

The exhibition was developed conceptually in the summer of 2020 during the groundswell of activism for racial justice in the wake of the murders of George Floyd, Ahmaud Arbery, and Breonna Taylor and was inspired by two works in the Broad collection, Flag (1967) by Jasper Johns and African-American Flag (1990) by David Hammons.

“This Is Not America’s Flag” presents works from over twenty artists including Laura Aguilar, Nicole Eisenman, Jeffrey Gibson, Jaar, and Johns, as well as African-American Flag (1990) by Hammons acquired by The Broad in 2019 and America (2021) by Hank Willis Thomas acquired last year. The exhibition includes works that both embrace the flag as the signifier of the nation and its ideals and subvert it to express injustices and inequities woven into the fabric of the U.S., past and present.