The 59th International Art Exhibition Opens in April at the Giardini and the Arsenale, Venice 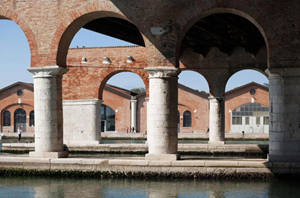 The 59th International Art Exhibition, titled The Milk of Dreams and curated by Cecilia Alemani, is organised by La Biennale di Venezia chaired by Roberto Cicutto. The pre-opening will take place on April 20, 21 and 22; the awards ceremony and inauguration will be held on 23 April 2022.

The 59th International Art Exhibition of La Biennale di Venezia, titled The Milk of Dreams, will open to the public from Saturday April 23 to Sunday November 27, 2022, at the Giardini and the Arsenale; it will be curated by Cecilia Alemani and organised by La Biennale di Venezia chaired by Roberto Cicutto. The pre-opening will take place on April 20, 21 and 22; the awards ceremony and inauguration will be held on 23 April 2022.

In 2021, La Biennale di Venezia launched a plan to reconsider all of its activities in light of recognized and consolidated principles of environmental sustainability. For the year 2022, the goal is to extend the achievement of “carbon neutrality” certification, which was obtained in 2021 for the 78th Venice International Film Festival, to all of La Biennale’s scheduled activities, which include the 59th International Art Exhibition, the Theatre, Music and Dance Festivals and the 79th Venice International Film Festival.

The Exhibition will take place in the Central Pavilion (Giardini) and in the Arsenale, including 213 artists from 58 countries; 180 of these are participating for the first time in the International Exhibition. 1433 the works and objects on display, 80 new projects are conceived specifically for the Biennale Arte.

“The Milk of Dreams takes its title from a book by Leonora Carrington (1917–2011) - Cecilia Alemani stated - in which the Surrealist artist describes a magical world where life is constantly re-envisioned through the prism of the imagination. It is a world where everyone can change, be transformed, become something or someone else. The exhibition The Milk of Dreams takes Leonora Carrington’s otherworldly creatures, along with other figures of transformation, as companions on an imaginary journey through the metamorphoses of bodies and definitions of the human.

This exhibition is grounded in many conversations with artists held in the last few years. The questions that kept emerging from these dialogues seem to capture this moment in history when the very survival of the species is threatened, but also to sum up many other inquiries that pervade the sciences, arts, and myths of our time. How is the definition of the human changing? What constitutes life, and what differentiates plant and animal, human and non-human? What are our responsibilities towards the planet, other people, and other life forms? And what would life look like without us?

These are some of the guiding questions for this edition of the Biennale Arte, which focuses on three thematic areas in particular: the representation of bodies and their metamorphoses; the relationship between individuals and technologies; the connection between bodies and the Earth.”

“As visitors move through the exhibition in the Central Pavilion and the Corderie, they encounter five smaller, historical sections: miniature constellations of artworks, found objects, and documents, clustered together to explore certain key themes. Conceived like time capsules, these shows within the show provide additional tools of investigation and introspection, weaving a web of references and echoes that link artworks of the past – including major museum loans and unconventional selections – to the pieces by contemporary artists in the surrounding space. This wide-ranging, transhistorical approach traces kinships and affinities between artistic methods and practices, even across generations, to create new layers of meaning and bridge present and past. What emerges is a historical narrative that is not built around systems of direct inheritance or conflict, but around forms of symbiosis, solidarity, and sisterhood.”

“The Milk of Dreams was conceived and organised in a period of enormous instability and uncertainty, since its development coincided with the outbreak and spread of the Covid-19 pandemic. La Biennale di Venezia was forced to postpone this edition by one year, an event that had only occurred during the two World Wars since 1895. So the very fact that this exhibition can open is somewhat extraordinary: its inauguration is not exactly the symbol of a return to normal life, but rather the outcome of a collective effort that seems almost miraculous. During these endless months in front of the screen, I have pondered the question of what role the International Art Exhibition should play at this historical juncture, and the simplest, most sincere answer I could find is that the Biennale sums up all the things we have so sorely missed in the last two years: the freedom to meet people from all over the world, the possibility of travel, the joy of spending time together, the practice of difference, translation, incomprehension, and communion.

The Milk of Dreams is not an exhibition about the pandemic, but it inevitably registers the upheavals of our era. In times like this, as the history of La Biennale di Venezia clearly shows, art and artists can help us imagine new modes of coexistence and infinite new possibilities of transformation.”

“Cecilia Alemani’s Exhibition imagines new harmonies, hitherto unthinkable cohabitations and surprising solutions - said President Roberto Cicutto - precisely because they distance themselves from anthropocentrism. A journey at the end of which there are no losers, but where new alliances are brought forth, generated by a dialogue between different beings (some perhaps even produced by machines) with all the natural elements that our planet (and perhaps others as well) presents to us. The travelling companions (the artists) who accompany the Curator all come from very different worlds. Cecilia tells us that there is a majority of female artists and non-binary subjects, a choice I endorse because it reflects the richness of the creative force of our time.”

“Many works are new productions created specifically for this edition. This is an important sign and proof of the great attention bestowed on the new generations of artists. It is no coincidence that the Curator has agreed to create the first College Arte in the Biennale’s history, which now flanks those dedicated to Cinema, Dance, Theatre, and Music. The past few years of the Colleges under the direct responsibility of their Artistic Directors, aided by tutors, have been very positive.”

“It seemed difficult to achieve this also for the Biennale Arte. But three female artists and one male artist, chosen from among the many candidates from all over the world, see their works exhibited out of competition in the International Exhibition, with equal pride of place as their already established colleagues who have been selected by the Curator.

This is an important step for La Biennale di Venezia which, through the activities of its ASAC and the establishment of an International Centre for Research on the Contemporary Arts, is becoming an increasingly important instrument of growth for female and male artists, further enhancing its historical role of producing exhibitions and festivals.”

“My wish for the 59th International Art Exhibition is that we can all immerse ourselves in the “re-enchantment of the world” that Cecilia evokes in her introduction. Perhaps this is a dream, which is another of the constituent elements of this Exhibition.”