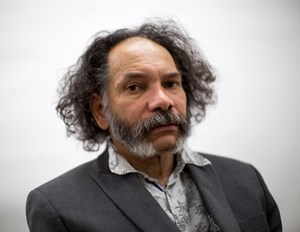 Guyanese-British artist Hew Locke (b.1959, Edinburgh) will be the next artist to undertake the annual Tate Britain Commission, to be unveiled in March 2022.

Guyanese-British artist Hew Locke (b.1959, Edinburgh) will be the next artist to undertake the annual Tate Britain Commission, to be unveiled in March 2022. Hew Locke will present his response to the unique architecture and context of the neo-classical Duveen Galleries at the heart of Tate Britain, in his most ambitious project to date.

Poetic and political, Hew Locke's sculptures are assembled from materials and sources that reference global histories and the symbols of our age; from coats-of-arms, trophies and weapons to plastic toys, boats and flowers. With an upbringing spanning the UK and Guyana, his work explores the languages of colonial and post-colonial power, questioning ideas of global cultural identities and how these representations are altered by the passage of time.

Hew Locke said: “Taking on the Tate Britain Commission during lockdown presented great practical challenges. But it also fed into the ideas behind it, combining with themes I’ve worked with over the years, making this an incredibly intense experience for me. I hope the energy I’ve invested will transmit itself to visitors to Tate Britain when it opens next March.”

Alex Farquharson, Director, Tate Britain, said: "Hew Locke’s beautiful, thought-provoking and painstakingly-researched artworks grapple with many of the questions that continue to dominate our social, cultural and historical discourse. His works are theatrical and deeply layered and this new commission will offer a new perspective on our Duveen Galleries. We are honoured that Locke will take on Tate Britain’s annual 2022 commission, further extending his extraordinary body of work."

Locke’s commission for Tate Britain coincides with Tate Britain’s major Winter exhibition, Life Between Islands: Caribbean British Art 1950s to Now. The exhibition traces the extraordinary breadth and impact of Caribbean British art through over 40 artists and includes four works from Locke’s Souvenir (2019) series. These sculptures are a critique of imperial pride and legacies of colonialism through a re-imagination of traditional busts of Queen Victoria and her family.

Earlier this year, Tate also acquired Hew Locke’s Armada 2019, with support from Art Fund. Armada is a mixed media installation of 45 votive boats, some reworked found models, and others made from scratch, suspended from the ceiling. Each boat is unique, in keeping with Locke’s characteristic use of wide-ranging materials and found objects. The materials lend a sense of playfulness to the almost toy-sized boats, which attract viewers to linger long enough to begin to unpick the work’s more serious themes of journeys physical and metaphysical, past and present. Armada will be on display at Tate Liverpool from 14 February 2022.

Hew Locke was born in Edinburgh, UK in 1959 and spent his formative years living in Georgetown, Guyana from 1966 to 1980. He obtained an MA in Sculpture from the Royal College of Art, London in1994. Locke has exhibited internationally and has been included in biennales from China to India to the Americas. His works are held in many public collections, including The Metropolitan Museum of Art, New York, Tate, The Victoria & Albert Museum and The British Museum. In 2010, Locke's work, Sikandar, was shortlisted for the Fourth Plinth, Trafalgar Square, London, UK. His work The Jurors was nominated for the PMSA's 2016 Marsh Award for excellence in public sculpture.