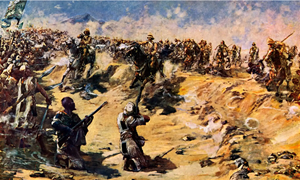 Items include valuable armor, weapons Y clothingand the banners of the fighters who resisted the British forces that they invaded and colonized Sudan more than 120 years ago.

The most controversial articles can be two skulls taken from the battlefield where Sudanese warriors tried to stop the advancing British and Egyptian army. During the fighting at Omdurman in 1898, British commanders used the first machine guns Y artillery to inflict thousands of casualties on lightly armed enemies.

In Khartoum, the repatriation of the human remains of those who fought in the battle is seen as particularly significant.

“We have to make a great campaign. These people are our brothers, our heroes. They unified and defended our country. It is a very special story of resistance to imperialism… Your descendants should see all this here”Dr. Eglal el-Malik, director of conservation at the National Corporation for Antiquities and Museums, told The Guardian.

Trophy hunting on battlefields by British soldiers was common during colonial campaigns and there are thousands of items from Sudan in British collections. The victories there were of particular importance to Victorian Britain, as they were seen as avenging the assassination of General Charles Gordon at Khartoum in 1885. The UK’s colonial rule lasted until 1956.

The two skulls, which are in the Anatomical Museum in Edinburgh, were taken by the explorer Reginald Koettlitz and Henry Wellcome, the pharmaceutical pioneer and businessman, and are among the large number of human remains that Western Europeans removed from Africa. These were often used in pseudoscientific research to support racist theories during and immediately after the rush to colonize the continent in the late 19th century.