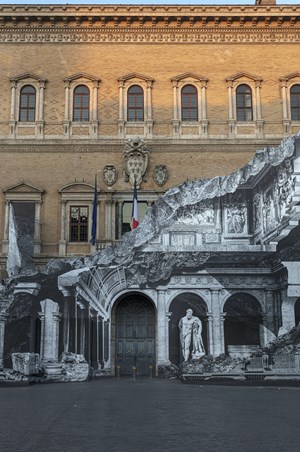 In July, renowned street artist JR unveiled the monumental work to be done on façade of the Farnese Palace in Italy, in Rome. This spectacular trompe-l'oeil of over 600 m², entitled Punto di Fuga (= vanishing point) displays on the palisades of Piazza Farnese and on a scaffolding structure.

In July, renowned street artist JR unveiled the monumental work to be done on façade of the Farnese Palace in Italy, in Rome. This spectacular trompe-l'oeil of over 600 m², entitled Punto di Fuga (= vanishing point) displays on the palisades of Piazza Farnese and on a scaffolding structure. The work reveals in its own way a real or revisited part of the palace's interior, and illustrates the Embassy's wish for the palace to remain "open for work" for the duration of its renovation project.

Emblematic for its architecture and fresco decorations, the Farnese Palace has always inspired artists. With Punto di Fuga (Rome, Palazzo Farnese, 2021), JR creates an architectural fantasy that orchestrates the encounter between spaces from the palace accurately represented - such as the colonnade of Antonio da Sangallo's vestibule or Salviati's frescoes in the Hall of the Splendors of the Farnese - that seem to emerge from a mineral material, suggesting a spatial as well as a temporal depth.

As a tribute to the history of the palace, the work restores the sculpture of the Farnese Hercules to its original place in the Cortile of the palace, as evidenced by engravings from the 16th and 17th centuries. The work is also a subtle echo of the projects JR has been doing since 2017 in San Francisco, New York and Montfermeil. His "Chronicles" series are, indeed, huge frescoes for which he photographs or films hundreds of people whom he stages in a narrative composition that offers a portrait of an era.

This intimate relationship between the past and the present is also reflected in the dialogue that JR wanted to establish with the facade of the Farnese Palace, highlighting and emphasizing elements of the architecture of Sangallo and Michelangelo, and inviting the visitor to rediscover details, from the Farnese coat of arms that emerge from the work to the geometric decorative system in red brick.

Made of Dibond (printed aluminium) panels fixed to scaffolding and vinyl tarpaulins on the palisades, the work is a perfect example of anamorphosis, a mathematical illusion and a visual game that constructs and deconstructs the image according to the position of the viewer. For the Farnese Palace, as for his previous architectural projects at the Louvre, Palazzo Strozzi or Trocadero, JR invites the visitor to play with the image he has constructed/deconstructed, and to find the perfect point of anamorphosis, located at the threshold of Piazza Farnese, in the middle of Via dei Baullari.