Steven Spielberg's E.T. the Extra Terrestrial for Sale at Juliens Auctions in December 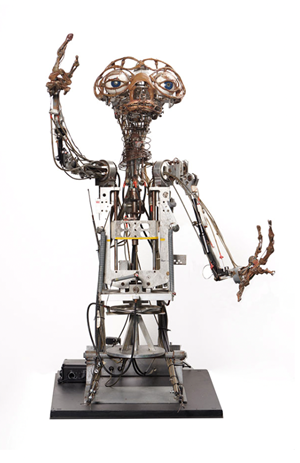 Headlining the auctions is the E.T. the Extra Terrestrial Hero “#1” Mechatronic filming model “actor” that brought the eponymous character to life in Steven Spielberg’s 1982 classic E.T. the Extra-Terrestrial (estimate: $2,000,000 - $3,000,000). Pre-dating modern CGI technology and effects, this one-of-a-kind cinematographic relic (constructed in 1981) features 85 points of movement and is regarded as an engineering masterpiece.

He was recognized for his work with three Oscars: one Special Achievement Academy Award for Best Visual Effects in 1977, for King Kong, one for Best Visual Effects for Alien and another in the same category for E.T. the Extra-Terrestrial. His crowning achievements were for the design and mechanical face and hand effects of King Kong, the head effects for Alien and the design and mechanical creations of the character of E.T.

This E.T. the Extra-Terrestrial Hero “#1” Mechatronic filming model was operated by twelve professional animators, all supervised and coordinated by Carlo Rambaldi. This mechatronic model of E.T. was constructed in 1981, made of duraluminium (a light yet strong aluminium alloy, one of the earliest types of age-hardenable aluminium alloys) with fully mechanical 85 points of movement including facial expressions, nose, eyes, mouth, lids movement, neck movement, shoulders, arms, hands, fingers, chest and abdomen rotations, via a combination of cables connected to electronic apparatus and mechanical elements. “Motion creates (e)motion” - Carlo Rambaldi

The E.T. the Extra-Terrestrial Hero “#1” Mechatronic filming model will be on public exhibition starting November 6th at Cineteca Milano - Museo Interattivo del Cinema (MIC) in Milan, Italy, who will host E.T. LA MOSTRA 1982-2022, a unique exhibit celebrating the 40th anniversary of Steven Spielberg’s masterpiece, featuring original restored material courtesy of Fondazione Carlo Rambaldi, plus photos, posters, drawings and memorabilia. The model and other artifacts from Rambaldi’s career will be on exhibit until January 2023.