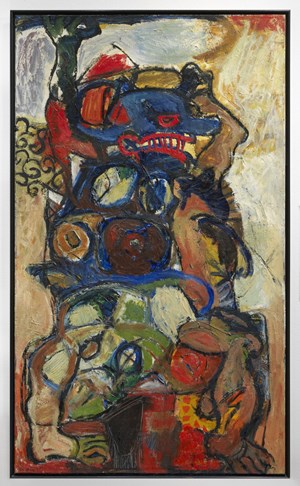 The Stedelijk Museum Amsterdam has acquired works by four artists featured in the exhibition Surinamese School. The purchases enrich the collection with fresh perspectives and place canonical art history within a broader context.

The Stedelijk Museum Amsterdam has acquired works by four artists featured in the exhibition Surinamese School. The purchases enrich the collection with fresh perspectives and place canonical art history within a broader context. The works of Ron Flu, Soeki Irodikromo, Rihana Jamaludin and Quintus Jan Telting sparkled in the important exhibition of Surinamese painting. Later this year, a second series of art acquisitions from the Surinamese School will be announced.

Rein Wolfs, director Stedelijk Museum Amsterdam: ‘Suriname and the Netherlands share a centuries-long history, which has also left its mark on art. Many Surinamese artists moved from the diaspora to the Netherlands, permanently or temporarily. Yet these stories are rarely found in the collection of the Stedelijk, even though some artists lived literally around the corner. Visitors to the ‘Surinamese School’, were inspired by the stories it told, and eager to see these historical narratives made more accessible. The purchase of these works takes us another step closer to preserving these narratives in our collection so that we can present a more complete picture of art history in the future.’ The works purchased are:

The Surinamese-Javanese artist Soeki Irodikromo (1945-2020) depicts themes and motifs from Javanese mythology in powerful, expressive paintings, batik textiles and ceramic sculptures. Irodikromo studied in both Paramaribo and Rotterdam. In the Netherlands, he was particularly influenced by the work of Cobra artists such as Karel Appel, drawn to their free expression and experimentation with visual language. Irodikromo became one of the best-known Surinamese artists of the post-war period, and belongs to the generation of Surinamese expressionists who relate to international modernism. Like many of his other paintings, Untitled (1971) possesses an intense symbolic resonance. In the painting, Irodikromo presents the character Bhima, one of the five Pandava brothers who, in the in the Indian Mahabharata story, fight the Kaurava for control of the kingdom. 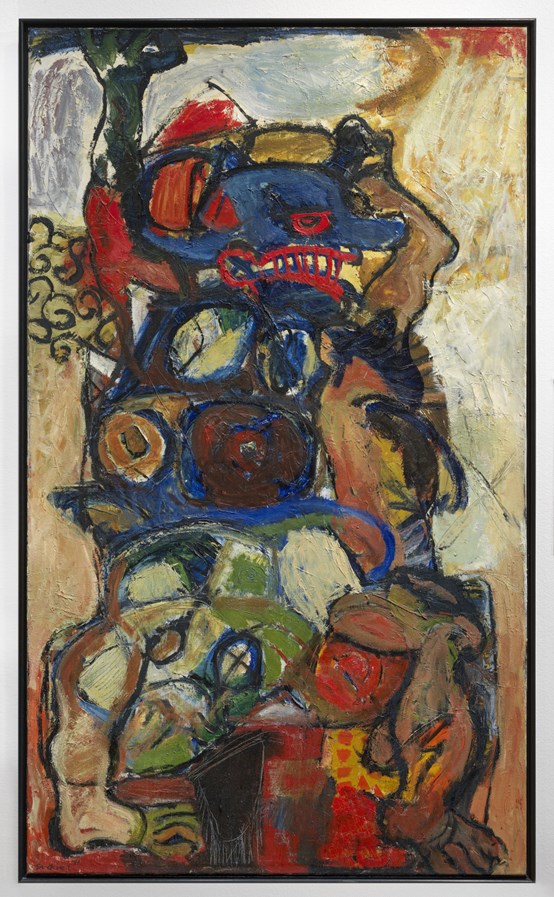 Rihana Jamaludin (1959) moved to the Netherlands in the 1980s where she studied at the Rietveld Academie. Jamaludin primarily experiments with graphic techniques such as linocuts, that she often develops in thematic series, of which The Storm Approaches (1989) and Dancing in the Storm (1989) are important examples. In the Storm series, she offers a poetic meditation of her relationship with her new homeland of the Netherlands by depicting (abstracted) figures who find themselves in the eye of a storm. Jamaludin grew up with the gentle, tropical trade winds and took time to grow accustomed to the strong Dutch winds – which eventually brought joy – and to accept her new environment. The works can be read as the expression of a personal struggle to feel at home somewhere again. With this, the works relate in general to the history of the Surinamese diaspora in the Netherlands, and refer to themes such as identity and belonging. 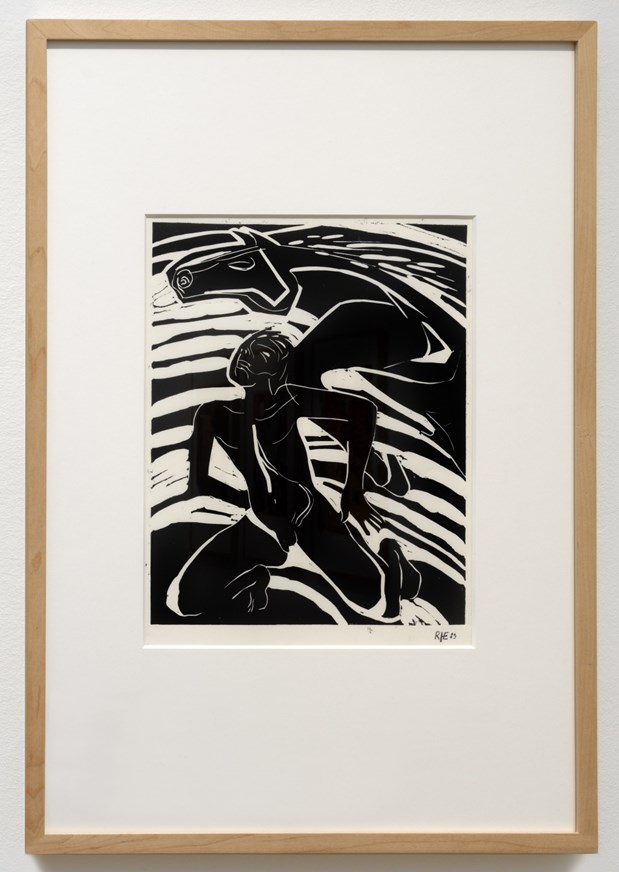 Quintus Jan Telting’s (1931-2003) extensive oeuvre, spanning a period of forty years, is rooted in a strong commitment to the Black Civil Rights Movement and the struggle for universal human dignity. In the late 1960s, the artist moved to Amsterdam where he lived and worked, and, in his unique way, engaged with compelling socio-political themes. Telting worked in a variety of styles; from realistic to highly expressionistic and abstract. In the 1980s, Telting adopted a more graphic and abstract visual language, of which the purchased work Opus #1481 is an example. Although Telting’s paintings are not often found in the collections of Dutch cultural institutions, they are greatly appreciated by Caribbean artists and private collectors. 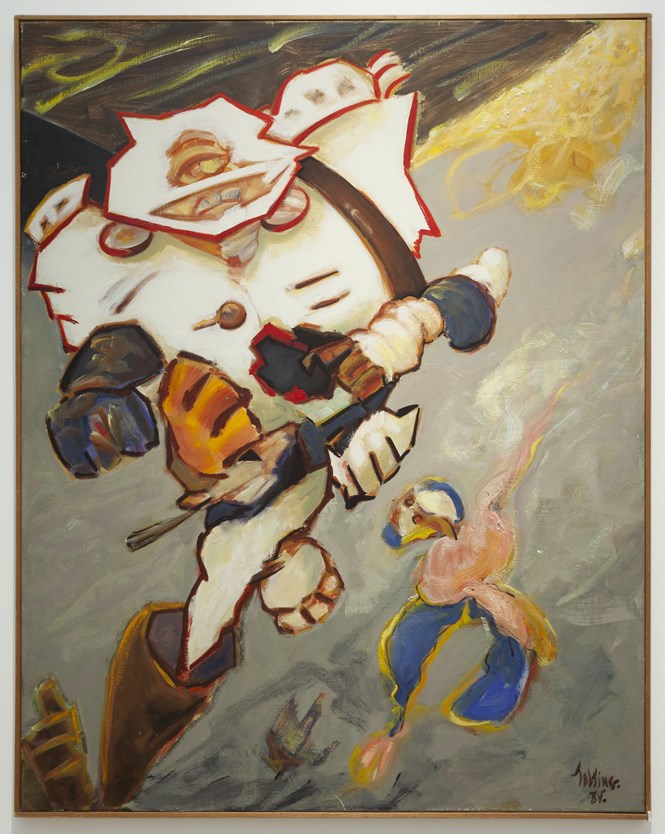 Ron Flu (1934) has become one of the best-known Surinamese artists in recent decades. His oeuvre encompasses a diversity of artistic styles, ranging from highly stylised images to dreamlike scenes and almost cartoonish images. Much of Flu’s painterly oeuvre reveals his sharp eye for social injustice, both in Suriname and beyond, with an emphasis on themes such as sex work, poverty and political events. He also paints scenes of everyday life, as can be seen in his early Cubist-influenced work Women of Prayer in the Palm Garden (1964). The painting portrays a scene from an Afro-Surinamese funerary ritual in the famous Palm Garden in Paramaribo. He painted this work in Suriname after returning from Amsterdam where he had studied architecture. 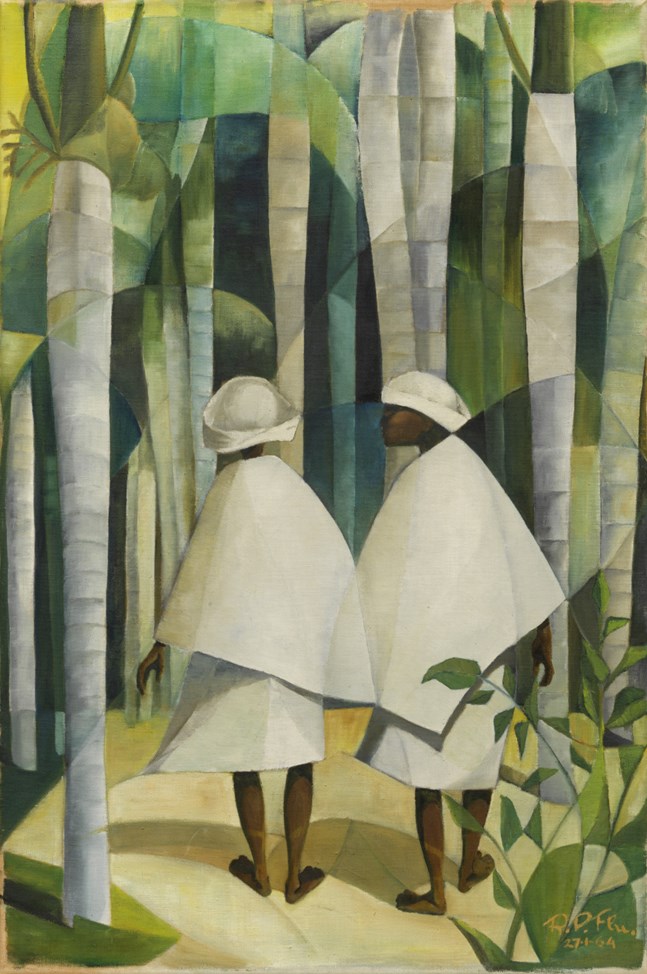