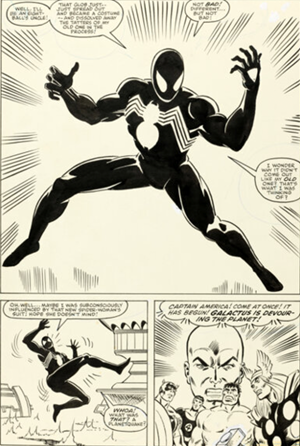 Spider-Man was already the star of the most expensive comic book ever sold at auction. As of Thursday, the Web-Slinger is also responsible for what is now the world's most valuable page of original comic book artwork.

Page 25 from 1984's Secret Wars No. 8, which tells the origin story of the Web-Slinger's now-iconic black costume, sold Thursday at Heritage Auctions for $3,360,000. Live bidding opened at $330,000, but it quickly became clear several bidders coveted Mike Zeck's artwork as it soared past the million-dollar mark. When it hit its final price, shattering all previous comic art records, the auction gallery erupted with cheers.

Marvel Comics' Secret Wars might have been created to sell toys, but this week it forever altered the comic-art landscape, as Page 24 from the same book sold moments earlier for $288,000.

"We could not be happier, especially for our consignor, who bought the art in the late 1980s and treasured these pages ever since," says Joe Mannarino, Heritage Auctions' New York Director of Comics & Comic Art. "Today's results prove what we've long been saying: Comic book art is as beloved and valuable as anything put on canvas."

Moments later, the Dallas-based auction house sold one of the few surviving copies of Action Comics No. 1 for $3,180,000. That makes this CGC Fine 6.0 copy of Superman's debut the second-most-expensive comic ever offered by the auction house, behind only the finest-known copy of Spider-Man's first web-sling through Amazing Fantasy No. 15, which sold for $3.6 million last year to become the world's most valuable comic book sold at auction.

It's also the most expensive copy of Action Comics No. 1 ever sold by an auction house.