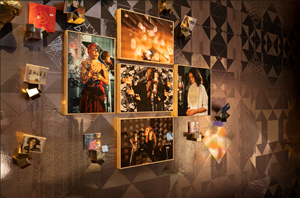 The exhibition, which won the prestigious award for the Best National Participation at La Biennale di Venezia 2022, is set for the Turner Contemporary in Margate next February, before heading to Leeds Art Gallery in May.

Sonia Boyce’s Golden Lion-winning exhibition Feeling Her Way will come to the UK in 2023, the British Council has announced.

The exhibition, which won the prestigious award for the Best National Participation at La Biennale di Venezia 2022, is set for the Turner Contemporary in Margate next February, before heading to Leeds Art Gallery in May.

Feeling Her Way, which draws to a close in Venice next month, was commissioned by the British Council for the British Pavilion. The artwork combines video, collage, music and sculpture to present a body of work that centres around the vocal experimentation of five Black female musicians.

It features award-winning, intergenerational musicians Jacqui Dankworth, Poppy Ajudha, Sofia Jernberg, Tanita Tikaram, and composer Errollyn Wallen, who are brought together by Boyce (both at Abbey Road Studios in London and Atlantis Studios in Stockholm) to improvise, interact and play with their voices. Colour-tinted video works take centre stage among Boyce’s signature tessellating wallpapers and golden 3-D geometric structures, which bring the audience into the work through their highly reflective surfaces.

The commission expands on Boyce’s Devotional Collection, built over 20+ years and spanning more than three centuries, which honours the substantial contribution of Black British female musicians to the lives of the public and to transnational culture.

Speaking about the upcoming tour was Skinder Hundal, Global Director of Arts at the British Council. He said: "Sonia Boyce's Golden Lion win at the Venice Biennale was a momentous moment for both Sonia and the UK, recognising her significant contribution and legacy to UK arts. We’re so excited, then, to bring this award-winning exhibition to both Margate and Leeds where visitors can expect an immersive experience which speaks of hope, joy and freedom.”

With the support of the Art Fund, the exhibition will run at the Turner Contemporary, Margate from 4 February- 7 May 2023.

Clarrie Wallis, Turner Contemporary Director said: “Turner Contemporary is delighted to collaborate with the British Council on the tour of Sonia Boyce’s exhibition Feeling Her Way in 2023. Supporting artists at pivotal moments in their careers and exhibiting bold new work relevant to a broad range of audiences is central to our exhibition programme. This joyful, ambitious installation celebrates female creativity and collaboration, and we look forward to presenting it in Margate next spring.”

It will then head to Leeds Art Gallery from 25 May, with the exhibition running until 5 November.

Jane Bhoyroo, Principal Keeper, Leeds Art Gallery said: “We are thrilled to be working with Sonia Boyce and the British Council to present ‘Feeling Her Way’ in Leeds. The opportunity to bring this moving and inspiring installation to the city will enable our diverse audiences to experience this major work by one of the UK’s most distinguished artists”.

The British Council has been responsible for the British Pavilion at the International Art and Architecture Exhibitions of La Biennale di Venezia since 1937, showcasing the best of the UK's artists, architects, designers and curators.

The exhibition and Sonia’s personal journey will feature on the upcoming BBC documentary series Imagine, which airs on Sunday, 7 November on BBC One.